Counting down to Trump's State of the Union

The response of the Democrat politicians speak volumes.

“The White House wrote the memo” - why not Putin – let’s
go for broke!- the Democrats are apoplectic and in obvious panic.

And yet the entirety of the media is ignoring this story, treating it as if it didn’t exist,or is just a big “nothingburger”. 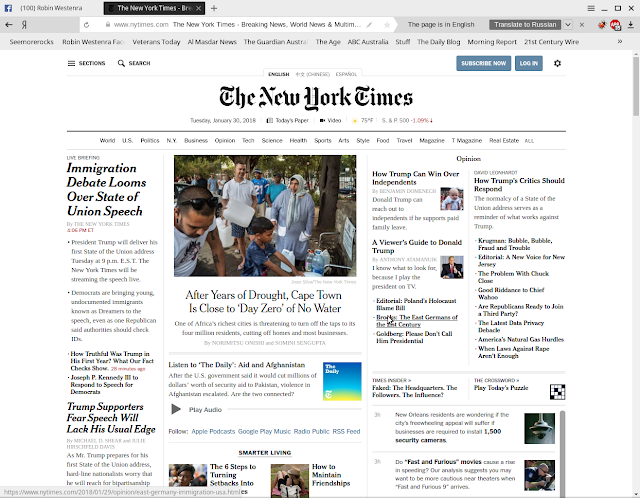 
(UPDATED 1:20 PM EST SEE BOTTOM) Stock Markets around the world are reacting very badly to the pending release of a Memo by the House Permanent Committee on Intelligence, outlining abuses of the Foreign Intelligence Surveillance Act (FISA).  Insiders at the stock market here in New York City tell me that the information contained in the memo is so bad, the American people might actually rise-up and revolt against the federal government.

According to sources who I spoke with personally at the Stock Market on Wall Street, several portions of the memo - which has apparently already LEAKED to the financial big shots -- show the FBI and US Justice Department routinely manufactured FAKE INTELLIGENCE and used that fake material to LIE TO COURTS in order to gain wiretap and eavesdropping on tens-of-thousands of Americans; mainly over their POLITICAL BELIEFS AND ACTIVITIES.
The sources in New York City also tell me that the Democrat Party will be so shattered by the revelations, they will not be able to survive politically!
The abuses outlined in the memo all began under the Obama regime and were perpetrated against almost anyone who opposed any government policy.
One example provided to me was the tracking of nine-hundred-million telephone calls! Sources tell me that "Key Words" triggered automated recording devices so the Obama regime could look-into anyone who talked with anyone else about certain political topics.  They also say that "key words" were used to gather literally tens-of-millions of emails from folks who spoke to others about matters political; mostly conservatives and Republicans!!!!
The sources also say this intercepted material was given out to UNAUTHORIZED third-party contractors who did not have security clearances and did not have any need to know the information.  They also say the material was not contained and likely went to totally unauthorized other entities for analysis and political exploitation.
Market executives here in New York are seeing quite a number of "big players" in the market, pulling out their money for fear of widespread social unrest coming almost immediately after release of the information from the FISA Abuse-memo.
As of 10:30 AM eastern US time, world Stock Markets are as follows:

The Dow Jones Industrial Average fell more than 400 points Tuesday, the largest drop in the key stock index since June 2016.

The Dow dropped to 26,028 on Tuesday afternoon, roughly 400 points below Monday’s close, before ticking back upward by 1:40 p.m. It’s the second straight day of losses for the Dow, and largest single-day drop under President Trump.

Stocks have skyrocketed over the course of Trump’s first year in office upon booming consumer confidence and the promise of a major corporate tax cut. Trump and his aides have taken credit for the massive rise, calling it a referendum on and reflection of their economic agenda.

Even with the drop, the Dow is up more than 8,000 points since Trump was elected in 2016. The Dow closed at a record high more frequently in 2017 than in any other year in its history, breaking the mark of 69 record highs set in 1995.
But the booming equities market has triggered concern among policymakers that investors could be overvaluing stocks, setting up a nasty correction. Wall Street veterans say traders see an approaching end to the Trump stock boom, partially due to rising interest rates around the world.

As economies around the world continue recovering from the economic crisis, central banks are slowly drawing back the stimulus they used to ignite the process.

The Federal Reserve is expected to hike rates at least twice this year after three rate hikes in 2017. Bringing rates back toward the historic neutral position gives the Fed more room to respond to the next crisis and would likely put a damper on some equities investment.