The following is related to the following article from Global Research.ca - which cannot be accessed at present

U.S. President Barack Obama apparently is going ahead with his plan for NATO missiles to be placed in Ukraine aimed against Moscow, but found a way to do it that won’t violate the warnings by Russia’s President Vladimir Putin against Washington’s directly supplying those arms to Ukraine (such as is demanded of Obama by congressional Republicans, and even by a few hawkish Democrats — all passionate supporters of Hillary Clinton).

Obama’s subordinate (or dependent local leader), the President of Ukraine, Petro Poroshenko, is now arranging to receive those weapons via a less direct channel; and this arrangement couldn’t happen if the U.S. White House were opposed to it.

The idea might even have originated inside the White House.

Poroshenko's Big Haul: What Exactly Did Ukraine Bring Back From the UAE?
Ukrainian President Petro Poroshenko has come back from the UAE, and is reported to have racked up nearly 20 contracts on the supply of weaponry to Ukraine. 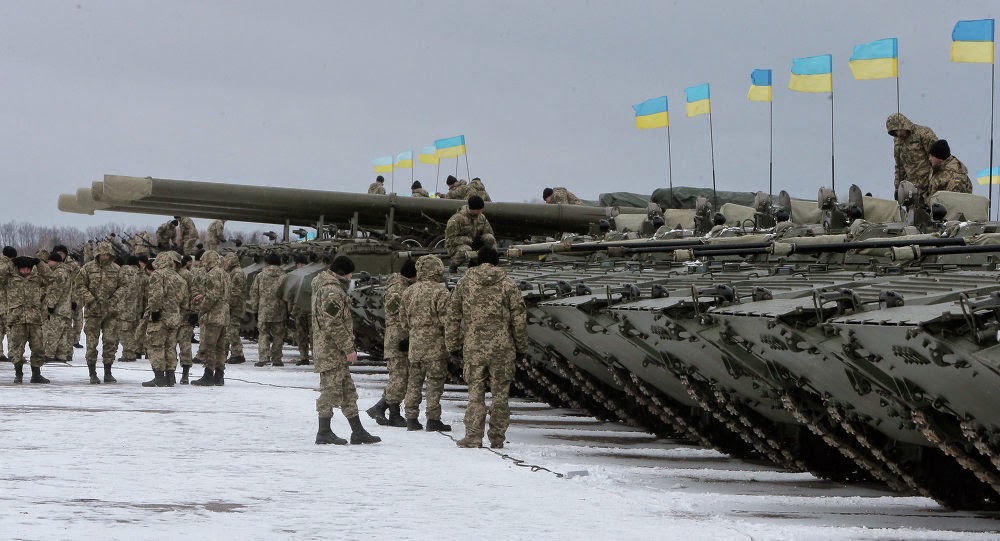 Ukrainian President Petro Poroshenko has returned home from the IDEX-2015 arms expo, where he was reported to have signed nearly 20 contracts for the supply of weapons with various suppliers.

But the details of Ukraine's purchases remain murky, and experts have questioned the timing and necessity of the purchases.

Following his tour of the weapons showroom and shortly before leaving for home, Poroshenko told reporters that "over the course of the exhibition, Ukraine has signed about 20 contracts for the supply of arms; agreements have been signed on the provision of weaponry to Ukraine by European, American and Middle Eastern companies."

Focusing on the much-discussed contract with the United Arab Emirates announced yesterday, Poroshenko noted that Ukraine and the UAE already have an established history of arms cooperation, explaining that the UAE "were the first to sell the Cougar, the Spartan, and other armored vehicles to Ukraine."

The APCs in question, numbering a few dozen units, "have been effectively used by our armed forces in the combat area," according to Poroshenko. The president noted that "today we have significantly expanded the range of deliveries," without going into any more specifics.

Weapons manufacturers believed to be involved in deals with Ukraine have thus far avoided providing any further details on the contracts, but the Russian business newspaper Kommersant noted, citing unnamed sources, that Ukraine had been looking into stocking up on armored vehicles, mortars, and anti-tank systems.

Military observer Vladislav Shurigin is skeptical about the Ukrainian-Emirati deal, telling Radio Sputnik that ultimately, "it is unclear what Poroshenko managed to acquire while in the Emirates, and whether he acquired anything at all.

First off, Ukraine's treasury is empty. Secondly, the Emirates themselves do not produce weaponry, but serve only as a platform to demonstrate military equipment. Thirdly, we need to find out who sold Kiev what, if anything. I do not rule out this this was all a PR stunt."

Shurigin notes that the biggest problem for the Ukrainian armed forces at present is their lack of cash. He noted that while the army "is without question in need of rearmament, as the saying goes, [they need to do it] 'on the heap'.

Previously, Ukraine received much of its modern equipment for free from its partners, the US and some European countries, the Poles in particular. They purchased ammunition with American money. But Ukraine itself did not actually buy much of anything."

Discussing what the army really needs, Shurigin notes that it "is in need of almost everything; it has spent most of the stocks that it had. The country needs modern artillery, modern means of reconnaissance, anti-tank weapons, small arms. One of the challenges faced by those planning to arm Ukraine lies in the fact that it will be necessary to virtually recreate it entirely from the ground up, based on the principles of a new army. The Ukrainian army as it exists today is, at best, an army of the mid-20th century."

Without Proper Training and Motivation, New Hardware Will Remain A Useless Heap of Metal

Ukraine's Army Recruiting Efforts are Failing: Here are Some of the Reasons
Military expert Alexandr Goltz agrees with Shurigin on the need to build up a new army, but disagrees about the need to purchase new weapons from the Emiratis.

Goltz told Ukrainian news site Gordon that "when it comes to 'smashing the enemy', Ukraine can forget about it for at least 5 years, until it rebuilds its armed forces. Without this, whatever new weaponry is bought, it will be a heap of metal. Ukraine needs to create a new, motivated, well-paid army,"

Goltz adds that it is doubtful what real assistance a country like the UAE can provide to Ukraine, noting that the country has "no serious military industry comparable to that of Ukraine's, for example."

On Wednesday, Ukrainian parliamentary representative Andrei Paruby, who is on a visit to the US, was reported to have presented US officials with a list of weaponry the country may need, including everything from radars, drones and radio communications equipment to anti-tank complexes.

Paruby has handed the list over to the Obama Administration officials and to other officials "directly related to the decision-making." Paruby stated that in his view, "the US plays a deciding factor.

After the US, the leaders of European countries, of Canada, will support this initiative and will more actively begin to assist Ukraine." On Tuesday US Secretary of State John Kerry noted that the question of providing Ukraine with weaponry is still under discussion.

In an interview with Fox News, Ukraine's prime minister Arseniy Yatsenyuk made a desperate plea to the US to arm Ukraine so that the two nations could fight together against Putin.

Fox News once again manages to embarrass itself by running this manipulative and pathetic appeal to steer the American public towards more confrontation with Russia. In the interview, Yatsenyuk seems desperate and very stressed. Maybe because he feels betrayed by the US and Europe?

He urges Americans to join the Kiev regime in the war against Russia: