This article originally appeared at Segodnya. It was translated forRussia Insider by Johanna Ganyukova

After yet another fall in the Ukrainian currency, the Hryvnia, the minimum wage in Ukraine has reached an all-time low: 1218 Hryvnia is now worth less than 43 US dollars.
Even in the impoverished countries of Bangladesh, Ghana and Zambia, people receive around 4 dollars more. Significantly wealthier are those in the African countries of Lesotho, Gambia and Chad, where the minimum wage is as high as 51 dollars.
By comparison, the highest global minimum wage can be found in Australia, where workers are paid no less than 2700 dollars (a month).
It is a sobering thought that the next national wage increase is not due in Ukraine till December 2015.

Ukraine Enters Hyperinflation: Currency Trading Halted, "Soon We Will Walk Around With Suitcases For Cash"

Yesterday we summarized the most recent economic, political and social situation in Ukraine as follows:


"A year or so on from the last coup in Ukraine, Ukraine’s former Prime Minister Sergey Arbuzov told TASS, with growing popular discontent, "another state coup can’t be ruled out in Ukraine." As the cease-fire deal hangs torn and tattered in the Debaltseve winds, the nation is a mess: a new gas dispute looms as Gazprom demands upfront payments; capital controls have been tightened as the $17.5bn IMF loan may not be enough; and the central bank governor faces prosecution as the economy craters. All of these factors have driven massive outflows from Ukraine and the Hryvnia has crashed to over 33 to the USD - a record high (and 70% devaluation from the last coup)."

So as the Ukraine government watches its country go down in flames, with the blessings of the US State Department of course, it decided to take action. According to Reuters, with the hryvnia in free fall (see above) the central bank tried to call a halt on Wednesday by banning banks from buying foreign currency on behalf of their clients for the rest of this week.


Although banks could still trade with each other, by mid-morning there were no registered trades at any rate, leaving the currency in limbo. The previous day, the central bank rate based on reported trades had fallen 11 percent against the dollar.


Exchange kiosks on the streets in Kiev were selling limited amounts of dollars for 39 hryvnias, around 20 percent worse than the rates advertised in the windows of commercial banks where dollars were not available. This compares to the official rate of 33 USDUAH posted yesterday, a rate which will continue in freefall, now that the central bank has no more gold left to sell (it's mysteriously gone), and virtually no foreign reserves.

Following the closing of the FX market closing, the central bank has been able to artificially dictate the interbank rate, which it reduced from 32 to 24 hryvnias as of 12:45 p.m. local time. The artificial rate only affects exporters, who are forced to sell 75 percent of their foreign currency revenue to the National Bank at the rate.

Even the Ukraine government is shocked by what is going on: "I learned this morning on the Internet that the National Bank of Ukraine has, as usual on its own without any sort of consultations, made the decision to close the interbank currency market, which will absolutely not add to the stability of the national currency that the national bank is responsible for. This situation has a very complex and negative influence on the country's economy," Ukrainian Prime Minister Arseniy Yatsenyuk said.

The Ukrainian National Bank chairwoman Valeriya Hontareva, however, contradicted the Prime Minister's statement. "We coordinate all administrative measures with the International Monetary Fund first, and only then implement them," Hontareva told reporters.

In short: total chaos, which is indicative of any country's collapse into the hyperinflationary abyss.

It gets better. According to RIA, on Tuesday, Ukrainian television channel Ukraina announced that with the new exchange rate, the minimum wage in Ukraine stands at around $42.90 per month, which according to the channel, is lower than in Ghana or Zambia. There are currently no plans to raise the minimum wage until December.

Behold hyperinflation: "Food prices among producers rose 57.1 percent, with the price for grains and vegetables rising 91 percent from January 2014 to January 2015, while the official inflation rate over the period totaled 28.5 percent. Meanwhile, Ukrainian consumers responded to economic difficulties by cutting their spending in hryvnias by 22.6 percent, which amounts to an almost 40 percent decrease in real consumption."

And the punchline: "A construction worker exchanging dollars at a kiosk in a grocery shop in return for a bag filled with thousands of hryvnia, laughed and told shoppers: "Soon we will have to walk around with suitcases for cash, like in the 1990s.""

Which is ironic, because the central banks of "developed world" nations, most of which are now facing over 300% debt to consolidated GDP, would define Ukraine's imminent hyperinflation with just one word: "success."

This Is What Happens To Gold In A Hyperinflationary Currency Crisis: Ukraine Edition

As Ukraine's socio-economic situation goes from wost to worst-er, today's announcement by President Poroshenko that the government will take actions to stabilize the currency (which as we previously noted, appears to be heading for hyperinflation) has Ukrainians rushing for the exits into precious metals... with only one goal in mind - wealth preservation.

This is what gold does in a fiat-currency crisis. Now if only Ukraine actually still had some gold...

Furthermore, according to RIA, on Tuesday, Ukrainian television channel Ukraina announced that with the new exchange rate, the minimum wage in Ukraine stands at around $42.90 per month, which according to the channel, is lower than in Ghana or Zambia.

There are currently no plans to raise the minimum wage until December.
Behold hyperinflation:


"Food prices among producers rose 57.1 percent, with the price for grains and vegetables rising 91 percent from January 2014 to January 2015, while the official inflation rate over the period totaled 28.5 percent.

Meanwhile, Ukrainian consumers responded to economic difficulties by cutting their spending in hryvnias by 22.6 percent, which amounts to an almost 40 percent decrease in real consumption."

Nothing to fear though: we are sure all that hard-earned US taxpayer-lent money will be safe and sound.

It's not as if the Ukrainian state brought this situation on itself. It was all,of course, a plot from the Kremlin following a "roadmap" for the annexation of eastern Ukraine. Blame Putin! 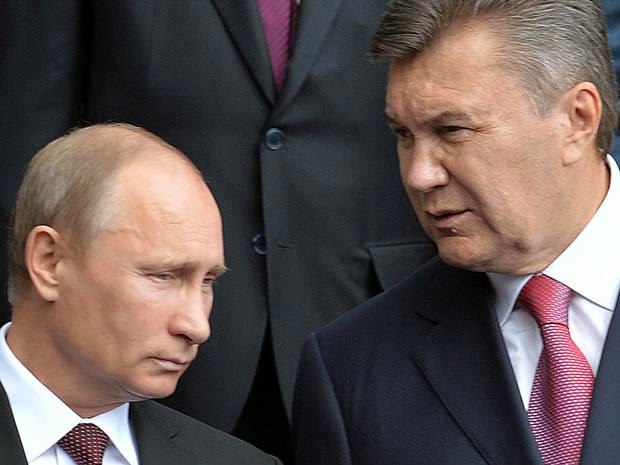 Moscow has been planning to annex parts of Ukraine for more than 12 months, according to sensational claims made in a Russian newspaper.

Vladimir Putin’s office reportedly compiled a detailed roadmap of how a "pro-Russian drift" could allow it to seize Crimea and some eastern provinces, just a few weeks prior to the ousting of President Viktor Yanukovych and the start of the Ukrainian crisis.

According to a document allegedly leaked to the Novaya Gazeta newspaper, Russia had identified Mr Yanukovych as “politically bankrupt”, and outlined a plan by which a “coup” would set in motion events ultimately leading to Russian expansion.

The extraordinary claims made by the newspaper, which is one of the last independent media outlets in the country and was recently nominated for the 2015 Nobel Peace Prize for its investigations, could not be independently verified.

The alleged document, translated into English by the Kyiv Post, was reportedly provided to Mr Putin’s office for consideration between 4 and 12 February 2014 – the same month that Mr Yanukovych was removed by the Ukrainian parliament.

Novaya Gazeta reported in its introduction that the events that have followed in the past year in Ukraine resemble with “a great deal of correlation” the “step-by-step [guide to] the basis, political and PR logistics of Russia's interference into Ukrainian affairs and estrangement from Ukraine of Crimea and eastern provinces”.

Among the highlighted details of the plan are “a pejorative assessment of Yanukovych, whom Russia later presented as a victim of a coup and the only legitimate leader of Ukraine”.

It details the eastern, cross-border regions of “Donbas” and “Dnepr”, among others, as “euroregions” that are “legitimate from the point of view of the European Union”.
“Using [this] instrument, Russia should achieve deals on cross-border cooperation and then establish direct interstate relations with the Ukrainian territories where stable pro-Russian electoral sentiments exist,” the alleged document reads.

The document also suggests that Russia’s support for such territories “will obviously be a burden for the budget in the current situation”, but adds that “in geopolitical perspective it will give us a priceless gain – our country will receive access to new demographic resources and highly-qualified personnel in the industrial and transport sphere”.

One section of the document appears to lay out the need for the destabilisation of “events in western Ukraine”. “To launch the process of the ‘pro-Russian drift’ of Crimean and Eastern Ukrainian territories, it's needed to create the events that would give this process political legitimacy and moral justification, beforehand,” it reads.

In his most recent comments on the Ukrainian crisis during an interview with Russian state TV, Mr Putin repeated denials that his government was providing support to rebels in eastern Ukraine.

The Novaya Gazeta report, issued on Tuesday evening, came as a long-awaited truce appeared to be taking hold in eastern Ukraine with the start of the withdrawal of heavy weapons from the front line.

A truce agreed in Minsk by Russia, Ukraine, France and Germany was due begin on 15 February, and after a shaky start seemed on Wednesday to have halted most of the violence on the frontline.

The OSCE says it cannot yet verify the withdrawal because the sides have not said how many guns were in place before the truce. It reported some shelling and shooting at various locations, including near Shyrokyne, a coastal town on the road to Mariupol where Kiev has also reported fighting.


The Kiev military nevertheless said the number of ceasefire violations had "significantly decreased" for a second straight night, and its account of the past 24 hours was the calmest since the truce was agreed in the Belarusian capital.

You can read the “bombshell’ in an English translation in the Kyiv Post HERE, or in the original article in Novaya Gazeta HERE