Look everywhere except for the most likely cause.

“Bizarre, milky rain” falls for days by most contaminated nuclear site in U.S. 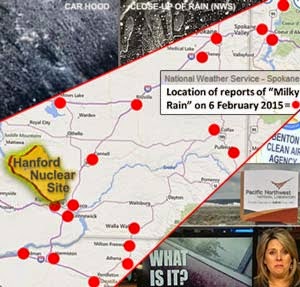 CNN, Feb 7, 2015 (emphasis added): Mysterious filth rained down… onto Washington and Oregon on Friday… described it as “white stuff” or “milky rain.” Rainwater filling a collector at the NWS [NOAA's National Weather Service] looked like it was pulled from a muddy river.

Reuters, Feb 10, 2015: “We’re fairly certain it came from Nevada” [NWS] scientist Mary Wister said… federal scientists at the… Hanford nuclear site have suggested… winds may have carried ash… from Japan‘s Sakurajima volcano… [Wister] cautioned that without a chemical analysis of the milky rain, it would be impossible to pinpoint its origins.

KNDU, Feb 10, 2015: Rare ‘Milky Rain’ Most Likely Traveled From Ancient Lake in Oregon…nearly 500 miles away… [The] substance has not yet been scientifically confirmed…Originally, a large storm that hit northwest Nevada was blamed… “But the trajectory just didn’t add up,” said [NWS] meteorologist Mary Wister… “The wind direction would have carried the dust into western Montana.”

Oregonian, Feb 9, 2015: ‘Milky rain’ falling in Oregon, Washington still a big mystery to meteorologists — Meteorologists are stumped by the spooky “milky rain”… over the past two days… “There are a whole bunch of theories,” [NWS meteorologist Robert Cramp] said. “But the reports are coming in from a limited area“… concentrated in the Columbia River Basin. — CAPTION: A bizarre, murky rain is reportedly leaving chalky spots on cars… [NWS] is reportedly testing it.

KPLU, Feb 10, 2015: Scientists from thePacific Northwest National Laboratory [next to Hanford] intend to study the muddy rain this week. They have a theory that the sediment is ash from a Japanese volcano… the Benton Clean Air Agency [Hanford is in Benton County] also intends to test samples. They think the sediment might be from a southeast Oregon lake, a recently burned area in Oregon or possibly even Nevada dust… [NWS] also has a sample, but says it won’t test it… a weather service spokesman said the sample was likely contaminated [and its] whereabouts… couldn’t be accounted for.

KUOW, Feb 9, 2015: Much of eastern Washington and Oregon was pelted with a dirty rain, but so far scientists do not agree on a cause… Scientists say… this 200-mile event… isunusual. Pacific Northwest National Laboratory… plans to test samples this week.

Live Science, Feb 13, 2015: Robin Priddy, director of Benton Clean Air [Agency said] it’s unclear where the dust came from, especially since it was a windless day, Priddy told Live Science…  it’s rare to see muddy rain in the winter, and the rain’s mysterious white color still has researchers scratching their heads… Though researchers at Benton Clean Air took samples… lab technicians weren’t tasked with figuring out the origins of the sediment…Pacific Northwest National Laboratory also took samples, though later found they didn’t collect enough to analyze, said Mary Beckman, a lab spokeswoman. But the lab never planned to do a real study on the material, she said. “It was purely out of curiosity.”

Mary Wister, NOAA NWS: “This is something that I have not personally seen in my career.”

Robin Priddy, Benton Clear Air Agency: “As much dust as we have around… it usually comes in sideways, not from the top when the air is still. Obviously, we were aware something pretty unusual was going on.”

Posted by seemorerocks at 17:22