The US regime change operation in Venezuela 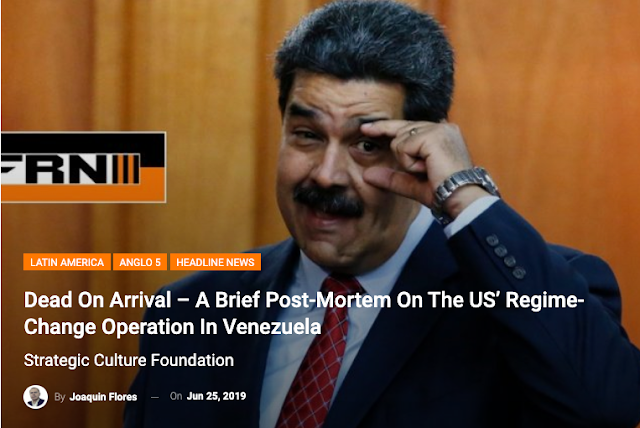 
From: Strategic Culture – Joaquin Flores
They say hindsight is 20/20, and nothing exemplifies that more than the kind of post-mortem that can be done on the failed attempt by the US to overthrow the government of Venezuela.  Working through the lack of options that the US has in terms of regime-change in Venezuela, should lead towards a higher degree of investor confidence in the Bolivarian Republic.
We understand that there are ultimately only three ways to attack a target state until it collapses:
Then we can see that US has failed in the first two. While the US does appear on the rhetorical level to be willing to embargo the rest of planet earth, they would have to effectively do so in order to embargo Venezuela. By promoting globalization as a virtue, at the institutional level, and not simply recognizing it with problems and all as an inherent component of market economies, the US has withered its own ability to control other civilizations and states in the world’s growing multipolar system.
While the US can place sanctions on Venezuela, and get some countries to even go along with these sanctions, it only improves or strengthens the role and power of those middle-man countries like China which act as ‘value transactors’ of Venezuelan commodities into the global economy. Because it is impossible to ‘cut’ China out of the global economy, it is impossible to cut Venezuela out as well.  Given how much China is invested into Venezuela’s economy, as the Wall Street Journal notes, there’s little chance that will change either.
Despite an effort to unseat the democratically elected PSUV government, we were offered some keen insights into the US’s own self-realization regarding their failed process, and publicly so by Pompeo himself.
The level of honesty coming from the Trump administration in the US is refreshing even as it is only half the truth. When we read that Pompeo has explained that the Venezuelan opposition is ‘divided’, this is of course nothing other than good news for those concerned with regional stability, economic development, and a de-escalation of tensions that can lead towards war and instability.
It is also tremendously true, even if Pompeo doesn’t really explain why it’s the case, at least not entirely. But the facticity of the claim in itself reveals that there can be no US sponsored ‘internal regime change’ in Venezuela. Both the governments of Brazil and Colombia – close US allies under their present administrations – have ruled out any sort of military intervention into Venezuela.
Pompeo’s Confession
In comments published by the Washington Post, from an audio recording, it was reported then that Pompeo admitted that:
“We were trying to support various religious institutions so that the opposition would unite,” Pompeo remarked, going on to explain that “they [the opposition] remain divided on how to confront the Maduro regime.”
This admission came on the heels of the recorded statement to the WP, where he previously explained:
“Our dilemma, which is to keep the (Venezuelan) opposition together, has turned out to be tremendously difficult,”
He continued, saying that:
“At the moment when (Nicolás) Maduro leaves, everyone will raise their hands and say: ‘Choose me, I’m the next president of Venezuela.’”

Subsequent to that comment, he would explain that an excess of 40 different Venezuelan opposition politicians have come forward expressing their view that as Guaido is but a transitional figure, that they ought to be ‘selected’ by the US to win an actual (i.e. staged) election. This would be, ideally for them, an election that comes on the heels of an absolute restructuring of the security apparatus of Venezuela. The idea would be to ensure the marginalization of the PSUV forces from the electoral process, a ‘counter-revolution’ of sorts. The staged elections involving various opposition parties and leaders would be an afterthought in all reality. And still, there is no consensus among this opposition on who should lead. Pompeo would continue to explain:
“Our dilemma, which is to keep the (Venezuelan) opposition together, has turned out to be extremely difficult […] The moment Maduro leaves, everybody’s going to raise their hands , ‘Take me, I’m the next president of Venezuela.’”
Pompeo expressed tremendous exasperation with this state of affairs, commenting that his realization of the problem isn’t one that came about recently, but is one in fact he was aware of since he began his work in the Trump administration with the CIA. To that point he stressed that these are problems which not only manifested themselves in “public during these last months, but since the day I became director of the CIA (Central Intelligence Agency), this was something that He was at the center of what President Trump was trying to do. ”
That’s to say, Pompeo understood this problem all along. The whole project was dead on arrival.
There is no military option
Given that Venezuela can’t really be effectively more embargoed than it presently is, the US is left with one option remaining. Yes, that leaves military options, nominally on the table in terms of US pressure tactics and techniques. But the reality is that these are something much less tangible than the US has historically relied upon. A lot of this has to do with the general decline of the US military in comparative terms. While the US maintains something approximating its military capacity in absolute terms, compared to a decade or two ago, it has not managed to maintain that in relative or comparative terms. The ‘gap’ between the U.S and other rising powers, military speaking – and this reflects economic changes as well – has become smaller.  Even the Washington Post, as well as other mainstream US billionaire blogs, has admitted as much.
The fact of Venezuela’s anti-air capabilities in the form of the S-300 system are enough to bring unacceptable levels of material and human loss to the US air forces (Navy/Marine, Army, etc.). These could potentially bring the number of downed US fighters to many dozens in the first hours, of the first sortie. The loss of prestige alongside the scores of Cindy Sheehans this would produce, makes the venture a non-starter from go.
So this leaves the US in something of a conundrum. It has indeed brought Venezuela to the near point of collapse over the course of recent years, creating an economic catastrophe through a combination of sanctions and the manipulation of oil prices. But it failed to push it over the edge, and its thanks to a growing and new international consensus that this was the case.
Venezuelan leadership for its part has admitted also that there are a number of measures and policies that ought to have been in place, long term economic measure in terms of diversifying the economy that would have helped to off-set the worst of the damage done by the manipulated attack on Venezuela’s economy. We’ll recall that Russia experienced similar, based in the same manipulation of oil prices, leading to a temporary ‘shock’ to the Ruble, which plummeted in value relative to the Dollar overnight, stoking a major crisis between June and December of 2014. Russia was in a better position to manage this, and though without hiccups, has managed to avoid the sorts of repercussions that Venezuela has faced.
Strong reasons for optimism and the coming bullish trend
The inability of the US to move further against Venezuela’s economy has only given Caracas time, and organization, to work around them. These work-around measures by Venezuela can improve, but the distance between the economic attacks from the US, and the operationalizing of Guiado in a coup gambit, was too great for the US to use them in combination in an effective way.
It’s worth noting also that the general ‘game plan’ of the US has been effectively written about, expounded publicly, and absorbed by private intelligence agencies and government networks alike. The science and art of regime change has given rise to the science and art of the counter-coup.
When we understand that there is no really viable military option, Caracas knows that it is bracing for further acts of terrorism and sabotage on its critical infrastructure. International help in combatting such state-sponsored terrorism, as reported by Venezuelan state news agency TeleSurhas already been had, however, and so we can expect that we will see how effective this has been through the lack of much materializing in this direction.
Taken all together, the essentials for a rebounded Venezuelan economy are in place. Investor confidence and the assurances to Spanish, and therefore by extension German, banking interests operating without the US as a middle-man in Latin America, are well-founded and lead towards a bullish trend.
As a post-mortem on the US’s failed regime change operation in Venezuela, it is an excellent case study in how the international community can properly deal with and respond to the often irrational and potentially destabilizing actions of former global hegemons when in a state of decline. As far as Venezuela is concerned, it’s an excellent case study in sovereignty in the 21st century, despite a west-centric socio-economic focus on globalization.