Trump Snubbed National Security Team Over Iran Strikes: 'They Want to Push Us Into War' 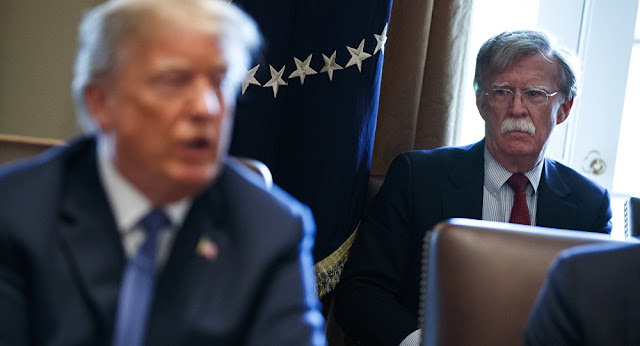 
It was earlier reported that while President Donald Trump had "agonised" over a decision whether to attack Iran over a downed US drone, his team, including Secretary of State Mike Pompeo, National Security Adviser John Bolton and CIA Director Gina Haspel, incited him to unleash fire and fury on the Islamic Republic.

President Donald Trump stood up to his national security team by deciding not to go ahead with retaliatory strikes on Iran earlier this week, The Wall Street Journal reported.

"These people want to push us into a war, and it's so disgusting. We don't need any more wars", the commander-in-chief is alleged to have told one confidant about his advisers, per the WSJ.

While lamenting the loss of a $130-million drone shot down by an Iranian missile, Trump chose not to retaliate because he reportedly thought that American voters would have been more outraged over human losses than lost funds.

The White House hasn't commented on the claims so far.
The report comes just a day after the US president told reporters that he has confidence in National Security Adviser John Bolton even though he disagreed with him on a number of issues, including his policies in the Middle East.

"I disagree very much with John Bolton. His attitude in the Middle East and Iraq - going into Iraq, I think that was a big mistake and I've been proven right but I've been against that forever. John Bolton is doing a very good job but he takes a generally tough posture. I have other people that don't take that posture, but the only one that matters is me", he said, while describing Bolton as a "hawk".
Asked about his decision not to attack Iran, Trump said, "Everyone was saying I'm a warmonger. Now they're saying I'm a dove".
Addressing the potential casualties of a strike against the Islamic Republic, the president said that "anything is a lot when they shoot down an unmanned [drone]. I didn't like it", and added that Iran was "very wise" for not hitting a manned aircraft and "we appreciate" the decision.
The New York Times earlier reported that Trump's national security team, including Bolton, Secretary of State Mike Pompeo and CIA Director Gina Haspel, had unanimously pushed for a missile strike against Iran in response to the downing of a US drone on 20 June.

Trump decided not to go ahead with the strike just 10 minutes before it was supposed to be carried out, explaining in a tweet - and later in an NBC interview - that the death of approximately 150 people was disproportionate to the loss of an unmanned aerial vehicle. Instead, he announced a new set of "major" additional sanctions against the Islamic Republic that will take effect on Monday, 24 June.

Reacting to Trump's move, Iranian Foreign Ministry spokesman Abbas Mousavi said on Saturday that the country would defend its borders "regardless of any decision" that Washington may take.

The strike on Iran was supposed to be Washington's response to the downing of a US Northrop Grumman RQ-4 Global Hawk spy drone on 20 June by the Islamic Revolutionary Guard Corps (IRGC). Tehran maintains that the UAV violated the country's airspace in the southern Hormozgan Province and was warned several times to change its course prior to being brought down.

Meanwhile, the US claims the drone was operating over international waters in the Strait of Hormuz at the time.

While slamming the incident as a dangerous provocation, Iran also said that its air defence troops had refrained from shooting down a US reconnaissance plane with 35 airmen on board that was flying not far from the drone to avoid causalties.

The episode adds to the already sour relations between the two countries that have gone into a downward spiral since the US unilaterally pulled out from the 2015 Iran nuclear deal in May 2018 and re-imposed sanctions against the country.
In light of the mounting tensions with Tehran, Washington has likewise boosted its military presence in the Middle East, deploying an aircraft carrier strike group, a bomber task force, and 1,000 additional troops to the region to send a "clear and unmistakable" message to Iran.


Tehran has strongly condemned the US military build-up and stressed that while the nation does not seekwar with Washington, it will "resist" aggressive moves.