Putin and Trump meet at the G20

‘We have lots to discuss’: Putin & Trump meet at G20 summit in Osaka

US President Donald Trump and his Russian counterpart, Vladimir Putin have gathered for long-awaited face-to face talks at the G20 Summit, as the two countries face the lowest level of trust in each other in decades.

Flanked by their diplomatic teams, Trump and Putin made brief statements to the press before shaking hands and beginning closed-door talks.

Trump said the agenda would include trade and disarmament, expressing confidence that “a lot of very positive things are going to come out of the relationship” with Russia.

“We have lots to discuss,” Trump added.

Putin noted that while the two leaders hadn’t spoken face-to-face since the Helsinki summit last summer, US and Russian officials have been consulting with one another over the past year. The meeting in Osaka, Putin remarked, will allow the two leaders to “follow up” on discussions that have been taking place over the past 12 months.

Their comments were followed by a barrage of questions from journalists, with one reporter asking Trump if he would press Putin on alleged Russian meddling in US elections.

“Yes, of course I will,” President Trump responded. He then pointed at the Russian leader and said: “Don’t meddle in the election.” Putin smiled back.
While the Mueller report found no evidence that Trump “colluded” with the Kremlin, his meeting with Putin has predictably caused mass pandemonium among diehard Russiagaters.

The gathering raised further suspicion among Trump’s most vocal critics after the president told a reporter that he would have a “good conversation” with Putin, but what they will discuss is “none of her business.” 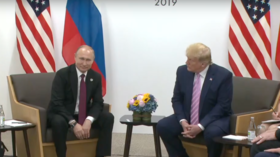 The gathering raised further suspicion among Trump’s most vocal critics after the president told a reporter that he would have a “good conversation” with Putin, but what they will discuss is “none of her business.”

In an interview with the Financial Times before the meeting, Putin said he remained cautiously optimistic about the bilateral talks, while acknowledging that US-Russia relations have become “more dramatic and explosive.”