From the former Assistant Secretary of the Treasury, Paul Craig Roberts

Since June 2009 Americans have lived in the false reality of a recovered economy.  Various fake news and manipulated statistics have been used to create this false impression.

However, indicators that really count have not supported the false picture and were ignored.
For example, it is normal in a recovering or expanding economy for the labor force participation rate to rise as people enter the work force to take advantage of the job opportunities.  During the decade of the long recovery, from June 2009 through May 2019, the labor force participation rate consistently fell from 65.7 to 62.8 percent. 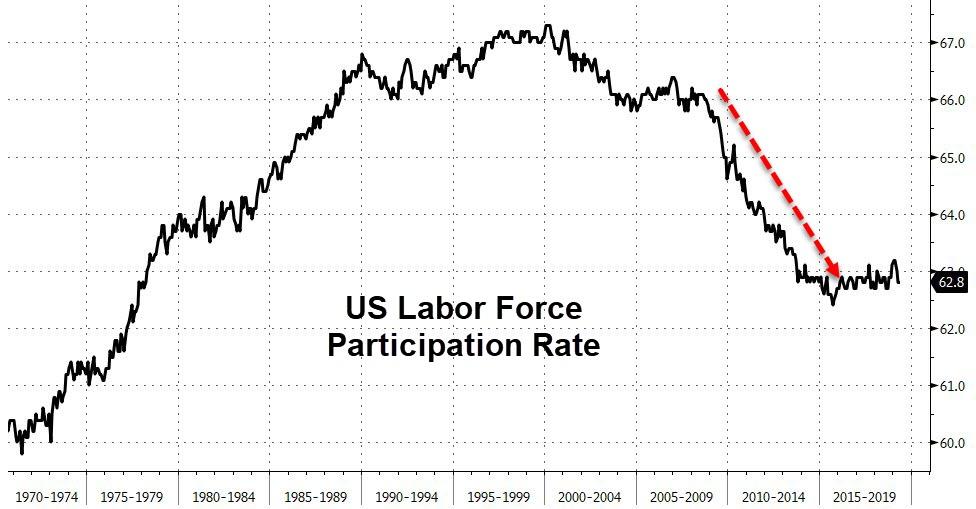 Another characteristic of a long expansion is high and rising business investment. However, American corporations have used their profits not for expansion, but to reduce their market capitalization by buying back their stock.  Moreover, many have gone further and borrowed money in order to repurchase their shares, thus indebting their companies as they reduced their capitalization!  That boards, executives, and shareholders chose to loot their own companies indicates that the executives and owners do not perceive an economy that warrants new investment.
How is the alleged 10-year boom reconcilled with an economy in which corporations see no investment opportunities?
Over the course of the alleged recovery, real retail sales growth has declined, standing today at 1.3%.

This figure is an overstatement, because the measurement of inflation has been revised in ways that understate inflation. As an example, the consumer price index, which formerly measured the cost of a constant standard of living, now measures the cost of a  variable standard of living.  If the cost of an item in the index rises, the item is replaced by a lower cost alternative, thus reducing the measured rate of inflation. Other price increases are redefined as quality improvements, and their impact on inflation is neutralized. 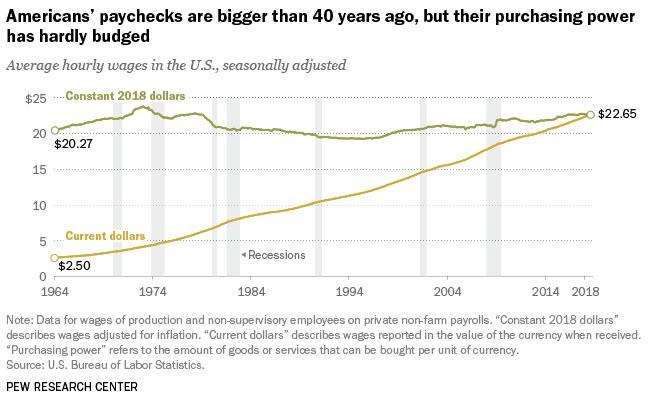 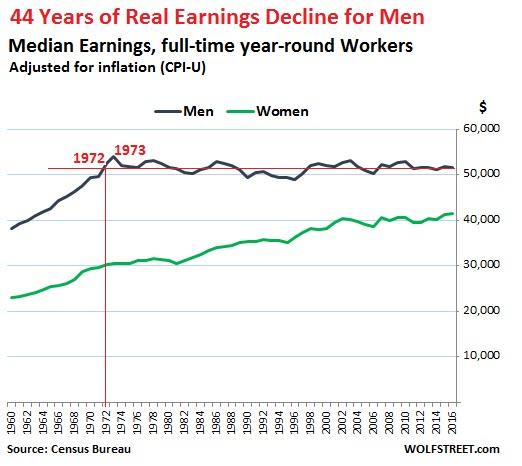 Economic shills explain away the facts.  For example, they argue that people are working more hours, so their real earnings are up although their real wages are not.

Others argue that the declining labor force participation rate reflects baby boomer retirements.  Of course, if you look around in Home Depot and Walmart, you will see many retirees working to supplement their Social Security pensions that have been denied cost of living adjustments by the undermeasurement of inflation.

Other economic shills say that the low unemployment rate means there is a labor shortage and that everyone who wants a job has one.  They don’t tell you that  unemployment has been defined so as to exclude millions of discouraged workers who could not find jobs and gave up looking.

If you have not looked for a job in the past 4 weeks, you are no longer considered to be in the work force.  Thus, your unemployment does not count.

It is expensive to look for employment.  Scarce money has to be spent on appearance and transportation, and after awhile the money runs out.  It is emotionally expensive as well.  Constant rejections hardly build confidence or hope.  People turn to cash odd jobs in order to survive.  It turns out that many of the homeless have jobs, but do not earn enough to cover rent.  Therefore, they live on the streets.

The propagandistic 3.5% unemployment rate (U3) does not include any of the millions of discouraged workers who cannot find jobs.  The government does have a seldom reported U6 measure of unemployment that includes short-term discouraged workers.  As of last month this rate stood at 7.1%, more than double the 3.5% rate. John Williams of shadowstats.com continues to estimate the long-term discouraged workers, as the government formerly did.  He finds the actual US rate of unemployment to be 21%.
The 21% rate makes sense in light of Census Bureau reports that one-third of Americans age 18-34 live at home with parents because they can’t earn enough to support an independent existence 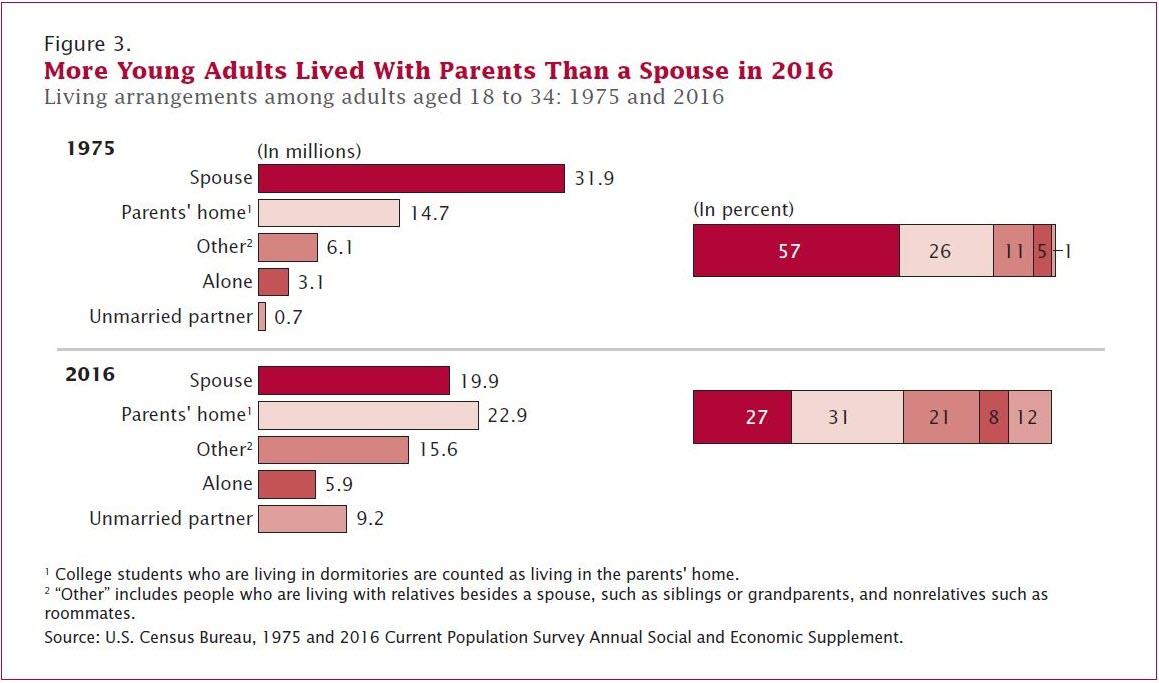 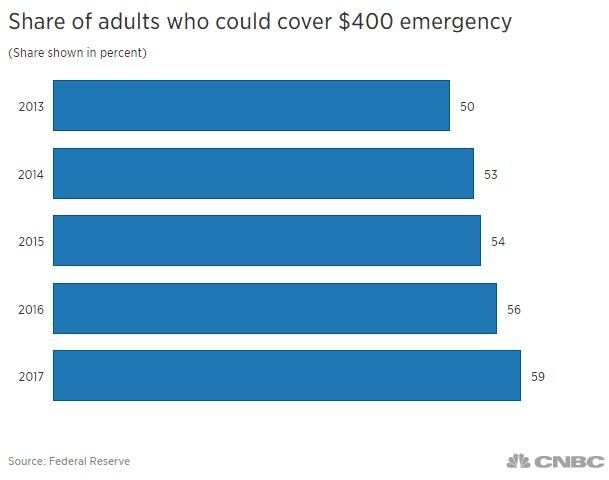 The US economy was put into decline by short-sighted capitalist greed.  When the Soviet Union collapsed in the last decade of the 20th century, India and China opened their economies to the Western countries.  Corporations saw in the low cost of Chinese and Indian labor opportunities to increase their profits and share prices by producing offshore the goods and services for their domestic markets.  Those hesitant to desert their home towns and work forces were pushed offshore by Wall Street’s threats to finance takeovers unless they increased their profits.

The shift of millions of high productivity, high value-added American jobs to Asia wrecked the careers and prospects of millions of Americans and severely impacted state and local budgets and pension funds.

The “trade war” with China is an orchestration to cover up the fact that America’s economic problems are the result of its own corporations and Wall Street moving American jobs offshore and because the US government did nothing to stop the deconstruction of the economy.

Normally a government would be protective of jobs as the government wants to take in tax revenues rather than to pay out unemployment and social welfare benefits.  Politicians want economic success, not economic failure.  But greed overcame judgment, and the economy’s prospects were sacrificed to short-term corporate and Wall Street greed.

The profits from jobs offshoring are short-term, because jobs offshoring is based on the fallacy of composition—the assumption that what is true for a part is true for the whole.  An individual corporation, indeed a number of corporations, can benefit by abandoning its domestic work force and producing abroad for its domestic market. But when many firms do the same, the impact on domestic consumer income is severe. As Walmart jobs don’t pay manufacturing wages, aggregate consumer demand takes a hit from declining incomes, and there is less demand for the offshoring firms’ products. Economic growth falters.  When this happened, the solution of Alan Greenspan, the Federal Reserve Chairman at the time, was to substitute an expansion of consumer debt for the missing growth in consumer income.

The problem with his solution is that the growth of consumer debt is limited by consumer income.  When the debt can’t be serviced, it can’t grow. Moreover, debt service drains income into interest and fee charges, further reducing consumer purchasing power.

Thus, the offshoring of jobs has limited the expansion of aggregate consumer demand.  As corporations are buying back their stock instead of investing, there is nothing to drive the economy.  The economic growth figures we have been seeing are illusions produced by the understatement of inflation.
Much of America’s post-World War II prosperity and most of its power are due to the US dollar’s role as world reserve currency.

This role guarantees a worldwide demand for dollars, and this demand for dollars means that the world finances US budget and trade deficits by purchasing US debt.  The world gives us goods and services in exchange for our paper money.  In other words, being the reserve currency allows a country to pay its bills by printing money.

A person would think that a government would be protective of such an advantage and not encourage foreigners to abandon dollars.  But the US government, reckless in its arrogance, hubris, and utter ignorance, has done all in its power to cause flight from the dollar.

The US government uses the dollar-based financial system to coerce other countries to accommodate American interests at their expense.  Sanctions on other countries, threats of sanctions, asset freezes and confiscations, and so forth have driven large chunks of the world—Russia, China, India, Iran—into non-dollar transactions that reduce the demand for dollars. Threats against Europeans for purchasing Russian energy and Chinese technology products are alienating elements of Washington’s European empire.

A country with the massive indebtedness of the US government would quickly be reduced to Third World status if the value of the dollar collapsed from lack of demand.


There are many countries in the world that have bad leadership, but US leadership is the worst of all.  Never very good, US leadership went into precipitous and continuous decline with the advent of the Clintons, continuing through Bush, Obama, and Trump.  American credibility is at a low point. Fools like John Bolton and Pompeo think they can restore credibility by blowing up countries.  Unless the dangerous fools are fired, we will all have to experience how wrong they are.

Formerly the Federal Reserve conducted monetary policy with the purpose of minimizing inflation and unemployment, but today and for the past decade the Federal Reserve conducts monetary policy for the purpose of protecting the balance sheets of the banks that are “too big to fail” and other favored financial institutions.  Therefore, it is problematic to expect the same results.
Such things as these were not done when I was in the Treasury.  This type of intervention originated in the plunge protection team created by the Bush people in the last year of the Reagan administration.  Once the Fed learned how to use these instruments, it has done so more aggressively.

Market watchers who go by past trends overlook that today market manipulation by central authorities plays a larger role than in the past.

They mistakenly expect trends established by market forces to hold in a manipulated economic environment.