The heatwave in Europe 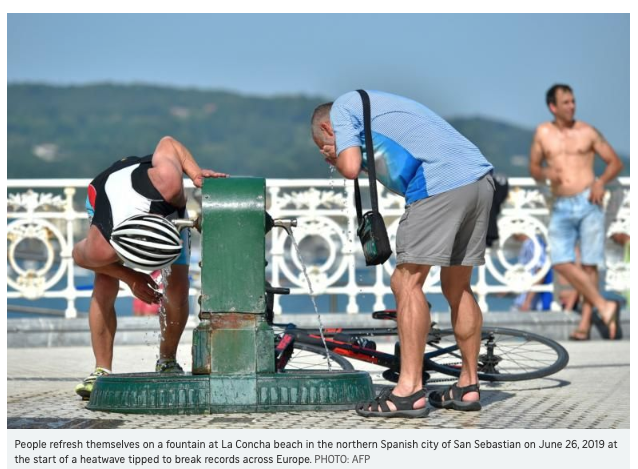 WASHINGTON/BERLIN (WASHINGTON POST, AFP) - A ferocious heatwave has overtaken parts of Europe. It has already set a number of records, and there are several days of extreme heat to go.

As the heatwave escalates towards its peak late this week, temperatures have already neared or surpassed 37.8 deg C in parts of France, Germany, Poland and Spain. Even Switzerland has locations which have risen past the 30 deg C mark.

The authorities raised alerts on Wednesday (June 26) as the heatwave threatened to intensify, with temperatures heading into the 40s deg C.

While records will continue to be broken in the days ahead, a number of historic marks have already been set as the heatwave cranks up.

France's meteorological agency, Meteo-France, tweeted that the country posted its hottest June day on record on Wednesday, with an average high temperature of 34.9 deg C.

In Germany, a weather station in Brandenburg soared to 38.6 deg C on Wednesday afternoon, becoming the hottest temperature recorded in the country in June.

A blaze 90km south-west of Berlin, which started on Monday and ravaged around 100 hectares, was finally brought under control on Wednesday.

In Munich, security guards ordered a group of women sunbathing topless on the banks of the river Isar to cover up.

The move backfired, according to the Munich daily Sueddeutsche Zeitung, which quoted another sunbather as saying that she and others took their tops off “out of solidarity”. It said an urgent motion was introduced in a city council meeting on Wednesday to allow topless bathing.

In Brandenburg, police cautioned a naked man for driving his moped wearing only his helmet and sandals.

Meanwhile, Poland set its June temperature record, with a high of 38.2 deg C in Radzyn, in the eastern part of the country. The Czech Republic also appears to have set a June record with a temperature of 38.9 deg C in Doksany, north-west of Prague.

Its not just daytime temperatures which have been exceptionally warm. Temperatures at night have also been record-setting, presenting a dangerous situation for those without access to air-conditioning and vulnerable groups such as older adults and the very young.

The low temperature in Nice, France was just 26 deg C on Wednesday, the warmest ever recorded in June.

Those toasty lows act as a big launching point for daytime highs.

Several other countries could also challenge longstanding heat records in the days ahead.

From Spain to Poland, temperatures are forecast to be at least 11 to 17 deg C above normal. Actual temperatures should surge to at least 35 to 40 deg C over a sprawling area.

The mercury is forecast to approach 40.6 deg C in Madrid on Friday, which would be its highest temperature ever recorded.

A main cause for the massive early season heatwave is a pair of powerful high-pressure systems. One is near Greenland and the other is over north-central Europe. As they become linked and flex over coming days, forming a massive heat dome, they will also act to block a low-pressure system to their south, which would draw cooler air over Europe.

"Europe is currently under historically strong upper ridge," Mika Rantanen, a meteorologist in Finland, tweeted on Wednesday. An upper ridge is the technical term for this extensive zone of high pressure or heat dome.

The upper level ridge is a double-edged sword. It suppresses cloud cover allowing the sun to bake the land surface and its circulation can draw even more heat into affected areas.

In this instance, the main heat feed is known as the "Spanish plume", sometimes also referred to as the "Sahara plume". The hot air plume, sourced from deserts in Spain and the Sahara, is surging through much of Europe. The result is excessive heat and severe thunderstorms at times in some places.

The broader weather pattern behind this heatwave has connections to the stagnant high-pressure zone responsible for the big Greenland melt event in mid-June that has been breaking records for longevity. Such patterns may be becoming more common in a warming world.

Although this heatwave is set to peak on Thursday and Friday, it will likely stay hot through the weekend in much of western and central Europe. Any notably cooler air is holding off until next week and may primarily target eastern Europe as the general hot pattern holds in place.