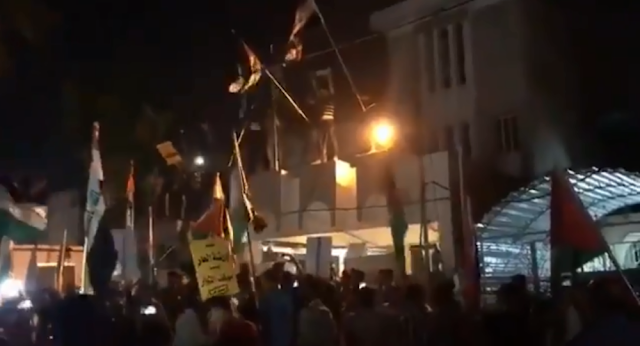 According to Iraqi security officials, the Bahraini embassy in Baghdad was stormed Thursday by protesters who disapprove of Bahrain's hosting of a US-led peace conference aimed at securing an end to the Israeli-Palestinian conflict.
Images on social media show protesters in and around the Gulf island nation's diplomatic compound in Baghdad Thursday evening, carrying Palestinian flags and burning US and Israeli flags. They were reportedly particularly angry at the Bahraini foreign minister's interview with an Israeli television station about the conference. 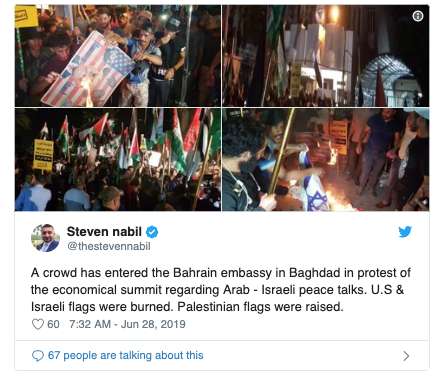 Video filmed on a cellphone outside the embassy showed protesters waving large Palestinian flags atop the structure. 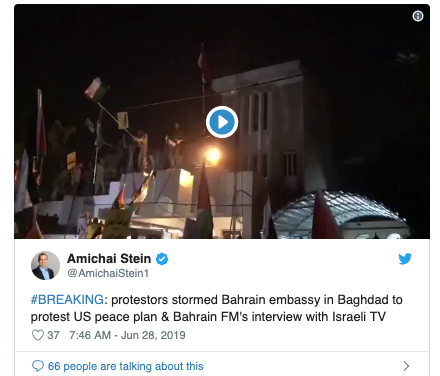 Local media reports indicate that Iraqi security forces have detained roughly 45 protesters as they were attempting to disperse the demonstration. According to the Al-Arabiya broadcaster, five security officers were injured during the incident. Iraqi Foreign Minister Mohamed Ali Hakim is said to have arrived at the scene of the protest.
Citing a statement, Reuters has reported that Bahrain has recalled its ambassador to Iraq for consultations as a result of the late Thursday demonstration. "The Ministry of Foreign Affairs of the Kingdom of Bahrain condemns the attack on the Embassy of the Kingdom of Bahrain to the Republic of Iraq by the demonstrators (which) led to sabotage in the embassy building," the statement adds.
The three-day "Peace to Prosperity" conference, hosted in Manama by US President Donald Trump's son-in-law and adviser, Jared Kushner, aimed to secure what Trump dubbed the "Deal of the Century," a sweeping solution to myriad regional conflicts centered on Israel and Palestine. The deal includes $50 billion in economic aid over the next decade, including extensive infrastructure investment. However, while the deal was hailed by Israeli politicians, a widespread boycott among Arab nations, including the Palestinians, gave voice to those opposing what one former Palestinian diplomat told Sputnik was a "very disingenuous" deal.
"The reason why Israel, the Israeli government, and unfortunately many US administrations keep pushing those so-called ‘peace processes’ that are all economic projects and no real political resolutions, it comes from this perspective that they know that what is required is a political settlement that requires political compromise," Nizar Farsakh, a former member of the Palestinian negotiation team, told Sputnik on Monday.
The crux of the matter was expressed by an op-ed in the New York Times published on June 24 and penned by Danny Danon, Israel's ambassador to the United Nations. In it, the diplomat said that "national suicide of the Palestinians’ current political and cultural ethos is precisely what is needed for peace."
Posted by seemorerocks at 19:41