'Iran was entitled to participate in the Council's meeting today,' 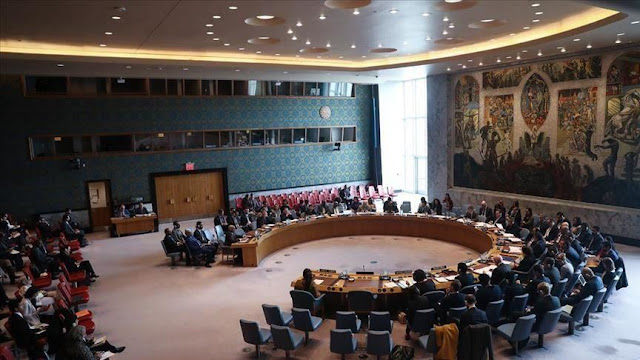 
Iran has been blocked from participating in a UN Security Council briefing regarding its downing of an American drone, its UN envoy said Monday.
"As a country whose airspace has been violated by two U.S. spy drones Iran was entitled to participate in the Council's meeting today," Majid Takht-Ravanchi told reporters as the meeting was underway. "Unfortunately we were denied of exercising this right."
The U.S. and Iran dispute the location of an American drone when it was shot down by an Iranian surface-to-air missile last week. Tehran insists the aircraft violated its airspace when it was targeted while Washington maintains it was over international waters.
The U.S. was set to provide the council with evidence it says corroborates its version of the events during Monday's briefing.
"Today the council is being briefed unilaterally by one party -- the U.S. -- who is abusing its position as the council's permanent member to misguide this body in order to advance its anti-Iran policy," Takht-Ravanchi said, maintaining Iran has "irrefutable" information to substantiate its position.
He said the drone that was shot down last Thursday was fired upon after "several" audio warnings, and was the second aircraft to violate Iranian airspace last Thursday. The first, Takht-Ravanchi said, was a manned surveillance plane with nearly three dozen Americans onboard.
"Iranian armed forces exercised maximum restraint and no action was taken against the invading aircraft," he said.
Tensions have been rising between the U.S. and Iran since May 2018, when Washington unilaterally withdrew from a landmark 2015 nuclear deal between Tehran and the five permanent members of the UN Security Council plus Germany and the EU.
The U.S. has since embarked upon a diplomatic and economic campaign to put pressure on Iran in order to renegotiate the agreement, as well as other Iranian activities Washington considers to be destabilizing.
As part of its campaign, the U.S. has reimposed sanctions on exports of Iranian crude oil, which have nosedived the Iranian economy.
Trump said Friday the U.S. was "cocked & loaded" to strike three Iranian sites in retaliation for Iran's downing of the U.S. drone, but he said he called off the attacks over concern they would have been a disproportionate response.
Roughly 150 Iranians would have been killed in the attacks, Trump said.
Posted by seemorerocks at 19:27