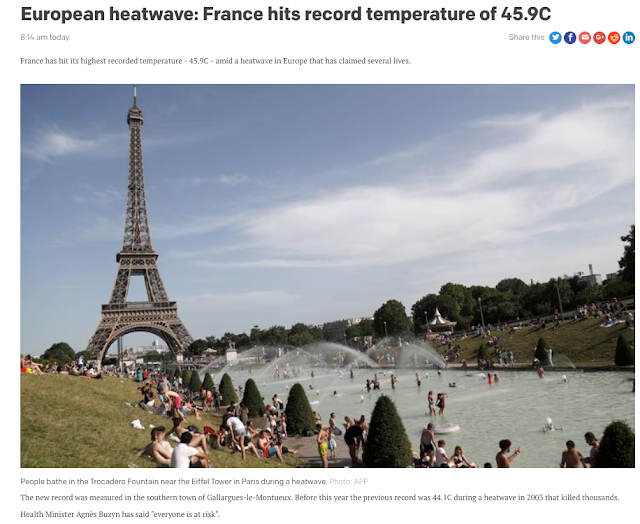 Can it be that the climate change denying Zero Hedge has a better sense of what's important? I say YES.

Update (1240ET): Temperatures were even hotter than expected across Europe today and, as Accuweather reports, the extreme heat wave is suspected of killing several people as it set an all-time high in France.

The highest temperature ever measured across France in the entirety of record keeping was set on Friday afternoon. Temperatures soared to 45.8 C (114.4 F) at Gallargues-le-Montueux in southeastern France, exceeding the nation's previous all-time record high of 44.1 C (111.4 F) at Conqueyrac on Aug. 12, 2003.


In neighboUring Spain, the heat has been blamed on the deaths of several elderly people as hundreds of firefighters are battling a major wildfire near Tarragona in northeastern Spain. About 10,000 acres of forest and vegetation are being threatened by the blaze, which has been described by regional government officials as one of the worst in 20 years. More than 50 people have been evacuated. 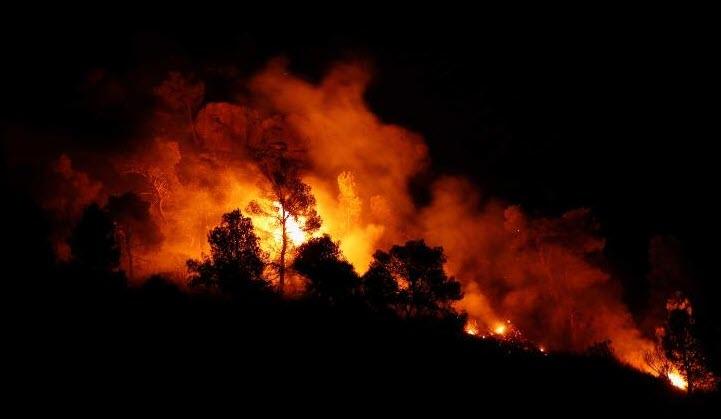 CNN reports that the fire may have been started by an "improperly managed" pile of manure that self-combusted, similar to the threat that wet hay bales pose. 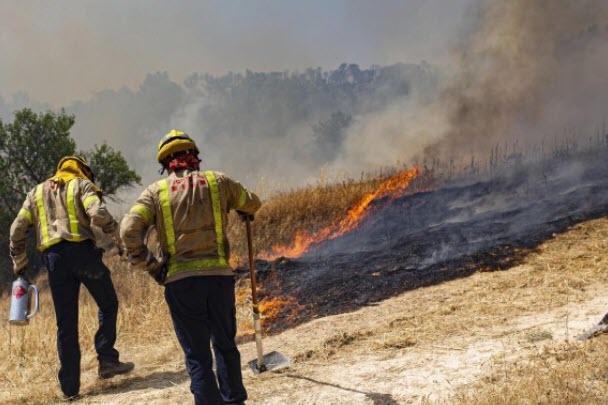 Sadly, Europeans will have to wait until Monday for the start of any relief... 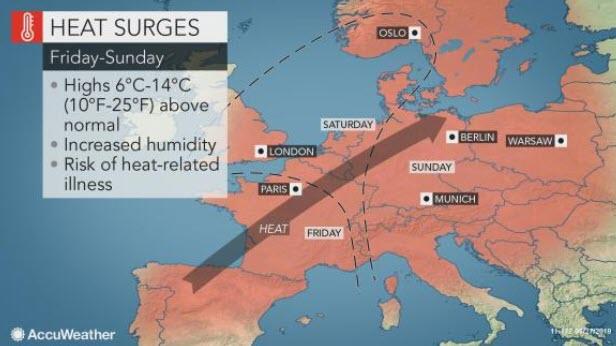 *  *  *
Record-breaking heat scorches central Europe as many braced Thursday for temperatures above 100 F.
Wednesday was one of the most sizzling days on record across Europe with average June temperatures and all-time temperature records broken, reported AccuWeather. 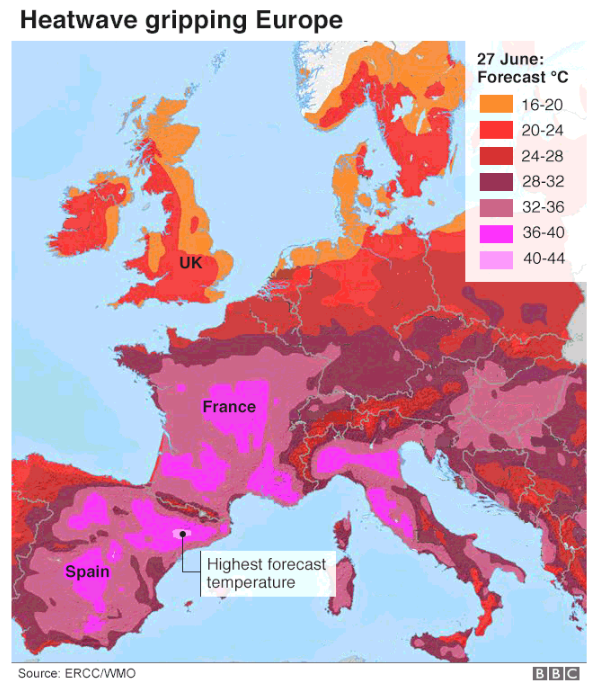 Germany, Poland, and the Czech Republic recorded its highest temperatures ever during June.

Temperatures were 100.8 F at Radzyń, Poland, on Wednesday, while Coschen station (Berlin-Brandenburg) printed 101.5 F in Germany. However, temperatures in Germany didn't surpass the 104.5 F all-time high, set in Kitzingen on August 2015. 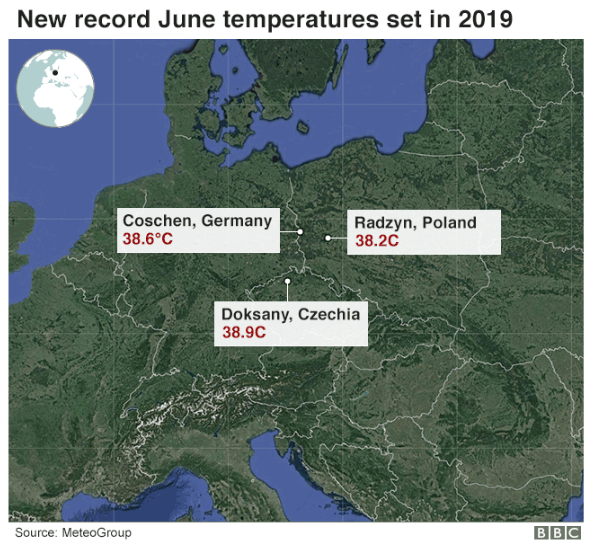 Czech Republic, Doksany recorded 102 F, hitting an all-time high for the country that was previously set at 100.8 F at Brno-Žabovřesky in June 2000.

Governments across the European Union warned citizens earlier this week about how the heat wave could cause harmful air, increase health-related illnesses at hospitals, and overload power grids.

The heat wave blasted central Europe on Thursday and will produce 104 F temperatures in France, Spain, and Greece on Friday. 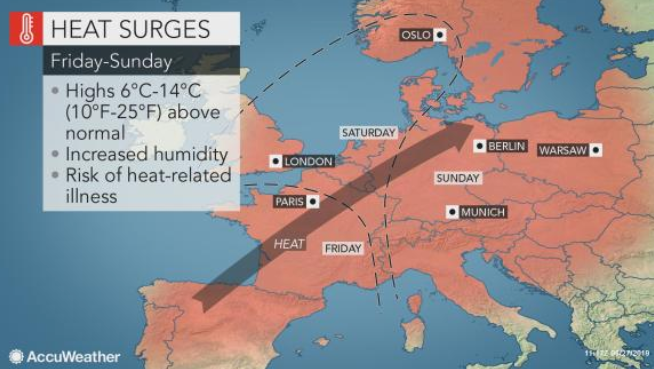 French Health Minister Agnes Buzyn told people to prepare for intense heat and expressed some irritation that some aren't taking government advice of staying indoors during the heat wave.

"We see citizens who are quite irresponsible and continue to go jogging between midday and 2:00 pm," she told France 2 TV.

Grospierres, France, located in the southern region of the country, hit 107.6 F on Thursday, which was a record-breaking high. 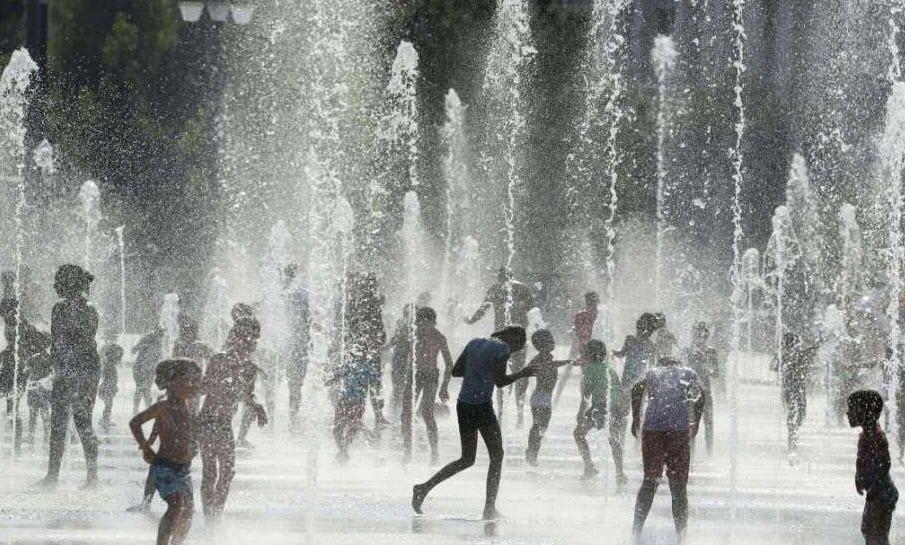 About two hours south of Grospierres, located on the Mediterranean coast, is Narbonne, which recorded highs near 106.7 F. 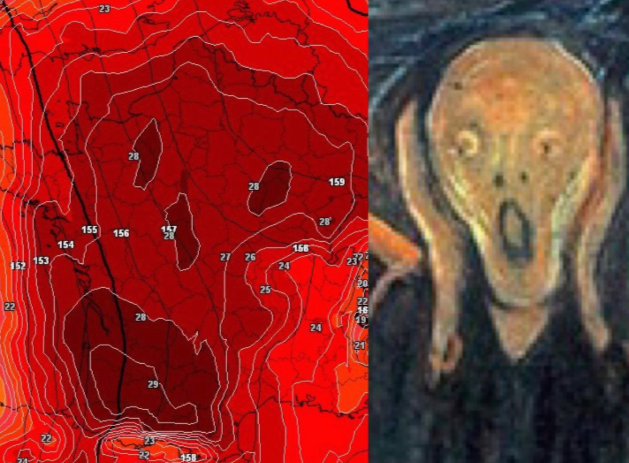 Friday could be absolute hell for France, as temperatures are expected to approach 110 F across the southeast interior of the country. 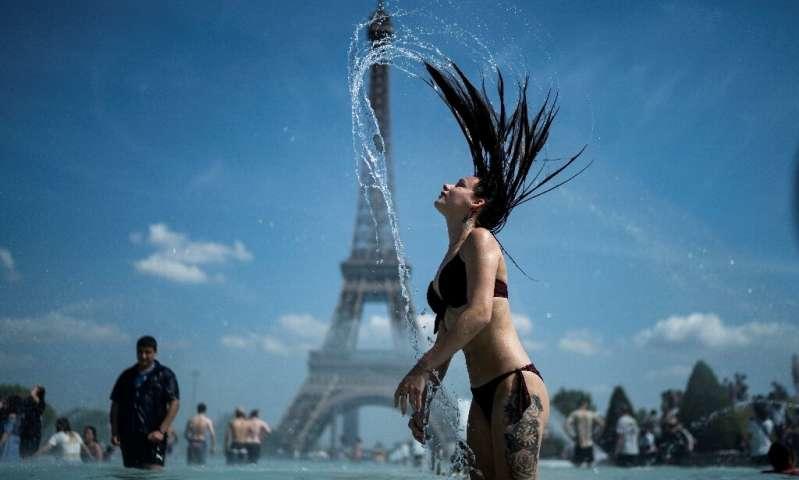 Final exams for students in France were delayed a week because of the heat wave, while French President Emmanuel Macron promised,“The whole government is mobilized.”

In France, several elderly swimmers died, apparently of “thermal shock,” after entering the cool seawater after broiling on land. 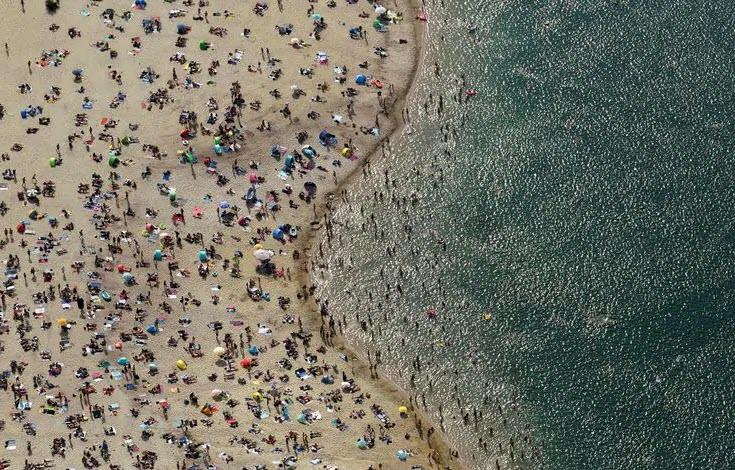 In 2003, caught unprepared by a brutal heat wave, an estimated 20,000 people died in Europe, most of them in France.

Heat waves are frequent in Europe; it was just that this one was very early in the season.
As WaPo reports, newspapers in Germany published guides on whether the heat meant that employees could simply skip work (Answer: No) and if wearing shorts at work was acceptable amid the heat wave (Answer: It depends).

In Switzerland, the heat wave also coincided with the first weeks of basic training for the country’s new military conscripts.

To prevent the recruits from overheating, Swiss officials require them to regularly fill in forms to document their hourly water consumption, an official told Swiss media.

In Germany, heated rows broke out over how much nudity to tolerate in the midst of the heat wave. After a group of women took off their bikini tops in Munich last weekend to bathe along the banks of the city’s Isar River, five security guards ordered them to put their tops back on, citing local public nudity prohibitions.

In response, about two dozen women also took their tops off “out of solidarity,”

according to the German daily Süddeutsche Zeitung. The security guards proceeded to call the police, who insisted the women cover their breasts. 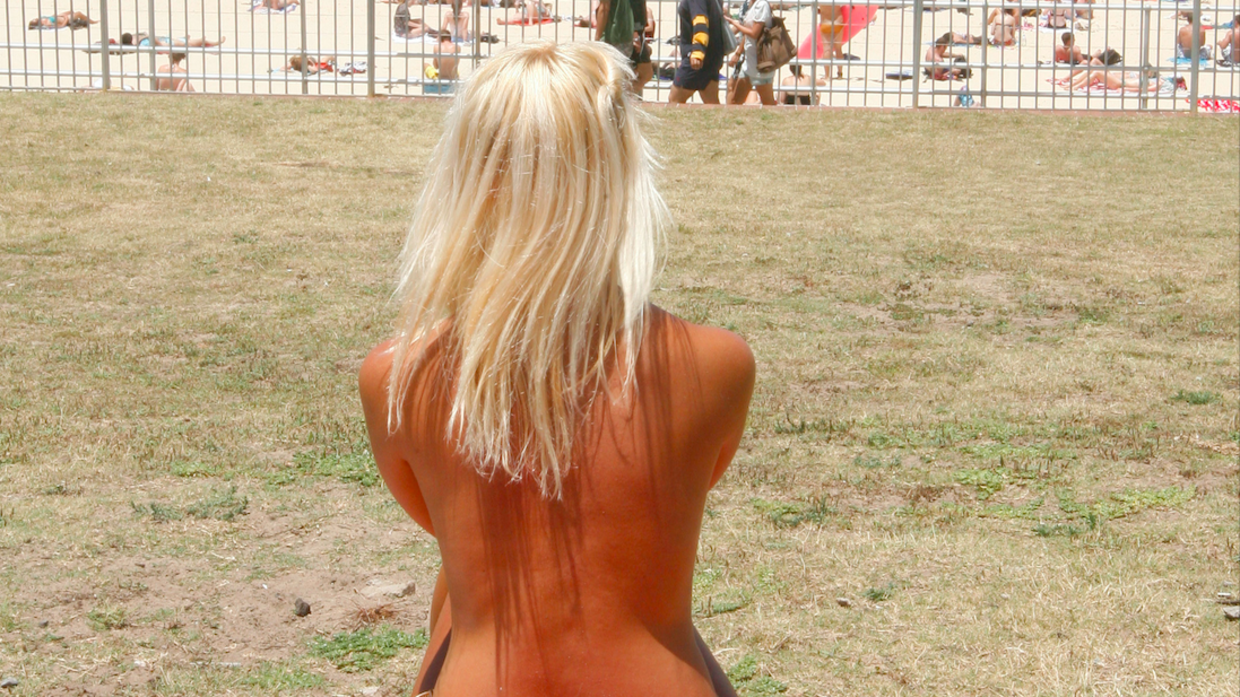 It wasn't just the ladies. In eastern Germany, officers pulled over a naked man on a moped; apparently, it was so hot outside so he had to take off his clothes and jump on his moped to catch a breeze 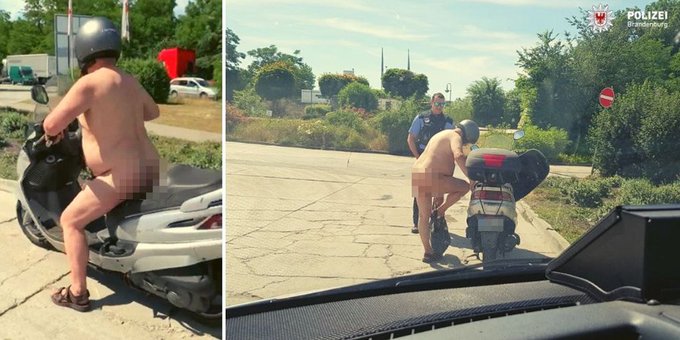 5,646 people are talking about this
Twitter Ads info and privacy
Additionally, law enforcement in Germany have decreased speed limits on several parts of the Autobahn due to fears the hot weather could cause roadways to warp as vehicles pass over.. 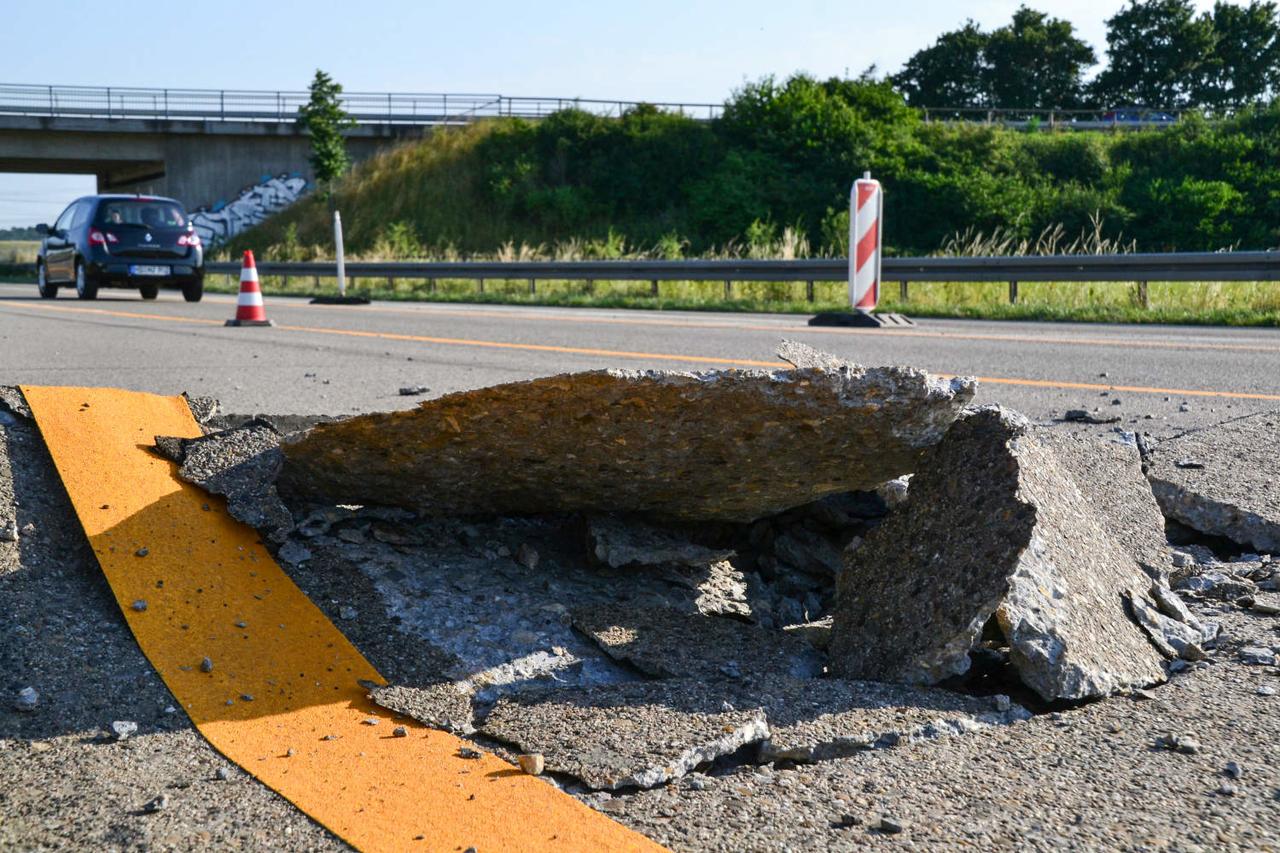 Amid the heat, the worst wildfires in two decades broke out across Catalonia, Spain. 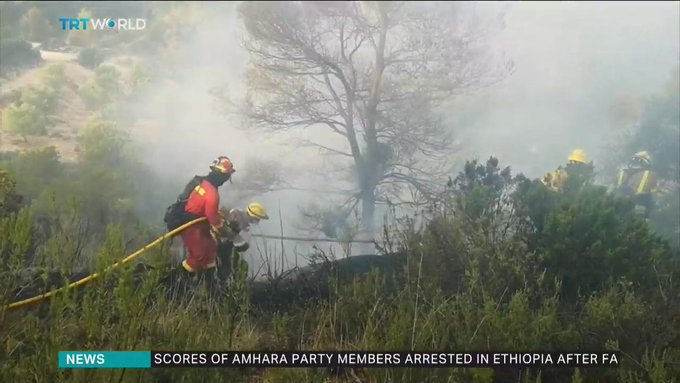 Hundreds of firefighters in Spain's Catalonia are battling the biggest wildfire in the last two decades, as Europe suffers scorching temperatures https://www.trtworld.com/article/27844


"This increase in heat extremes is just as predicted by climate science as a consequence of global warming caused by the increasing greenhouse gases from burning coal, oil, and gas," Stefan Rahmstorf, a climatologist at the Potsdam Institute for Climate Impact Research, said.

Numerous studies have shown that extreme heat waves could be connected to human-caused global warming - while none of that has been officially confirmed - we certainly must say that weather across the world has become more volatile than the past.

Meanwhile I had to chuckle. RUPTLY set up a camera and reported people bathing in a river for a couple of hours. Like watching paint dry?

It does allow climate change deniers a chance to vent their prejudices.