The Indian government warned about weathe rmodiifcation with HAARP

A report from 3 years ago

I am aware of how most people use geoenginering to ds
distract from the reality of abrupt climate change.

One, after 30 years I KNOW to be the case; the other I have come to SUSPECT is the case.

However people construe things I will continue to report things as I see them independent of what others say.

What this article doesn't say is that the Russians are almost certain to have their own program.

This is weather modification and/or warfare - very little to do with anthropogenic climate change. 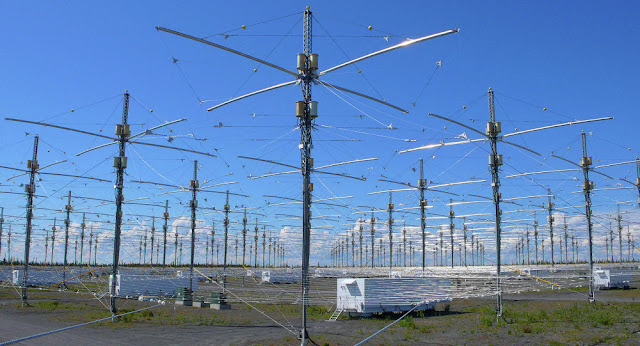 HAARP, a controversial US armed forces program, may be capable of inducing droughts, fog or disrupting communications and radar systems in enemy countries

NEW DELHI (Sputnik) — India has cautioned that the controversial High Frequency Active Auroral Research Program (HAARP) developed by the US could be causing global warming. Replying to a question raised by a parliamentarian, Anil Dave, India's Minister of Environment, Forest and Climate Change, said "the US has developed a type of weapon called HAARP. HAARP is an advanced model of a super-powerful ionospheric heater which may cause the globe to warm and have a global warming effect."

According to the website of the University of Alaska, where further research on HAARP is going on, "The US Air Force built and operated a world-class ionospheric research facility for HAARP, located in Gakona, Alaska, from 1990 until 2013. The Air Force and the university negotiated an agreement. Responsibility for the facilities and equipment formally transferred from the military to the university on Aug. 11, 2015."

Describing the functioning of the highly controversial weapons program, Dave further stated that HAARP strikes the upper atmosphere (ionosphere) with a focused and steerable electromagnetic beam. The website of University of Alaska states, "Depending on the height within the ionosphere where the effect is originally produced, these effects are no longer detectable after times ranging from less than a second to 10 minutes."

The HAARP antenna array consists of 180 antennas on a total land area of about 35 acres (14.16 hectares). The array, along with its integrated transmitters, has a total radiated power capability of about 3,600 kilowatts. The HAARP facility in Alaska is estimated to have cost more than $200 million to build.

Some have cautioned that HAARP is no less than a futuristic US war strategy program. They believe that HAARP is a weather modification weapon through which the US military can induce drought in enemy region and disrupt communications and radar systems by changing the ionosphere's properties.

Posted by seemorerocks at 18:24