Sunday is a day for catching up with 'other' news.

Investigative journalist Nicky Hager has obtained and released videos from the Operation Burnham raid in Afghanistan in 2010.
The footage was taken from an American aircraft and released to Mr Hager after a request to American authorities, through a lawyer in Washington DC.
The videos show people on the ground of Khak Khuday Dad village who appear to be carrying weapons and helicopters firing upon some individuals, leaving them dead or wounded.
In a briefing to media, Nicky Hager said there has always been a big question since the book Hit & Run came out about what was on the "secret videos". He says the videos do not show what the Defence Force has said they show.

Major revelation could change the course of Government inquiry into Operation Burnham
02:01

Insurgents may have been present during the NZ SAS raid in Afghanistan in 2010 in which civilians died. Source: 1 NEWS
While media were shown extended portions of the videos, only some have been made available for the public.
"The idea is to stop more sensational pictures of people being killed going on the internet. We want to be upfront about what's available but not get that stuff into the public realm," Mr Hagar said.
Mr Hager and fellow journalist Jon Stevenson wrote the book Hit & Run outlining Operation Burnham and New Zealand's part in it. Last week Mr Stevenson walked back a key claim of the book revealing he has since spoken to Afghan insurgents who admitted to being in the area of the second village during the raid.
The videos were amongst a trove of documents held by American authorities not publicly available until now.
The Operation Burnham raid is at the centre of a $7 million Government inquiry underway at the moment, looking to uncover the truth over the alleged killing of six civillians and the injuring of 15 others.

Advocates for the Pike River mine victims say they have crucial data from the mine's "black box" which police are only now admitting they have.

Dean Dunbar and Bernie Monk, who both lost sons in the 2010 explosion that killed 29 men, are calling for an independent inquiry after police denials that data still existed beyond the first mine explosion on November 19 that year.

The encrypted SCADA data is an electronic record of everything happening at the mine, with video footage, measurements of gas levels and electrical activity, and records of phone calls.

Two miners walked out after the first blast, but there was a second explosion five days later. Dunbar and Monk believe the data could hold crucial information about the cause of the second explosion, which effectively ended all rescue hopes.

* Pike River re-entry finally a reality after eight-year battle
* Pike River mine re-entry: A momentous day captured in pictures
* New date for Pike River mine drift reopening after failed attempt
* The promise to Pike River miners: 'We will not rest and we will never give up. We will return

In a statement on Wednesday evening, Dunbar and Monk said they first asked for the SCADA data on November 15 last year. On March 11 this year, police said it did not exist beyond November 19, 2010. 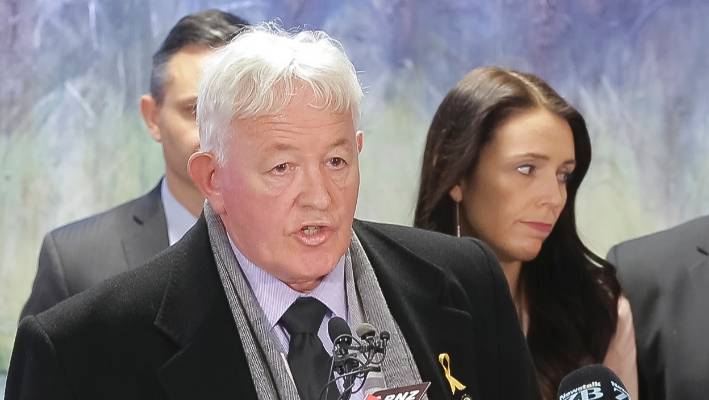 They said Pike River Recovery Agency chief executive Dave Gawn informed them the agency had the data from November 3 to 24, 2010 and that he understood police had "considerably more".

"If it wasn't for the honesty of Dave Gawn, I don't believe police would have admitted SCADA existed past the 19th," Dunbar said.

Police had since said they had three months of data up to December 2.

On Wednesday, Monk told Stuff police had then said they could not access that data because "the employee who set it up no longer works for the police".

However, when he and Dunbar informed police about 5pm on Wednesday that Newshub would be running a story an hour later on their SCADA-data findings, police then said they were now analysing the data for the period between the two explosions.

"We have got some of that data," Monk told Stuff. "We have probably got about 80 per cent of it – [we] just need a wee bit more now.

"We will find out what they have got. We have nothing to hide."

Monk hoped police were going to be "straightforward and honest" with the data, so to the two parties could compare their information.

A police spokeswoman said while the investigation was continuing "we are not in a position to discuss the data further".

"Police [have] also identified SCADA data from the time after the first explosion, outside of the scope of the investigation. This data is in the process of being extracted and examined, which is a complex and highly technical exercise that we are working our way through with care," she said.

"This data will be made available to those who have requested it once this process is complete."

"We have been seeking information from them for over two years and they have consistently delayed and denied evidence exists," Monk said.

"We have sadly come to the conclusion the only way the truth will ever be told is with the input of our experts, who we completely trust." 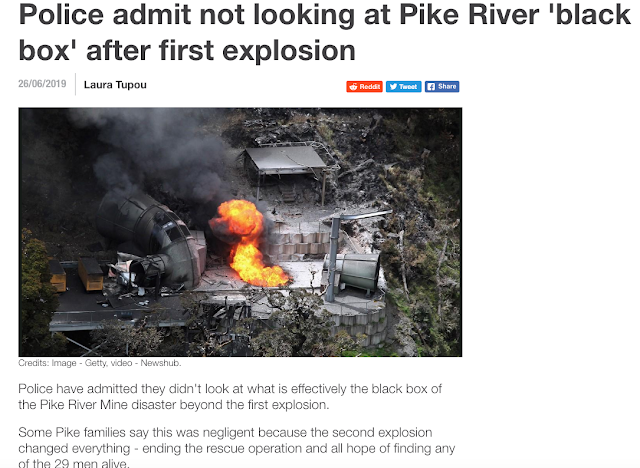 This is an excellent backgrounder of what went down at Pike River beyond the headlines - from about a year ago.
Posted by seemorerocks at 11:04