Bloomberg,
24 Novemberm, 2011
Arctic sea ice is disappearing at a rate that’s “unprecedented” in more than a millennia, according to a study that suggests the cause may be human- influenced climate change.
Trends from the last several decades suggest there may soon be an ice-free Arctic in the summer, according to a study published today in the journal Nature. Ice shrinkage is occurring at a rate that’s unmatched in duration and magnitude in 1,450 years, and greenhouse gases may be contributing to the warming, researchers said.
The ice, which melts every summer before cold weather makes it expand again, shrank this year to its second-smallest size since 1979, covering 4.33 million square kilometers (1.67 million square miles), according to the U.S. National Snow and Ice Data Center. Although previous sea ice declines have occurred at a similar pace, they don’t match the extent of the melt, the study authors said.
“This drastic and continuous decrease we’ve been seeing from the satellites does seem to be anomalous,” Christophe Kinnard, a study author and a geographer at the Centro de Estudios Avanzados en Zonas Aridas in La Serena, Chile, said in a telephone interview. “It does point to a continuation of this trend in the future.”
The researchers used ice core records, tree ring data, lake sediment and historical evidence to reconstruct the amount of Arctic cover. The thickness and extent of sea ice have declined dramatically over the last 30 years, the researchers said.
Arctic sea ice influences the global climate, since 80 percent of the sunlight that strikes it is reflected back to space. When the ice melts in the summer, it exposes the ocean surface, which absorbs about 90 percent of the light, heating the water, according to the National Snow and Ice Data Center. That influences climate patterns.
“You increase the radiation that’s absorbed by the oceans, that’s one of the strongest climate feedback mechanisms,” Kinnard said. “The more sea ice you lose, the more energy you get in the ocean, which warms the atmosphere.”


Mexico battered by worst drought in 70 years
About 450,000 cattle have died and thousands of acres of crops have been lost

MSNBC
Mexico is being battered its worst drought in seven decades, which has devastated farm life and is expected to continue into next year.
The lack of rainfall has affected almost 70 percent of the country and northern states like Coahuila, San Luis Potosi, Sonora, Tamaulipas and Zacatecas have suffered the most acute water shortage.
Due to the drought and a cold snap at the start of the year, the government has cut its forecast for corn production two times in 2011.
Crops that cover tens of thousands of acres have been lost this year and roughly 450,000 cattle have died in arid pastures. Crucial dams, typically full at this time of year, are at 30 to 40 percent of capacity.
'Very serious'
"This is very serious," Ignacio Rivera, an official at the Ministry of Agriculture and Rural Development, told Reuters. "Statistics on precipitation in the country show us that this year has been the driest in the last 70 years."
Mexico is one of the world's five top corn producers.
Rivera said some 600,000 claims have been lodged for land insured by the government against natural disaster.
The Mexican government has so far set aside some 1.6 billion pesos ($113 million) to cover the losses.
Forecasts do not signal any near-term relief, but rather more losses ahead as the winter season brings damaging frost.
"It's a troubling situation, and is more worrisome because the rainy season is over ... the hope is that by June it starts to rain," said Felipe Arreguin, deputy director of the National Water Commission.
In the northern state of Durango, where a third of the population lives in the countryside, authorities expect significant losses in grain and seed production as well as bean and corn, which are a staple in the Mexican diet.
"It's a tragedy because there is virtually no harvest. It's a critical situation that we don't even have beans for home consumption," the state governor Jorge Herrera told Reuters.
Official figures show an expected 28 percent loss in production of beans this year.
If the drought does not lift soon, analysts say authorities will be forced to raise its food imports to cover lower domestic production.
Time running out for deal at climate talks

MSNBC
Time is quickly running out to strike a deal at global climate talks to save a Kyoto Protocol in its death throes and make major cuts in the greenhouse gas emissions that scientists blame for rising temperatures, wilder weather and crop failures.
Major parties have been at loggerheads for years, warnings of climate disaster are becoming more dire and diplomats worry whether host South Africa is up to the challenge of brokering the tough discussions among nearly 200 countries that run from Nov. 28 to Dec. 9 in the coastal city of Durban.
There are glimmers of hope a deal can be reached on a fund to finance projects for developing countries hardest hit by climate change, and that advanced economies responsible for most global emissions will take it on their own to make deeper cuts at the talks known as the Conference of the Parties, or COP 17.
There is also a chance of a political deal to keep Kyoto alive with a new set of binding targets, but only the European Union, New Zealand, Australia, Norway and Switzerland are likely to sign up at best. Any accord depends on China and the United States, the world's top emitters, agreeing binding action under a wider deal by 2015, something both have resisted for years.
"Expectations are already at rock bottom regarding an international climate change architecture at the summit, and there is no reason to expect any upside," said Divya Reddy of the political risk consultancy Eurasia Group.
The Kyoto Protocol, adopted in 1997 and entered into force in 2005, commits most developed states to binding targets on greenhouse gas emissions. The talks in the South African city of Durban offer delegates their last chance to set another round of fixed targets before the first period commitment ends in 2012.
The major players are at each other's throats on extending Kyoto. The United States still has not ratified the accord, the world's biggest emitter of greenhouse gases China is unwilling to make any commitments until Washington does, and Russia, Japan and Canada say they will not sign up for a second commitment period unless the biggest emitters do too.
Emerging countries insist Kyoto must be extended and that rich nations, which have historically emitted most greenhouse gas pollution, should take on tougher targets to ensure they do their fair share in the fight against climate change.
Developing nations say carbon caps could hurt their growth and programmes to lift millions out of poverty.
On top of the acrimony, the global financial crisis, with mounting debt woes in the euro zone and the United States, makes it even more difficult to find financing and for states to take on emissions cuts that could hurt their growth prospects.
PLANET UNDER THREAT
The stakes are growing increasingly high, with many experts calling for immediate action.
This month, two separate U.N. reports said greenhouse gases have reached record levels in the atmosphere while a warming climate is expected to lead to heavier rainfall, more floods, stronger cyclones and more intense droughts.
Despite individual emissions-cut pledges from countries and the terms of the Kyoto pact, the United Nations, International Energy Agency and others say this is not enough to prevent the planet heating up beyond 2 degrees Celsius.
Global average temperatures could rise by 3-6 degrees by the end of the century if governments fail to contain greenhouse gas emissions, bringing unprecedented destruction as glaciers melt and sea levels rise, the OECD said on Thursday.
The warning from the OECD, whose main paymasters are the United States and other developed economies, underscored fears that the commitment to curb climate-heating gases could falter at a time when much of the world is deep in debt.
RINGING HOLLOW
"It is inevitable that a lot of the key players are both distracted and cautious about taking actions they would see as costly," said Jennifer Haverkamp, director of the international climate programme of the Environmental Defense Fund.
Support for the fund could ring hollow because the United Nations says it remains an empty shell awaiting new pledges from cash-strapped governments. Rich nations have committed to a goal of providing $100 billion a year in climate cash by 2020, which the Green Climate Fund will help manage. But the United States and Saudi Arabia have objected to some aspect of its design.
South Africa has said it wants to advance an African agenda at the conference but is seen by many diplomats as not having the diplomatic muscle or prestige to broker complex talks.
As the world's poorest continent, Africa is also the most vulnerable to the extreme weather conditions and rising sea levels brought by climate change. In the Horn of Africa, some 13 million people are going hungry due to prolonged drought. In Somalia, the crisis is compounded by conflict.
"Agriculture is the most threatened of all sectors. It's likely that yields in Africa will fall between 20 and 30 percent absent very large adaptation investments," said World Bank Climate envoy Andrew Steer.
Todd Stern, the U.S. envoy for climate change, said in a teleconference with journalists this week that Washington was committed to funding climate initiatives but it saw aspect of the U.N. plans as "problematic".
Stern also said despite the differences heading into Durban, deliberations and deadlines were powerful forces, which should help bring about a positive outcome.
But Ian Fry, negotiator for the tiny island state of Tuvalu that is threatened with being wiped out by rising sea levels, said he felt COP would deliver little, with major powers to blame.
"For small island states this is a total disaster and will have serious implications. They are playing Russian roulette with us with all the chambers loaded with bullets," Fry said


Region hit by electricity deficit due to drought 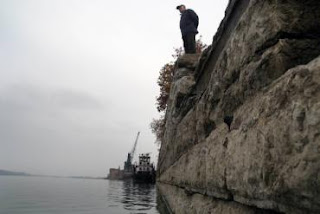 B92
SOURCE: TANJUG
BELGRADE --
Serbia and other South-East European countries have been hit by several-years' long drought that triggered a major electric power deficit.
For this reason, the region is some 3,550 MW short of electricity each hour.
Of all the countries in the region, only Bulgaria has the potential to export electricity thanks to its Kozloduy Nuclear Power Plant, while Serbia, Montenegro, Bosnia-Herzegovina, Macedonia, Croatia, Slovenia, Albania, Greece and Hungary are forced to import electricity
For article GO HERE
Posted by seemorerocks at 16:51