DIRECT MILITARY ACTION AGAINST IRAN AND SYRIA
BY BRITAIN/US/ISRAEL POSSIBLE SOON
Few who were alive then will forget when in 1979, Iranian students overran the U.S. embassy in Tehran. They took 52 Americans hostage for 444 days, coincidentally on Ronald Reagan's inauguration day in 1981. That incident ended the Presidency of Jimmy Carter and I am one of many investigators who believe that a back-door deal was arranged between Reagan and G.H.W. Bush on the one hand, and the Ayatollah Khomeini on the other, to see to it that the hostages were held in captivity until after the Presidential election.
In addition the Iranian hostage crisis led to one of the biggest tragedies in U.S. military history at a place called Desert One.
I was deeply involved with Iran then because the CIA operative who had tried to recruit me into the drug trade was an American woman raised in California with a niece of the Shah of Iran. Through her I had been introduced to Prince Shahriar, son of Shah Mohammed Reza Pahlavi. Shahriar was assassinated in Paris in 1979. The U.S. covert operatives of the era were directly connected to drug smuggling and the covert operation that ended my career. Their names may be familiar; Secord, Armitage, Abrams, North...
This is chillingly reminiscent of what happened in November 1979. The CNN story is unclear but it appears that British embassy staff were taken into custody and it is not known if they are still being held. From my position, this is absolutely connected to recent military activity in and around Syria. Iran has thrown the gauntlet and I strongly suspect that the Genie of war has left the bottle. Not a little war, a very big one.
As I have been writing for a long time, if Iran is attacked, all bets are off... everywhere. China will instantly take Iran's side, as will (most likely) Russia. Iran will most certainly turn loose all of its covert operations in Saudi Arabia. Oil prices will skyrocket. Or, as I have feared for so long, we will all become radioactive dust.
Stay close to home now. Double check your emergency supplies... and pray. -- MCR

Britain has evacuated all its diplomatic staff from Iran, Western diplomatic sources told Reuters on Wednesday, a day after protesters stormed and ransacked its embassy and a residential compound.
Reuters,
30 November,2011
Britain said it was outraged by the attacks and warned of "serious consequences." The U.N. Security Council condemned the attacks "in the strongest terms." U.S. President Barack Obama called on Iran to hold those responsible to account.
No comment was immediately available from the British government on the reported withdrawal of embassy staff from Iran.
On Tuesday, Iranian protesters stormed two British diplomatic compounds in Tehran, smashing windows, torching a car and burning the British flag in protest against new sanctions imposed by London.
The attacks occurred at a time of rising diplomatic tension between Iran and Western nations, which last week imposed fresh sanctions over Tehran's nuclear programme that they believe is aimed at achieving the capability of making an atomic bomb.
Iran, the world's fifth biggest oil exporter, says it wants nuclear plants only for the generation of electricity.
The embassy storming was also a sign of deepening political infighting within Iran's ruling hardline elites, with the conservative-led parliament attempting to force the hand of President Mahmoud Ahmadinejad and expel the British ambassador.
"Radicals in Iran and in the West are always in favour of crisis ... Such radical hardliners in Iran will use the crisis to unite people and also to blame the crisis for the fading economy," said political analyst Hasan Sedghi.
Several dozen protesters broke away from a crowd of a few hundred outside the main British embassy compound in Tehran, scaled the gates, broke the locks and went inside.
Protesters pulled down the British flag, burned it and put up the Iranian flag, Iranian news agencies and news pictures showed. Inside, the demonstrators smashed windows of office and residential quarters and set a car ablaze, news pictures showed.
One took a framed picture of Queen Elizabeth, state TV showed. Others carried the royal crest out through the embassy gate as police stood by, pictures carried by the semi-official Fars news agency showed.
All embassy personnel were accounted for, a British diplomat told Reuters in Washington, saying Britain did not believe that any sensitive materials had been seized.
Demonstrators waved flags symbolising martyrdom and held aloft portraits of Supreme Leader Ayatollah Ali Khamenei who has the final say on matters of state in Iran.
Another group of protesters broke into a second British compound at Qolhak in north Tehran, the IRNA state news agency said. Once the embassy's summer quarters, the sprawling, tree-lined compound is now used to house diplomatic staff.
An Iranian report said six British embassy staff had been briefly held by the protesters. British Foreign Secretary William Hague said the situation had been "confusing" and that he would not have called them "hostages."
"Police freed the six people working for the British embassy in Qolhak garden," Iran's Fars news agency said.
A German school next to the Qolhak compound was also damaged, the German government said. 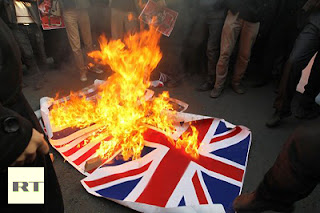 BRITAIN OUTRAGED
Police appeared to have cleared the demonstrators in front of the main embassy compound, but later clashed with protesters and fired tear gas to try to disperse them, Fars said. Protesters nevertheless entered the compound a second time, before once again leaving, it said.
British Prime Minister David Cameron chaired a meeting of the government crisis committee to discuss the attacks, which he said were "outrageous and indefensible."
"The failure of the Iranian government to defend British staff and property was a disgrace," he said in a statement.
"The Iranian government must recognise that there will be serious consequences for failing to protect our staff. We will consider what these measures should be in the coming days."
The United States, alongside the European Union and many of its member states also strongly condemned the attacks.
There have been regular protests outside the British embassy over the years since the 1979 Islamic revolution that toppled the U.S.-backed shah, but never have any been so violent.
The attacks and hostage-taking were a reminder of the 1979 takeover of the U.S. embassy in Tehran carried out by radical students who held 52 Americans hostage for 444 days. The United States cut diplomatic ties with Iran after the hostage-taking. 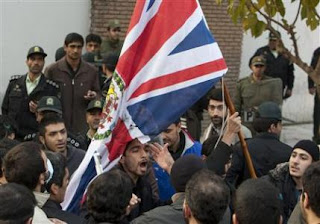 
Mark Almond, a visiting professor of international relations from Bilkent University in Turkey, believes that the attack on the UK embassy is more of a “symbolic incident” than a repetition of the hostage crisis on 1979.
“The British embassy staff seemed to be expecting this and escaped through the back door,” he said.
Almond says that the real question is whether this situation will be used to raise tensions and whether “Iran’s nuclear projects are going to be attacked by the West, by the United States and its allies, either directly with military forces, or indirectly using some kind of cyber warfare.”
Almond added that situation is dangerous because many Iranians believe “that the West is engaged in sabotage and a terrorist plot against them.”

Posted by seemorerocks at 20:29