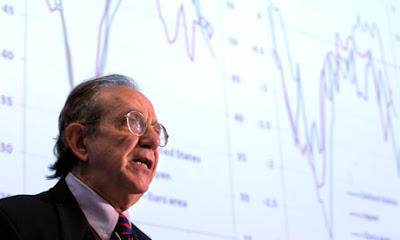 the Guardian,
Monday 28 November 2011 19.47 GMT
The collapse of the euro could send the world's advanced economies into a severe recession, dragging emerging markets with them into the mire, the Organisation for Economic Co-operation and Development warned on Monday.
The Paris-based thinktank slashed its forecast for growth among its 34 members from 2.3% half a year ago to 1.6%, with Europe dramatically downgraded from 2% to just 0.2% because of the unresolved sovereign debt crisis.
Pier Carlo Padoan, OECD chief economist, made plain in the body's latest six-monthly economic outlook that the greatest threat to global economic health comes from the eurozone rather than from the tax-and-spend gridlock in the US Congress.
In his introduction to the report he said: "Recent contagion to countries thought to have relatively solid public finances could massively escalate economic disruption if not addressed."
In a devastating critique of eurozone leaders' hesitancy and dilatoriness, he said: "The scenario so far is that Europe's leaders have been behind the curve. We believe this could be very serious."
His comments came amidst evidence that the 17 eurozone countries are even wider apart on the measures required to staunch the exit of global investors and prevent a credit crunch on an even worse scale than in 2008-09.
Padoan also made plain that the OECD's depressed economic forecasts could be downgraded even further if one or more countries default on their sovereign debt and EU leaders fail to agree on solutions to the crisis at their summit on December 8-9.
As IMF managing director Christine Lagarde insisted Italy had made no request for a reported €600bn bailout, Padoan warned that a "black swan" event in the euro area could bring "highly devastating outcomes."
In a prolonged, deepened recession, unemployment would soar and the US and Japan would see "marked declines in activity" and emerging markets would not be immune as global trade declined.
Noting that contagion is spreading from the weaker periphery of the eurozone to the once-stable core, the OECD is urging European leaders to give the main bailout fund, the EFSF, enough firepower to counter-act the sell-off in debt markets. But plans to boost this to €1tn or more appear to have collapsed.
Padoan said political leaders needed to ensure "smooth financing at reasonable interest rates for sovereigns" in order to block contagion. "This calls for rapid, credible and substantial increases in the capacity of the EFSF together with, or including, greater use of the ECB balance sheet.
"Such forceful policy action, complemented by appropriate governance reform to offset moral hazard, could result in a significant boost to growth in the euro area and the global economy."
The think tank is demanding a "substantial relaxation of monetary conditions" – code for the ECB to follow the lead of the US Fed and Bank of England by embarking on quantitative easing and substantially increasing its purchases of sovereign bonds.
The OECD also urges that Europe's banks be well-capitalised, with reports circulating that the European Banking Authority will be forced to raise substantially the estimate of €106.5bn required to meet tough new capital ratio targets.
Germany's second-largest lender, Commerzbank, alone needs €5bn and could be forced to turn again to Berlin for a bailout. Many analysts believe the debt crisis is now accompanied by a serious and growing banking crisis.
Monday's report sees OECD area unemployment remaining at 8% in both 2012 and 20913, with inflation down to 1.5% in 2013. Growth in the US rises to 2.5% in 2013 but this assumes a "muddling-through" scenario rather than the more pessimistic prospect of disorderly defaults, systemic bank failures and excessive fiscal tightening.
Posted by seemorerocks at 18:25