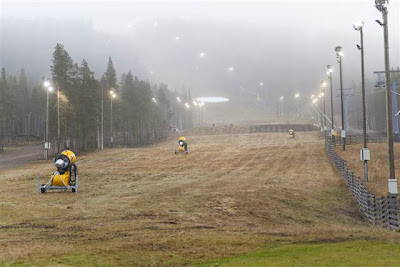 Google,
STOCKHOLM (AP) —
For some reason, Scandinavia is not its frigid self, with unusually warm weather delaying the onset of winter in northern latitudes normally decked in white.
The lack of snow has been bad news for winter sports — World Cup ski races have been dropped, or held on artificial snow, and mountain ski resorts are unable to open.
There are even reports of bird song and blooming gardens in some places typically entering the winter freeze at this time of year.
"Some flowers, like roses, have actually begun to blossom for a second time," said Mats Rosenberg, a biologist in Orebro, south-central Sweden.
Weather experts say this fall is on track to become one of the warmest on record in the northern part of Scandinavia, where the start of winter has been delayed by more than a month in certain locations.
In the Finnish town of Sodankyla, 80 miles (130 kilometers) north of the Arctic Circle, snow cover started Nov. 17, the latest date in 100 years, said Pauli Jokinen, spokesman at the Finnish Meteorological Institute.
Animals — such as stoats, hares and willow grouse — that change color with the season turned white weeks before the snows came, bringing an eerie feeling to the snowless wilds of Lapland.
"It was really very weird — ghost-like white figures darting among the yellow leaves and lichen," said Viljo Pesonen, mayor of the town of 9,000.
"They don't go by the weather conditions, time determines when they turn white. It has also made the place much darker as there has been no snow to lighten the shortening days," he said, adding that heavy rain during the day had already cleared fields of snow.


Earlier this month, World Cup Alpine skiing races were moved from Levi, Finland, to Austria because of the lack of snow.
Cross-country World Cup races in Norway last weekend had to be moved from barren ground in Beitostoelen to Sjusjoen, where at least it was cold enough for artificial snow to stick.
Ski lifts remain idle in Are, Sweden's biggest ski resort, which normally opens in the first half of November.
"But there is some snow at the very top, and so you have to throw the skis over the shoulder and make the 4-mile (6 kilometer) walk up there if you want to ski," said Benny Paulsson, a spokesman for Are's tourist office.
According to Sweden's meteorological office SMHI, the average temperature measured for November so far is 12.6 degrees Fahrenheit (7 degrees Celsius) above average.
For example, the residents of Kiruna city, northern Sweden, had do deal with temperatures of 32 degrees Fahrenheit (0 degrees Celsius) on Thursday night, much warmer than they are accustomed to.
Posted by seemorerocks at 15:59