Moody's: Every European nation now at risk on debt 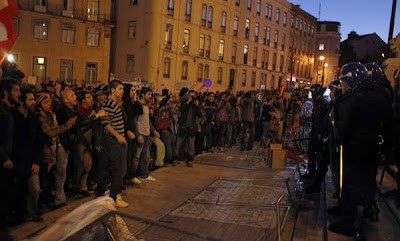 LA Times,
27 November, 2011
Throwing more logs on the Eurozone fire, Moody's Investors Service said early Monday that the continent’s debt crisis now is "threatening the credit standing of all European sovereigns."
That's a not-so-subtle warning that even Moody’s top-rung Aaa ratings of countries including Germany, France, Austria and the Netherlands could be in jeopardy.
In a report from London, Moody’s painted a despairing picture of the choices European governments face as investors have grown increasingly fearful of buying Eurozone countries’ bonds, thereby driving up market interest rates to prohibitive levels.
The firm said its “central scenario” remains that the euro area will be preserved without widespread bond defaults. But policy moves to keep the Eurozone intact “may only emerge after a series of shocks, which may lead to more countries losing access to market funding for a sustained period and requiring a support program,” Moody’s said.
“This would very likely cause those countries' ratings to be moved into speculative grade,” meaning “junk” quality, it said.
Moody’s currently has junk ratings on bonds of Greece, Ireland and Portugal, all three of which have gotten European Union bailouts in the last 18 months.
In recent weeks, worries have mushroomed that Spain and Italy also will require Eurozone help to avoid defaulting on their debts.
Though it held out hope that the debt crisis could be contained, Moody’s said there was a growing chance of dire scenarios playing out. From a summary of the report:
"The probability of multiple defaults ... by euro area countries is no longer negligible. In Moody's view, the longer the liquidity crisis continues, the more rapidly the probability of defaults will continue to rise.
"A series of defaults would also significantly increase the likelihood of one or more members not simply defaulting, but also leaving the euro area. Moody's believes that any multiple-exit scenario -- in other words, a fragmentation of the euro -- would have negative repercussions for the credit standing of all euro area and EU sovereigns".
Talk of a Eurozone breakup has become much more widespread in recent days, as Germany and the European Central Bank have continued to oppose bold new steps to provide more financial aid to struggling member countries.