Collapse news from the world

India power investment slows, chronic deficit worsens
Investments into India's power sector are slowing despite a chronic electricity shortage that threatens GDP growth, executives told the Reuters India Investment Summit, due to coal shortages, land hassles and an inability by distribution companies to raise tariffs.
Reuters,
23 November, 2011
Asia's third-largest economy, where blackouts are common, faces a peak power shortage of 13 percent as rising demand from industry, homes and shopping malls outstrips capacity growth.
The energy-hungry nation needs to add over 75,000 megawatts in the five years to March 2017 to support its target of 9 percent GDP growth, according to a government report. That will cost roughly 11 trillion rupees ($210 billion), with half the investment to come from the private sector. But investor appetite is weak.
"We are very worried about the power sector, for the simple reason that it is the catalyst for growth," R Shankar Raman, chief financial officer at engineering conglomerate Larsen & Toubro (LART.NS), said at the Summit.
"Unless we fix that, much of the other investments are not going to happen easily," he said. Larsen & Toubro last month slashed its overall order growth guidance for the current fiscal year by two-thirds to 5 percent, blaming slowing investments.
For article GO HERE
Commentary: Cold winter ahead for South Koreans
MENAFN.com
23 November, 2011
South Korea is not usually lumped with nations such as Indonesia and the Philippines when it comes to infrastructure deficiencies.
Indeed, the country prides itself on its high-quality transportation and communications systems. It is also eager to export its expertise in nuclear power.
This winter, however, South Koreans will be swallowing their pride to endure an unprecedented round of electricity rationing.
On Sept 15, a five-hour nationwide power outage left more than a thousand people trapped in lifts, stopped factory assembly lines and left major roads in gridlock as traffic lights failed.
As the country fumed, the influential Chosun Ilbo daily called for tough action. "Those who are responsible for the shameful blackouts... must be punished," it thundered in an editorial.
The first response of embarrassed officials was to search for explanations that avoided any reference to systemic failure. Since then, however, it has become clear that poor planning, delays in power plant construction and the reluctance of politicians to raise politically sensitive electricity prices were the main culprits.
As the September blackout revealed, reserve power now stands at dangerously low levels. Since it takes about four years to build a power plant from scratch, the only thing the government can do now is find ways to reduce demand. And this, in turn, could have a serious impact on economic growth.
For article GO HERE
Brazil 'risks loss of forest area equal to Germany, Italy and Austria' 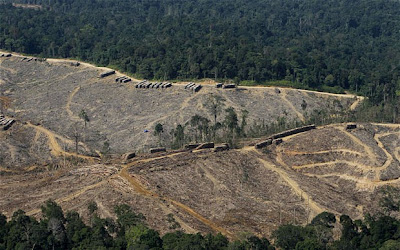 An area of forest equal to Germany, Italy and Austria combined could be lost forever if Brazil's senate approves new laws on land clearance to be voted on within days, conservationists have warned.
the Telegraph,
23 November, 2011
Deforestation in the Brazilian Amazon has declined steadily since 2004 and fell to the lowest level on record in the year from August 2009 to July 2010 following improved satellite monitoring and tougher enforcement.
But this year has already seen signs of a resurgence in several areas and environmental groups believe proposed changes to Brazil's Forest Code will exacerbate the problem in the Amazon and beyond.
They warn that the legislation would open up vast swathes of the world's biggest rainforest to uses such as cattle ranching and soy production and end hopes of replanting many illegally cleared areas.
According to WWF, Brazil's efforts to position itself as a "global environmental leader" risk being severely damaged before it hosts the UN Conference on Sustainable Development – known as Rio+20 – in Rio de Janeiro in June next year.
For article GO HERE
Arctic sea ice decline 'unprecedented' in last 1,400 years 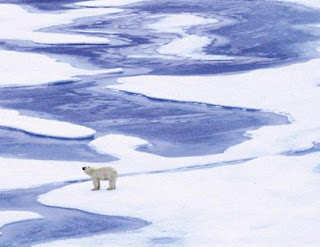 USA Today,
23 November, 2011
Arctic sea ice continues to dwindle each summer to some of the lowest levels on record, according to the National Snow and Ice Data Center, with this year's ice loss the second-lowest ever. However, the record only goes back to 1979, when satellites began tracking sea ice. This is admittedly a tiny sample set, especially when dealing with long-term climate changes that last hundreds or thousands of years.
But a new study released today in the British journal Nature finds that "both the duration and magnitude of the current decline in sea ice seem to be unprecedented for the past 1,450 years," the study authors report, also calling the declines "unparalleled" in relation to previous patterns of natural variation.
The study was led by Christophe Kinnard of the Center for Advanced Studies in Arid Zones in La Serena, Chile.
Kinnard and his colleagues used proxy data -- such as ice core records, tree ring data, lake sediments and historical evidence -- to reconstruct past sea ice cover in the Arctic. They found that unusually warm Atlantic Ocean water flowing into the Arctic is the cause of the recent sea ice decline.
Whether the observed decline in Arctic sea ice of the past few decades is due to natural variability is difficult to determine, the scientists admit. However, they conclude it is consistent with human-caused global warming
See photos of: Climate Change
Posted by seemorerocks at 19:50