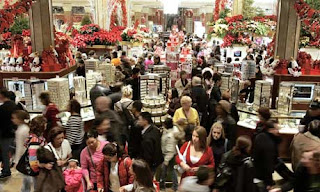 the Guardian,
25 November, 2011
Shoppers in the US kicked off their annual "Black Friday" orgy of consumerism amid scenes of pushing, pulling, running and – in one case – pepper-spraying their way through the doors of the nation's shops and malls.
The annual tradition, when many stores open early with cut-price sales on the day after Thanksgiving, has become a source of controversy amid frequent scenes of near-rioting and injuries as mobs of people crowd into big-name shops.
But few can have expected even the most determined of bargain-hunters to adopt the brutal tactics of one female shopper in a Los Angeles suburb who attacked her rivals with pepper-spray: a substance more recently associated with police brutality against Occupy Wall Street protesters.
At least 20 people, including several children, were injured as the woman deployed her weapon. "I heard screaming and I heard yelling. Moments later my throat stung. I was coughing really bad," said Matthew Lopez, a shopper who recounted his story to the Los Angeles Times.
The woman, whom witnesses said appeared to be defending an X-Box games console, has not been found or yet identified. Perhaps unsurprisingly, the gigantic store remained open amid the mayhem and other shoppers continued to roam the aisles filling their trolleys with goods.
The incident occurred late on Thanksgiving evening as the Walmart – like some other stores – had pushed back its Black Friday opening to begin late on Thursday.
The day gets its name from the idea that the period after Thanksgiving marks the part of the year when many shops finally get in the "black" and start turning a profit for the year.
But America in 2011 is stranded in a moribund economy marked by sluggish growth and a headline jobless rate stuck around 9%. Many retailers have pinned their hopes on a strong shopping season in the run up to Christmas and will be looking pouring through data from Black Friday for signs of increased spending.
Experts expect 152m people to hit the shops over the Black Friday weekend, up 27% on last year, with many retailers hoping for a desperately needed shot-in-the-arm to consumer spending in a still battered economy.
Even Apple, which has until now eschewed a discounting policy, cut its prices for one day on Friday.
Elsewhere in America the queues and rush to get through the doors was a little more steady and less violen than in Los Angeles. There were several shooting incidents, in Florida and in North Carolina, but it was far from clear these were directly linked to Black Friday shopping.
Yet, despite the problems, millions of people queued up outside stores in order to be first inside and snap up some of the bargains on offer on anything from TVs and consumer electronics to fashion and furniture. At Macy's in New York an estimated 9,000 people waited in the street for a midnight opening.
In recent years, as media coverage of the event has grown and scenes of rioting and stampedes have become more common, Black Friday has drawn its share of criticism.
However, this year, as the Occupy movement has sprung up across the country, shoppers in some parts of America have also been joined by protesters trying to persuade them to put down their bags and go home, or at least avoid large chains and shop smaller and more locally.
Some campaigners called for a boycott of stores by consumers, though judging by the mayhem and huge queues that had little impact. Elsewhere protests were held at stores. At Macy's in Manhattan a small group of people chanted "Occupy it, don't buy it" to waiting shoppers.
In places such as Seattle protesters planned to hold rallies outside Walmarts in the city. In the small city of Boise, Idaho, a local Occupy group aimed to dress up as the undead to symbolise "consumer zombies".
In Iowa "flash mobs" of protesters were set to target malls to try and convince shoppers to stay or away or think more politically about their purchases.
Posted by seemorerocks at 19:58