The World from Berlin

'The Crisis Has Hit the Entire Core of the Euro Zone'

der Spiegel,
24 November, 2011
Those who believe the economic situation in the euro zone can only improve are, it seems, sadly mistaken. On the same day that conflict between Berlin and the European Commission over so-called euro bonds flared up, an auction of German ten-year bonds failed, with investors purchasing barely half of the €6 billion offering. Could Germany, supposedly the only safe haven in the euro zone, be the next country to slide into financial trouble?
The failure of the bond auction, dubbed a "complete disaster" by Marc Ostwald, an analyst at Monument Strategies, has shaken confidence in German debt. Bond investors are effectively on strike, lending to euro-zone banks is freezing up, ever more financial institutions are dependent on the ECB for funding, and depositors are withdrawing increasing amounts of money from southern European banks.
Though there has been much consternation over Germany's government bond auction failure, few officials are starting to panic just yet. German Finance Minister Wolfgang Schäuble's spokesman said the auction did not mean the government had refinancing problems, and the financial markets seemed to agree. Some analysts said Berlin just needed to offer a more attractive yield. But it was a sign that, as the paymaster of the euro zone, Germany may face creeping pressure as the crisis continues to deepen.
In one of the most widely quoted remarks of the day, Andrew Roberts, an analyst at the Royal Bank of Scotland, even went so far as to ask if Germany now realized that it was just "a first-class passenger on the Titanic." 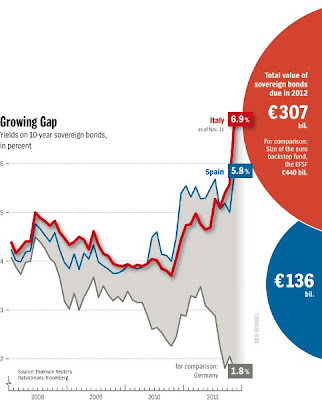