Iran erupted in a fresh frenzy of animosity towards its old imperial foe on Sunday as MPs chanting "death to England" voted to expel Britain's ambassador to Tehran and threatened his mission with a reprise of the 1979 hostage crisis. 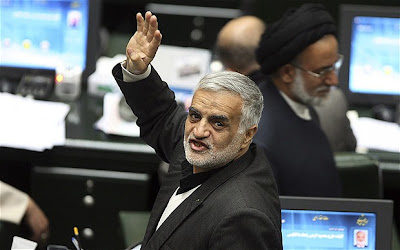 the Telegraph,
6:38PM GMT 27 Nov 2011
Dominic Chilcott, who took up the position of ambassador just a month ago, could be forced to leave the country within weeks after a motion to downgrade Iran's diplomatic ties with Britain was passed overwhelmingly by the Islamist republic's parliament.
The step was taken after Britain, Canada and the United States announced fresh sanctions against Iran last week in the wake of a report by UN weapons inspectors which provided the most compelling case yet that Tehran is trying to build a nuclear bomb.
Britain was singled out, however, after it became the first state to impose direct sanctions on Iran's central bank. Financial institutions in the City were also banned from doing business with their Iranian counterparts.
Despite pressure from Israel, Washington has baulked at following suit, arguing that such a step would cause deep financial pain for ordinary Iranians and could cause the price of oil to soar. If its central bank faced widespread international sanctions, Iran would find it virtually impossible to import and export oil, food and other commodities except on the black market.
It is the first time in the UK's postwar history that Britain has imposed a total boycott on the entire banking industry of a foreign state.
Iranian MPs were incandescent in their fury towards Britain, known by many in Iran as "the Old Fox". After announcing that the motion had been carried by 171 votes to three, Ali Larijani, the hawkish speaker, warned that even tougher penalties would be imposed on Britain, saying: "this is just the beginning of the road."
The resolution, which declared the British government to be "worse than the devil", must now be approved by Iran's Guardian Council. It is unlikely that the body's spiritual elders, whose main role is to ensure that legislation cannot be deemed un-Islamic, would block the move.
Once the council has bestowed its blessing, Mr Chilcott would be ejected from the country and Iran's ambassador to London recalled. The respective missions would be run at charge d'affaires level, as they were just a few months ago.
For many MPs, the censure was not strong enough.
"This plan should be firmer and stronger against Britain," Mahmoud Bighash, one legislator, told the house. "Having relations with Britain, even with one representative, is a total betrayal and we should padlock the British embassy."
Another of his colleagues went even further, invoking the hostage crisis of 1979 when, at the height of Iran's Islamist revolution, student gunmen raided the US embassy in Tehran and took its diplomatic staff hostage for 444 days.
"The British government should know that if they insist on their evil stances, the Iranian people will punch them in the month, exactly as happened against America's den of spies," said Mehdi Kuchakzadeh.
The Foreign Office said it was dismayed by the development.
"The Iranian parliament's vote to expel our ambassador is regrettable," a spokesman said. "If the Iranian government acts in this, we will respond robustly in consultation with our international partners."
The latest spat caps two years of worsening relations between Iran and Britain, which has been described by the Islamist state's supreme leader, Ayatollah Ali Khamenei, as the "most treacherous" of Iran's enemies.
Much of the anger has been directed at Britain for its criticism of Iran's democratic record, especially in the aftermath of its controversial elections in 2009.
Of itself, Britain's decision to sanction Iran's central bank will not be seen as of great consequence – but there is fear that other states both within and outside the EU could follow suit, a development that would prompt profound disquiet within the corridors of the regime.
Posted by seemorerocks at 15:23