Eurogeddon - the death of a currency

It is amazing that as the Euro dies and we appear to be moving towards war, NONE of this appears to be of the SLIGHTEST interest to the New Zealand media!


This is about the most I can find in our local media!

"Bank of New Zealand strategist Mike Burrowes said there are clearly much bigger things happening globally impacting on the currency, and the only way the election could lead to uncertainty for the kiwi is if there is a week or two where a coalition is formed".
Death of a currency as eurogeddon approaches
It's time to think what hitherto markets have regarded as unthinkable – that the euro really is on its last legs 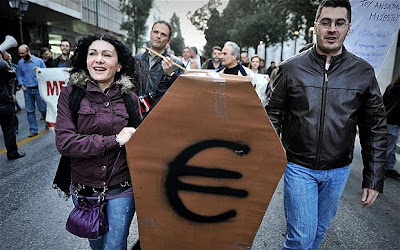 23 November, 2011
The defining moment was the fiasco over Wednesday's bund auction, reinforced on Thursday by the spectacle of German sovereign bond yields rising above those of the UK.
If you are tempted to think this another vote of confidence by international investors in the UK, don't. It's actually got virtually nothing to do with us. Nor in truth does it have much to do with the idea that Germany will eventually get saddled with liability for periphery nation debts, thereby undermining its own creditworthiness.
No, what this is about is the markets starting to bet on what was previously a minority view - a complete collapse, or break-up, of the euro. Up until the past few days, it has remained just about possible to go along with the idea that ultimately Germany would bow to pressure and do whatever might be required to save the single currency.
The prevailing view was that the German Chancellor didn't really mean what she was saying, or was only saying it to placate German voters. When finally she came to peer over the precipice, she would retreat from her hard line position and compromise. Self interest alone would force Germany to act.
But there comes a point in every crisis where the consensus suddenly shatters. That's what has just occurred, and with good reason. In recent days, it has become plain as a pike staff that the lady's not for turning.
This has caused remaining international confidence in the euro to evaporate, and even German bunds to lose their "risk free" status. The crisis is no longer confined to the sinners of the south. Suddenly, no-one wants to hold euro denominated assets of any variety, and that includes what had previously been thought the eurozone safe haven of German bunds.
Investors have gone on strike. The Americans are getting their money out as fast as they decently can. British banks have stopped lending to all but their safest eurozone counterparts, and even those have been denied access to dollar funding. The UK hardly has anything to boast of; it's got its own legion of problems, many of them not so dissimilar to those of the eurozone periphery
.
But almost anything is going to look preferable to a currency which might soon be assigned to the dustbin of history. All of a sudden, the pound is the European default asset of choice.
What we are witnessing is awesome stuff – the death throes of a currency. And not just any old currency either, but what when it was launched was confidently expected to take its place alongside the dollar as one of the world's major reserve currencies. That promise today looks to be in ruins.
Contingency planning is in progress throughout Europe. From the UK Treasury on Whitehall to the architectural monstrosity of the Bundesbank in Frankfurt, everyone is desperately trying to figure out precisely how bad the consequences might be.
What they are preparing for is the biggest mass default in history. There's no orderly way of doing this. European finance and trade is too far integrated to allow for an easy unwinding of contracts. It's going to be anarchy.
It's worth stressing here that for the moment the contingency planning is confined to officialdom. This week, for instance, we've had the Financial Services Authority's Andrew Bailey, admit that he's asked UK banks to plan for a disorderly breakup of the euro. He'd be failing in his duties if he hadn't. Europe's political elite, as ever several steps behind the reality, still regards the prospect as unimaginable.
They need to wake up fast; it's happening before their very eyes. In its current form, the single currency may always have been doomed, but it has been greatly helped on its way by an extraordinarily inept series of policy errors.
First there was the disastrous suggestion from Angela Merkel and Nicolas Sarkozy that if Greece didn't buckle under it might be chucked out. Markets reacted logically, which was to sell bonds in any country that looked vulnerable and chase "safe haven" assets, thereby making it much harder for governments to fund themselves.
The blunder was compounded by attempts to underpin confidence in the banking system by forcing banks to mark their sovereign debt to market. This may only have recognised the reality, but it also destroyed the concept of the "risk free asset", forcing banks for the first time to apply capital to their sovereign debt exposures. Unsurprisingly, they stopped buying sovereign bonds, again making it harder for governments to fund themselves.
But perhaps the biggest sin of the lot was effectively to render all credit default swaps (a form of insurance against default) on sovereign debt essentially worthless, or void, by making the Greek default "voluntary".
This has made it impossible to hedge against eurozone sovereign debt purchases, and thereby destroyed the market. Worse, it's made investors believe that the euro cannot be trusted, that it'll repeatedly find ways of reneging on contract. That's the point of no return. This is no longer a serious currency.
Portugal's Rating Cut To 'Junk' By China's Dagong

Zero Hedge,
23 November, 2011
Arguably the least biased (or perhaps least cognitively dissonant) of the major ratings agencies, China's Dagong has just moved Portugal's rating to junk (BB+) from comfortably investment grade (BBB+) - a 3 notch drop. The rating agency also left the peripheral nation on negative watch.
This action follows Monday's Greek downgrade from C to CCC. Is this a ploy for better entry levels when they save the world with their EFSF-buying bazooka? Or more likely a more honest reflection of a debt-laden, slow-growing, austerity-facing nation burdened with inadequate leadership and an inability to control its own fate?

Jill Treanor
the Guardian, Thursday 24 November 2011 19.47 GMT
The UK's status as a safe haven for bond investors grew on Thursday when yields on 10-year gilts fell below those on German bunds for the first time since spring 2009.
As the Financial Services Authority admitted it was telling banks to prepare contingency plans for a break-up of the single currency, economists said that low borrowing costs for the UK government were the latest sign of anxiety about the health of even the core countries in the eurozone.
Andrew Bailey, a senior official at the Financial Services Authority, stressed that while he was not predicting the eurozone would break apart, banks needed to think about the impact it would have on their operations. "As you would expect, as supervisors we are very keen to see that the banks plan for any disorderly consequences of the euro-area crisis. Good risk management means planning for unlikely but severe scenarios, and this means that we must not ignore the prospect of the disorderly departure of some countries from the eurozone," said Bailey.
"I offer no view on whether it will happen, but it must be within the realm of contingency planning," he added.
For article GO HERE

Has the Bank Run Begun in Europe?

In many ways, the answer to that question is obviously yes.
Money-market funds  in the United States have quite dramatically slammed shut their lending windows to European banks. According to the Economist, Fitch estimates U.S. money market funds have withdrawn 42 percent of their money from European banks in general.
And for France that number is even higher — 69 percent. European money-market funds are also getting in on the act.
Bond issuance by banks has seized up because buyers have gone on strike.
From the Economist's Free Exchange Blog:
In the third quarter bonds issues by European banks only reached 15 percent of the amount they raised over the same period in the past two years, reckon analysts at Citi Group. It is unlikely that European banks have sold many more bonds since.
Corporate depositors are also pulling their cash.
Free Exchange:
“We are starting to witness signs that corporates are withdrawing deposits from banks in Spain, Italy, France and Belgium,” an analyst at Citi Group wrote in a recent report. “This is a worrying development.”
And there are troubling signs that banks are even running out of collateral to back their borrowings from the European Central Bank  .
So far the liquidity of the European Central Bank (ECB) has kept the system alive. Only one large European bank, Dexia, has collapsed because of a funding shortage. Yet what happens if banks run out of collateral to borrow against? Some already seem to scrape the barrel.
The boss of UniCredit, an Italian bank, has reportedly asked the ECB to accept a broader range of collateral. And an increasing number of banks are said to conduct what is known as “liquidity swaps”: banks borrow an asset that the ECB accepts as collateral from an insurer or a hedge fund in return for an ineligible asset — plus, of course, a hefty fee.
Right now, according to sources I spoke with in Europe, there isn't much of a sign of retail customers withdrawing funds. But hoping that customers don't notice what is happening to every other source of bank funding is not exactly a strategy for stability.
The euro crisis
The screw tightens 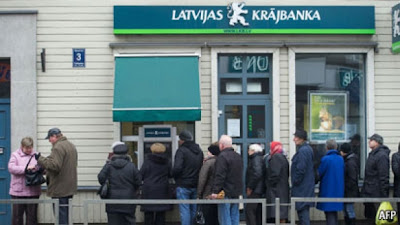 the Economist,
Nov 23rd 2011, 13:26
ONE can almost hear the gates clanging: one after the other the sources of funding for Europe’s banks are being shut. It is a result of the highly visible run on Europe’s government bond markets, which today reached the heart of the euro zone: an auction of new German bonds failed to generate enough demand for the full amount, causing a drop in bond prices (and prompting the Bundesbank to buy 39% of the bonds offered, according to Reuters).
Now another run—more hidden, but potentially more dangerous—is taking place: on the continents’ banks. People are not yet queuing up in front of bank branches (except in Latvia’s capital Riga where savers today were trying to withdraw money from Krajbanka, a mid-sized bank, pictured). But billions of euros are flooding out of Europe’s banking system through bond and money markets.
For aricle GO HERE
Posted by seemorerocks at 11:39