Not sure what these people are going to do when their emergency supplies (“ready-to-eat sandwitches”) run out.  Should have got a garden planted!
Survival Shop Reports Jump In Sales To People Preparing For “Possible Collapse” 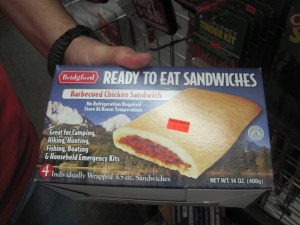 CBS,
23 November, 2011
A chain of three stores that sells survival food and gear reports a jump in sales to people who are getting prepared for the “possible collapse” of society.
“We had to order fifty cases of the meals ready to eat to keep up with the demand in the past three months,” said manager Steve Dorsey at Uncle Sam’s Safari Outfitters Inc. in Webster Groves. “That’s not normal.  Usually we sell 20 to 30 cases in a whole year.”
Dorsey says business has been brisk since the spring uprisings in the middle east, as customers share concerns about political uprisings, the world economy and the future of the United States.
“I’ve had people in here that are very wealthy and they’ve spent thousands of dollars just on backpacks that they fill with survival gear, one for each person of their family,” Dorsey said, “And something where they can just grab a bag and get out of Dodge.”
Dorsey says some customers talk of stocking up on freeze-dried meals for the home, while others confide they are stashing supplies at a remote location away from the city where they would go in an emergency.
“There are people that have property and they’ve set up different things they’re building to protect themselves like towers they can stand up and watch,” Dorsey said, “There’s a lot of people I’m dealing with who buy all kinds of stuff because they have like twenty or thirty people going in on this together and they’re all going to go to this one spot if something like this happens.”
Uncle Sam’s Safari Outfitters in Webster does not sell guns, but Dorsey also reports many customers who do not own a gun are asking where they could go to buy one.
“I think people are scared. They don’t know where this country is going. They think we’re on a downward spiral with just dramatic, crazy spending.  People just don’t know what’s going to happen,” Dorsey said.
Outside Uncle Sam’s,  it appears civilization is intact. A red, white and blue Pepsi truck pulls up to supply beverages for a nearby grocery store.  Motorists are having their cars washed at the General Grant car wash across the street.  And the brass pendulums are swinging back and forth in the clocks on the wall at Helen’s Clock Repair.
Dorsey himself admits that he does not have a personal supply of meals ready to eat stashed in his basement.  “We live just two minutes from the store,” he said, “If something happens, I can drive right over here.”
Posted by seemorerocks at 10:23