The Nazis are quite rightly remembered for burning books in the 1930’s.

What is the difference between that and throwing them into dumpsters?
This is fascism plain and simple and Bloomberg is a criminal.
Destruction of Occupy Wall Street 'People's Library' draws ire 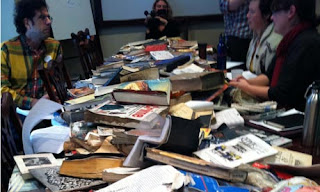 the Guardian,
Mayor Bloomberg accused of waging 'crusade to destroy a conversation' as nearly 3,000 books lost in Zuccotti Park raid
When police seized an estimated 5,000 books from Occupy Wall Street's "People's Library" during the eviction of the camp at Zuccotti Park on 15 November, it drew condemnation from a host of writers and organisations, including the American Library Association and author Salman Rushdie.
The staff of Michael Bloomberg, the New York mayor who ordered the eviction, attempted to defuse the row by promising that property from Zuccotti Park "including the OWS library" was safely stored at a sanitation department garage and could be collected.
But when the librarians arrived to survey what remained of the books, some signed copies given by authors, including one donated the previous day by Philip Levine, the US poet laureate, they found "it was clear the books had been treated as trash", they said.
At an emotional press conference on Wednesday, the librarians laid the torn and damaged books they were able to recover from the garage on a table taking up much of a cramped room in an office block in Madison Avenue.
It was a sorry sight. Only 1,273 books - a third of the stock - were returned to them, they said, and around a third of those were damaged beyond repair. Only about 800 are still usable. About 2,900 books are still unaccounted for.
The librarians, authors and supporters spoke of the loss of what had become a potent symbol of the Occupy movement and called on Bloomberg to restore the library and a public space in which people can use it.
Norman Seigel, the former director of the New York Civil Liberties Union and civil rights attorney who chaired the meeting, said he was not aware of any other instance where a city or state had destroyed a library.
"History informs us that when books are burned there is almost immediately or subsequently universal condemnation of that act. Here, the Bloomberg adminstration lost, damaged and possibly destroyed books. That is wrong."
Seigel described the library as an impressive catalogue of books, including titles such as Shakespeare's Macbeth and Othello, Dostoevsky's Crime and Punishment, the autobiography of Andrew Carnegie and even Bloomberg's own work, "Bloomberg on Bloomberg".
Seigel called on the mayor to replace "every single book" and to provide a space for a library. He said: "Bloomberg's administration needs to acknowledge that wrong has been committed and that should never happen again in this great city. We also want space for the People's Library."
One by one, the activists involved in building the library spoke of what it meant for the movement.
Mandy Hink, a professional librarian said: "I poured my heart and soul into this library. The heart of this movement is ideas and literature and sharing. The destruction of the library is an attempt to silence and destroy our movement. What type of people are we if we can't create a public space where we can share books and ideas with each other?"
Daniel Norton, a student in library science from the University of Maine at Augusta, said the library was "the creation of a community through a conversation and sharing ideas."
He accused Bloomberg of a "crusade to destroy a conversation" where people came to engage with each other.


William Scott, a professor of English at the University of Pittsburgh, a univeristy where Bloomberg studied and has a hall named after him, said: "This man threw away so many precious books. They embodied all the values that we struggle to defend in our country."
Scott, who is spending his sabbatical with Occupy, has told of how during the raid, he watched as Stephen Boyer, a poet and OWS librarian, read poems aloud from the Occupy Wall street poetry anthology to the riot police.
Writing in the Nation, Scott said: "As they pushed us away from the park with shields, fists, billy clubs and tear gas, I stood next to Stephen and watched while he yelled poetry at the top of his lungs into the oncoming army of riot police. Then, something incredible happened.

Several of the police leaned in closer to hear the poetry. They lifted their helmet shields slightly to catch the words Stephen was shouting out to them, even while their fellow cops continued to stampede us."
He recounted how the next day, an officer who had been guarding the entrance to Zuccotti Park said he was touched by the poetry and moved at how they cared enough about books to risk arrest to defend them.
Books were not the only items destroyed in the raid. One activist said she had never seen a computer come out of the sanitaion department that was not destroyed.
Gideon Oliver, a lawyer form the New York chapter of the National Lawyers Guild, described the destruction of the library as "illegal and unconscionable" and said they were looking into ways it might be addressed.

Huffington Post
NEW YORK — The New York Police Department's commissioner on Wednesday sent an internal message to officers ordering them not to unreasonably interfere with media access during news coverage and warning those who do will be subject to disciplinary action, after several journalists were arrested covering Occupy Wall Street demonstrations last week.
The message by Commissioner Raymond Kelly was being read at police precincts citywide.
A reporter and a photographer with The Associated Press were among those arrested while on private property covering a rally by protesters Nov. 15 in Manhattan. Police made the arrests after the demonstrators clipped a chain-link fence and entered a vacant lot owned by a nearby church.
The police department message notes that officers should not restrict media access on private property "to the extent it is feasible to do so."
For article GO HERE
Tents may be gone at Occupy Toronto but the beat goes on 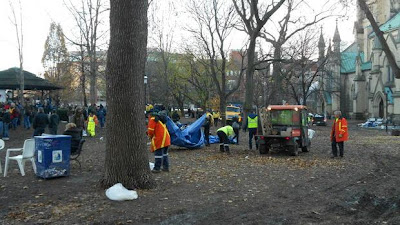 Digital Journal
The tents have been taken down at St. James Park with city crews working non-stop to remove the litter that remained. As Occupiers continued their movement amid a Sea of Blue it was clear that Toronto is unlike many of the other Occupy cities.
While the police did move in this morning under the orders of the City of Toronto, there was little hostility between Occupiers and law enforcement. At times police could be seen singing along with those protesting the 1 Percenters, as they too belong among the 99 Percent.
The tents are down at St. James Park in Toronto but the occupiers from Occupy Toronto remain, following the rules from the city for the most part. One lone tent, the Library, remains with a lone occupier refusing to leave. He waved a black flag towards the crowd that included a police circle surrounding the tent.
Those who have been at the park from the beginning are exhausted but have no plans to stop moving forward with the movement. One of the older members, Ryan, fought to stay awake but was encouraged by the numbers that had come out to support the cause. He said that there are plans to bring the message of the Occupy Movement to more areas within the city. So far the message has been taken to area schools but in the future that could spread to various community centres in both the downtown and suburb areas of Toronto.
For article GO HERE
Occupy Montreal Dwellers Issued Notice

Huffington Post
Montreal police distributed written notices to protesters at the city's Occupy camp Wednesday night, asking them to tear down their tents.
The notice orders Occupy Montreal's indignés to take down installations and structures on public property, and to respect the Victoria Square's midnight to 6 a.m. curfew bylaw.
The notices are not an ultimatum and don't include a deadline, the city said, but that necessary measures would eventually be taken to ensure compliance.
Earlier this week, Mayor Gérald Tremblay asked the protesters to find another way to express their ideas, other than occupying public space. According to the mayor, the indignés have been heard and "can leave with their heads high."
For article GO HERE
Posted by seemorerocks at 13:20