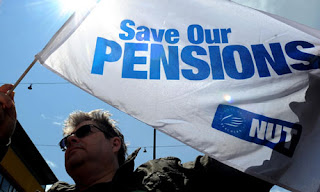 the Guardian,
27 November,
Wednesday's public sector pensions strike is more than industrial action; it is a national day of rebuke. The dispute represents many things beyond its central purpose of making ministers think again about trying to make public servants pay more, work longer, and receive less. It represents a rebuke to an elite, represented by the Conservative-dominated coalition, which has treated the banks and hedge funds in precisely the opposite way, giving them more to deliver less in lending and investment.
It also represents a resurgence of the trade union movement after a long decline for which society has paid a price. As unions have declined we have seen a rise in both inequality and the powerlessness of the poorer.
This is an unusual strike in an unusual crisis. The action is unusual because it is popular – far more than Tory class warriors seemed to anticipate. Polling shows at least half the country, and an overwhelming majority of Labour supporters, backing the "day of action".
The public will put up with the inconvenience because they understand the fairness of the public sector workers' case. I believe they also realise that – like the Occupy movement – it is raising issues about what sort of community we live in, and indeed how much inequality any society can withstand before the very notion of "society" starts to fragment.
The economic crisis is unusual, too, because it can't be blamed on "greedy trade unionists" – a novelty for workers of my generation. Trade unionists protecting their living standards were blamed by the media and the Tories every time the economy went into a slump from the second world war to the 1990s. Then, we were accused of bringing the country to a standstill.
That can't happen in 2011 – neoliberal economics and Con-Dem slash-and-burn austerity have done the job anyway, putting Britain back in recession.
The crash of 2008 and the continued economic unravelling has nothing to do with the unions. That may not stop the government talking about further laws against unions, or removing remaining protections from people at work. But it is stopping them winning the argument.
Trade unions are far from isolated today. Indeed, we got 500,000 people out on to the streets of London to demonstrate for an alternative earlier this year – more than we have done at any time in our history.
Last week ministers tried to raise a scare about the alleged cost of the day of action. The fantasy figure they came up with was £500m.
Even were it true, you would have to multiply it 248 times to get to the minimum calculation of the sum taxpayers have lost bailing out the banks: £124bn. That is why the "all in it together" rhetoric has attracted such ridicule. And there is no respect in which it is less true than pension provision. Cabinet members Francis Maude and Eric Pickles can look forward to more than £43,000 a year in retirement at the taxpayers' expense – about £37,000 a year more than the dinner ladies they are now asking to pay more to get less. For those striking it is a very different picture. They are victims of the elite policy of taking money from the taxpayer to give it to the bankers and then plugging the budget gap at the expense of some of the poorest.
Let me offer a few examples from members of Unite. A worker for the Ministry of Defence with 20 years of public service will have to start paying £870 extra a year for his pension, which is to be cut by 15%. Graeme, a firefighter from the north-east, will have to find an additional £79 a month not just until he is 60, as hitherto, but until he is 67. "Do you want a 67-year-old fireman coming to your rescue? Me neither," he says.
Carole, working for a local authority in Lincolnshire, will be on strike because "my apparently gold-plated pension will be £6,000 per year". She warns that if the government makes the scheme unaffordable, "people will walk away from it and it will fold".
With stories like this, one further thing is certain regarding Wednesday's strike. It is a beginning, not an end, unless the government starts negotiating seriously. There will be more action, more turbulence – including civil disobedience from the expanding coalition of resistance which Unite supports.
The government of Goldman Sachs is getting a grip on one European country after another. On Wednesday we will get a glimpse of an alternative – not on paper or a petition, but when millions stand up for themselves.
Posted by seemorerocks at 15:39