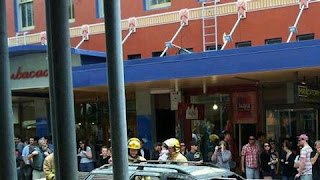 In Fiery Protest Against Fractional Reserve Lending, Disgruntled Ex-Employee of Chairman of Rural Bank of New Zealand Sets Car on Fire in Mall

Mish's Global Economic Analysis,
26 November, 2011
The New Zealand Herald reports Fiery protest Against Fractional Reserve Lending 'Endangered Public'
A Bay of Plenty farmer who set a car alight in a protest in central Wellington this afternoon has been arrested and charged with arson.
The 40-year-old man set his car on fire in Wellinton's Cuba mall at about 1.30pm.
The man said in a video posted on Facebook that he was an ex-employee of the chairman of the Rural Bank of New Zealand.
"I've learnt a lot of stuff since then, and I've had enough. I'm gonna make this car disappear," he said.
He claimed that "fractional reserve lending is the root of all our problems" before walking to the boot of the car, which was filled with rubbish, with what appeared to be a lighter.
There were shrieks from by-standers as he was thrown backwards from the force of the explosion that followed.
He then threw flaming material back into the boot of the car before closing it.
He announced to shocked witnesses that the car was full of petrol and asked them not to put it out.
"I'm just waiting for police to turn up, I've made my statement."
Plum cafe owner David Fenwick said he heard a loud bang about 1.50pm and ran out of his cafe to see what was going on.
"Suddenly we heard an explosion, so I ran out the front and saw a red station wagon, and there was a fire behind it. I thought it was a street performance gone wrong."
Mr Fenwick ran inside to grab a fire extinguisher, and with a neighbour shop employee, put out the pile of burning rubbish.
"Unfortunately it took hold pretty fast....and the fuel tank exploded. And then it was just noxious smoke and a burning car in the mall on a lovely sunny day."
The fuel tank explosion took part of the body work off, and the car was now a charred wreck with blown-out windows, he said.
The man had spraypainted the message "what is fractional reserve banking...Google it" next to the car, he said.
The YouTube video does not show the explosion or the man's statement. This Facebook video does.
Warning: Harsh hanguage as the protester is blown backwards by the explosion he caused.
For video GO HERE
I happen to agree with him. FRL is one of the root problems. However,
Posted by seemorerocks at 11:22