Will the Kyoto Protocol survive the Durban climate talks?

Financial disagreements, a pressing need to reduce emissions faster and the unlikelihood of an international agreement over the Kyoto Protocol, leaves Durban looking less than promising 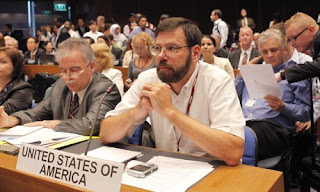 the Guardian,
Monday 24 October 2011 18.04 BST
It's October, so the annual round of UN climate talks must be close. This year it's the turn of Durban, where negotiators, campaigners and journalists will soon be headed, though probably not in the numbers that swamped Copenhagen in 2009 – or even Cancun last year. Can the South Africans succeed where the Danes and the Mexicans didn't?
A year ago the cynics were saying that South Africa saw the meeting more as a chance to attract tourists than as a serious negotiating round. But COP-17 (the seventeenth conference of the parties to the UN Framework Convention on Climate Change) will concentrate minds.
Running from 28 November to 9 December, it will be at least a theoretical chance to restore faith in the glacial progress towards agreement on an effective way to slow the human contribution to climate change.
There are three main stumbling blocks. One is whether to try to resuscitate the international climate treaty, the Kyoto Protocol, whose first phase expires in 2012.
The developing countries want to keep the Protocol, the only legally binding agreement requiring the rich world to make necessary (but far from sufficient) cuts in emissions of greenhouse gases.
The US has refused to ratify the Protocol, saying it won't accept constraints that do not apply to the world's other principal greenhouse polluter, China. And China, like other developing countries, is exempt from Kyoto's provisions.
The European Union and other industrialised countries say the US will never ratify Kyoto, and that therefore the world should let it die and work instead on some new and as yet undefined way to reduce emissions.
Then there's money. Both mitigation and adaptation (reducing emissions, and learning to live with the consequences of those you cannot avoid) are expensive, and the developing world says the rich are not keeping their promises to help them to pay to pollute less.
The third problem is really stark: how do you reduce emissions far and fast enough? Kyoto requires developed countries to cut theirs collectively to around 5% below what they were in 1990. Most climate scientists say what's needed is cuts of 80-90% below 1990 by the middle of this century.
There are some optimists as Durban nears. "The Kyoto Protocol is a cornerstone of the climate change regime, and nothing will be achieved unless it can be adopted in Durban", said the Chair of the G77 and China, Jorge Argüello of Argentina, in early October.


He said the group was "encouraged" by the "indubitable progress" it had made - a view not shared by a global civil society alliance, which said on the same day that the climate negotiations were "becoming like a Shakespearean tragedy, with betrayal piled upon broken promises".
Sara Parkin is founder director of Forum for the Future, and last year wrote The Positive Deviant: Sustainability leadership in a perverse world.
She says she stopped putting much hope into the international negotiations basket some time ago, but knows what she wants from these talks: "If anything is to come out of Durban it must include the US, and it must include a commitment to equity for poorer countries. If it doesn't produce both of these, then it will be worthless.
"What is clearer than anything else is that the sorts of things you have to do to get greenhouse emissions down are the opposite of what you have to do to achieve conventional growth", she says.
"In richer countries, certainly in the EU and the US, there doesn't seem to be an appreciation that the current crisis is in fact an opportunity to shift the economy towards a low-carbon lifestyle."
Parkin thinks Kyoto would not be too much of a loss if it were abandoned: "With Kyoto, we're trapped into something that's not ideal because it deals with emissions after they've been emitted.
"We have to be much tighter and clearer about what we need to do to stop emissions in the first place, which means moving upstream with taxes and incentives to decarbonise the economy."
And she thinks the few days spent in Durban itself can make little difference: "You need action now: campaign groups should be pressing national negotiators, so that they fear what will happen in their own countries if no progress is made.
"For example, why don't the climate change campaigners make common cause with the Occupy Wall Street protestors and the people camped outside St Paul's cathedral? It's long overdue for protesters to stop being just against things, but to collaborate for a new economy that's low on carbon and high on human wellbeing – including equity for poorer countries."
Saleemul Huq, a Bangladeshi scientist, is a climate change expert and a senior fellow at the International Institute for Environment and Development. While he thinks events like the Durban talks matter a lot, he says they are not the only place to make progress.
"In the last few years developing countries have started to take climate change quite seriously at home, including the private sector", he says.
"Even poor countries like Bangladesh are doing so. They're finding business opportunities and moving forward. The action is not in the negotiations. There's action across the world, on both adaptation and mitigation."
The Climate Change Convention entered into force in 1994. The most abundant greenhouse gas caused by human activities is carbon dioxide (CO2).


During the 1990s, CO2 emissions were rising at about 1.1% annually. Since 2000 they have been increasing at more than 3% a year.
The 2009 Copenhagen climate summit was so well-attended that the conference centre could not accommodate everyone who wanted to attend. By contrast, Cancun in 2010 had ample room for all comers – because climate change was by then slipping down the agenda of the politicians and the media.
It's unclear how long that haemorrhaging of concern may go on, but if it's not reversed soon the Convention could find itself sidelined. There are already voices calling for the negotiations to be handed over to another group, perhaps the G20 countries.
Sara Parkin is not persuaded. She says: "I'm not sure the Climate Convention has the agency which is needed to oblige countries to act. I don't think the G20 has it either.
"What could have it is the United Nations, but it would need to adapt to the changing roles of 21st century states and non-state actors in global governance."
Forget money, even forget emissions cuts: the prospects for agreement in Durban on the Convention's one legal instrument, the future of the Kyoto Protocol, look bleak, according to one of the main powerbrokers who will be there, the US chief negotiator Jonathan Pershing.
Speaking after the final round of pre-Durban talks in Panama on 10 October, Pershing said: "We do not believe that conditions are ripe in Durban for a legally binding agreement.
"We do not see a meeting of the minds on these issues... We do not want to launch negotiations on an agreement we would not be able to join."
Posted by seemorerocks at 20:38