Why the crackdown on #OWS?

Naomi Wolf:  The shocking truth about the crackdown on Occupy
Or, as George Orwell said, The Powers That Be "rule by fraud and force. When the fraud is discovered, the only thing that remains is force." (Nod to Chris Hedges).
This is a Hallmark piece of writing for our movement. It meshes with my own observations and really helps us all better understand the calculus of these rapidly-changing times.


Every Occupier needs to read this. -- MCR 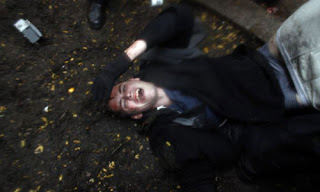 The violent police assaults across the US are no coincidence. Occupy has touched the third rail of our political class's venality
by Naomi Wolf
The Guardian,
Friday 25 November 2011 17.25 GMT
US citizens of all political persuasions are still reeling from images of unparallelled police brutality in a coordinated crackdown against peaceful OWS protesters in cities across the nation this past week. An elderly woman was pepper-sprayed in the face; the scene of unresisting, supine students at UC Davis being pepper-sprayed by phalanxes of riot police went viral online; images proliferated of young women – targeted seemingly for their gender – screaming, dragged by the hair by police in riot gear; and the pictures of a young man, stunned and bleeding profusely from the head, emerged in the record of the middle-of-the-night clearing of Zuccotti Park.
But just when Americans thought we had the picture – was this crazy police and mayoral overkill, on a municipal level, in many different cities? – the picture darkened. The National Union of Journalists and the Committee to Protect Journalists issued a Freedom of Information Act request to investigate possible federal involvement with law enforcement practices that appeared to target journalists. The New York Times reported that "New York cops have arrested, punched, whacked, shoved to the ground and tossed a barrier at reporters and photographers" covering protests. Reporters were asked by NYPD to raise their hands to prove they had credentials: when many dutifully did so, they were taken, upon threat of arrest, away from the story they were covering, and penned far from the site in which the news was unfolding. Other reporters wearing press passes were arrested and roughed up by cops, after being – falsely – informed by police that "It is illegal to take pictures on the sidewalk."
In New York, a state supreme court justice and a New York City council member were beaten up; in Berkeley, California, one of our greatest national poets, Robert Hass, was beaten with batons. The picture darkened still further when Wonkette and Washingtonsblog.com reported that the Mayor of Oakland acknowledged that the Department of Homeland Security had participated in an 18-city mayor conference call advising mayors on "how to suppress" Occupy protests.
To Europeans, the enormity of this breach may not be obvious at first. Our system of government prohibits the creation of a federalised police force, and forbids federal or militarised involvement in municipal peacekeeping.
I noticed that rightwing pundits and politicians on the TV shows on which I was appearing were all on-message against OWS. Journalist Chris Hayes reported on a leaked memo that revealed lobbyists vying for an $850,000 contract to smear Occupy. Message coordination of this kind is impossible without a full-court press at the top. This was clearly not simply a case of a freaked-out mayors', city-by-city municipal overreaction against mess in the parks and cranky campers. As the puzzle pieces fit together, they began to show coordination against OWS at the highest national levels.
Why this massive mobilisation against these not-yet-fully-articulated, unarmed, inchoate people? After all, protesters against the war in Iraq, Tea Party rallies and others have all proceeded without this coordinated crackdown. Is it really the camping? As I write, two hundred young people, with sleeping bags, suitcases and even folding chairs, are still camping out all night and day outside of NBC on public sidewalks – under the benevolent eye of an NYPD cop – awaiting Saturday Night Live tickets, so surely the camping is not the issue. I was still deeply puzzled as to why OWS, this hapless, hopeful band, would call out a violent federal response.
That is, until I found out what it was that OWS actually wanted.


The mainstream media was declaring continually "OWS has no message". Frustrated, I simply asked them. I began soliciting online "What is it you want?" answers from Occupy. In the first 15 minutes, I received 100 answers. These were truly eye-opening.


The No 1 agenda item: get the money out of politics. Most often cited was legislation to blunt the effect of the Citizens United ruling, which lets boundless sums enter the campaign process. No 2: reform the banking system to prevent fraud and manipulation, with the most frequent item being to restore the Glass-Steagall Act – the Depression-era law, done away with by President Clinton, that separates investment banks from commercial banks. This law would correct the conditions for the recent crisis, as investment banks could not take risks for profit that create kale derivatives out of thin air, and wipe out the commercial and savings banks.
No 3 was the most clarifying: draft laws against the little-known loophole that currently allows members of Congress to pass legislation affecting Delaware-based corporations in which they themselves are investors.
When I saw this list – and especially the last agenda item – the scales fell from my eyes. Of course, these unarmed people would be having the shit kicked out of them.
For the terrible insight to take away from news that the Department of Homeland Security coordinated a violent crackdown is that the DHS does not freelance. The DHS cannot say, on its own initiative, "we are going after these scruffy hippies". Rather, DHS is answerable up a chain of command: first, to New York Representative Peter King, head of the House homeland security subcommittee, who naturally is influenced by his fellow congressmen and women's wishes and interests. And the DHS answers directly, above King, to the president (who was conveniently in Australia at the time).
In other words, for the DHS to be on a call with mayors, the logic of its chain of command and accountability implies that congressional overseers, with the blessing of the White House, told the DHS to authorise mayors to order their police forces – pumped up with millions of dollars of hardware and training from the DHS – to make war on peaceful citizens.
But wait: why on earth would Congress advise violent militarised reactions against its own peaceful constituents? The answer is straightforward: in recent years, members of Congress have started entering the system as members of the middle class (or upper middle class) – but they are leaving DC privy to vast personal wealth, as we see from the "scandal" of presidential contender Newt Gingrich's having been paid $1.8m for a few hours' "consulting" to special interests. The inflated fees to lawmakers who turn lobbyists are common knowledge, but the notion that congressmen and women are legislating their own companies' profits is less widely known – and if the books were to be opened, they would surely reveal corruption on a Wall Street spectrum. Indeed, we do already know that congresspeople are massively profiting from trading on non-public information they have on companies about which they are legislating – a form of insider trading that sent Martha Stewart to jail.
Since Occupy is heavily surveilled and infiltrated, it is likely that the DHS and police informers are aware, before Occupy itself is, what its emerging agenda is going to look like. If legislating away lobbyists' privileges to earn boundless fees once they are close to the legislative process, reforming the banks so they can't suck money out of fake derivatives products, and, most critically, opening the books on a system that allowed members of Congress to profit personally – and immensely – from their own legislation, are two beats away from the grasp of an electorally organised Occupy movement … well, you will call out the troops on stopping that advance.
So, when you connect the dots, properly understood, what happened this week is the first battle in a civil war; a civil war in which, for now, only one side is choosing violence. It is a battle in which members of Congress, with the collusion of the American president, sent violent, organised suppression against the people they are supposed to represent. Occupy has touched the third rail: personal congressional profits streams. Even though they are, as yet, unaware of what the implications of their movement are, those threatened by the stirrings of their dreams of reform are not.
Sadly, Americans this week have come one step closer to being true brothers and sisters of the protesters in Tahrir Square. Like them, our own national leaders, who likely see their own personal wealth under threat from transparency and reform, are now making war upon us.


To see the video GO HERE
Posted by seemorerocks at 12:22