SocGen has released its much anticipated Multi Asset Portfolio Scenario/Strategy guide titled simply enough "Patience: bad news will become good news" where, as the insightful can guess, the French bank makes the simple case that the worse things get, the stronger the response by global central banks will be.

Here is the key quote for those worried that : "A major liquidity crisis should not occur this time, as we think we are on the eve of major QE in the UK, US and (a bit) later on in the EZ." We don't disagree and if there is anything that can send BAC higher it will be the announcement of QE3. Of course, BAC will first drop to a $2-3 handle so question is who has the balance sheet to hold on to the falling knife.

The next question is "How big will QE3 be"?

Well, according to SocGen, the Fed will preannounce it in the January 2012 FOMC statement, the monetization will last from March 2012 until the end of the year, and will buy a total of $600 billion.

We believe the actual LSAP total (not to be confused with the "sterilized" QE3 known as Operation Twist) will be well greater, probably in the $1.5 trillion range as the Fed will finally say "enough" to piecemeal solutions.

As to what to do, besides going long some financial stock and hoping it is not the one that is allowed to fail, SocGen has some simple advice: "Buy gold ahead of QE3 as money creation has a strong impact on prices"

In other words just as we suggested yesterday courtesy of the Don Coxe correlation chart. Why gold and not BAC?

Because, "Gold is highly sensitive to US QE, as every dollar of QE goes into M0, triggering the debasement of the USD. Gold = $ 8500/Oz: to catch up with the increase in the monetary base since 1920 (as it did in the early 80s). Gold = $1900/Oz: to close the gap with the monetary base increase since July 2007(QE1+QE2)." So go long a bank that may well go bankrupt and return nothing before it at best doubles, or go long a real asset, which will always have value and may quadruple in short notice? The answer seems simple to us...


From SocGen:
A combination of weak Q1 2012 GDP and softening inflation could push the Fed to another round of monetary expansion.
SG economists look for a two-step easing process:
1) In January 2012, a major announcement with the Fed promising to keep rates at zero until unemployment falls below 7.5% or inflation moves above 3% on aa sustained basis.
2) In March 2012, the announcement of another round of QE. We expect the next round of QE to be concentrated on MBS purchases and be worth about $600bn over six to eight months. This would increase the Fed’s securities portfolio from currently $2.65trn to $3.25trn by the end of 2012.sustained basis.
The specifics of what to expect from the Fed: 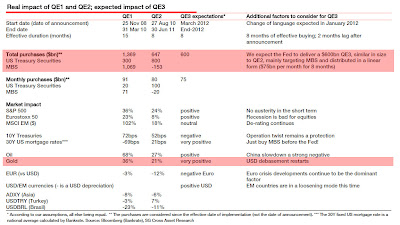 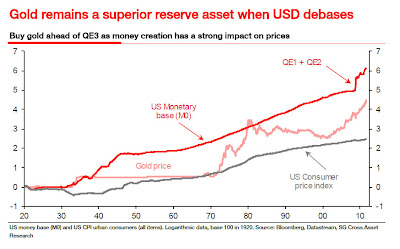 And the full presentation:
Socgen Patience - Bad News Will Become Good News
Posted by seemorerocks at 13:28