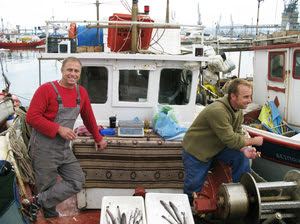 NPR
It's Sunday in Volos, a fishing village nestled in a large bay in central Greece, and fishermen display their daily catch, which this day includes codfish, sardines and octopus.
Prices have been slashed, but customers are few.


Fisherman Christos Xegandakis laughs bitterly. He says business is so bad, it's time to start swapping goods.
"Give me two kilos of potatoes, and I give you a kilo of fish," he says. "Why not?
Indeed, many in debt-ridden Greece — where radical austerity measures have led to soaring unemployment, business closures and a credit crunch — are doing just that: turning to a simpler form of commerce, bartering.
And in Volos, a barter system is also fostering a new sense of community.
Seeking Self-Sufficiency
In Greek mythology, Jason set sail from Volos in search of the Golden Fleece. More recently, the town of 100,000 people was one of the country's most industrialized.
But the recession hit its cement and steel factories hard, and now unemployment there tops 20 percent — higher than the national average.
A local veterinarian's office and shop serves as an informal community center. In this time of crisis, Volos residents come not only for their pets but also to exchange advice and information.


Teacher Alexandra Tsabouris firmly believes in self-sufficiency, as her parents did during World War II.
"If you have a garden, if you cultivate things, if you reduce your needs, if you don't have needs anymore, only in this way," she says.


Liana Papanaum, who lost her job as a secretary, has chosen a more communal approach to make ends meet.
"For example, I have a young couple near me, they have two small children. So I say, 'Could you please do the ironing for me, and I will teach English to your ... children?' " she says.
Growth In Barter Network
Volos is also one of several Greek towns with a more formal type of barter network, which uses a currency called Local Alternative Unit, or TEM in Greek. One TEM is equal in value to one euro.
People sign up for free on the barter network's website, where they can post ads on what they can offer or what they want. Members exchange goods and services — for example, English and computer lessons, baby-sitting and plumbing repairs, medical visits and car-pooling — amassing TEM credit into an online account.
Some shops also accept TEMs, in the form of vouchers that function like checks.
Optician Klita Dimitriadis explains how it works. On a pair of 100-euro glasses, she'll take 30 percent in the alternative currency. She needs the 70 euros, she explains, in order to pay her employees, taxes and rent.
Dimitriadis then spends her TEMs at a monthly open-air farmers market, or in exchange for other services.
Over the past year, TEM members in Volos have grown from a few dozen to more than 500, and the movement has attracted Athens' attention. In September, parliament passed a law giving barter networks nonprofit status.
Substitution For The Welfare State
The Volos municipality also actively encourages the TEM network. Mayor Panos Skotiniotis says initiatives like these are particularly valuable at a time when the economic crisis is dismantling so many social benefits.
"This is a substitution for the welfare state, and that is why this municipality is encouraging it and wants it to grow," he says.
The municipality has printed leaflets explaining the barter system and has promoted panel discussions.
Christos Papaioannou — one of the TEM network's founders — says the worse the crisis becomes, the more people feel confused and at a loss.
"When they lose their jobs, the whole world collapses, they have to believe in themselves, not in the power of money and their employer," he says.
And more and more people are joining the network, Papaioannou says, because it offers a sense of community and self-respect.
Posted by seemorerocks at 16:31