On Wednesday 30 November, public sector workers will protest austerity measures in more than 25 European countries, following a call for action by the European Federation of Public Service Unions. Actions will include strikes, demonstrations and public marches. 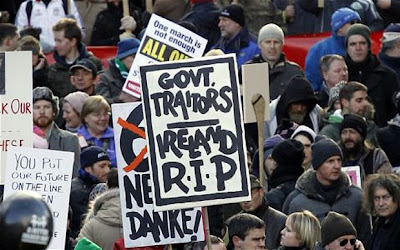 Market Watch,
29 November, 2011
In Britain, unions are planning the largest strike since 1926 - to oppose changes to public sector workers' pensions. In Portugal, trade unions will demonstrate as the parliament votes on new austerity measures. In France and Bulgaria, there will be national demonstrations. Belgian trade unions will protest outside Greek and UK embassies in solidarity with Greek and British unions on 30 November, followed by a national demonstration on 2 December. Greek trade unions will hold a general strike on 1 December. The list covers most of Europe's countries
( http://www.epsu.org/a/8178 ).
The European Commission adopted its Second Annual Growth Survey on 23 November, which continues its mantra about public administrations reforms on purely economic terms without looking at how to develop quality public services that are so badly needed in these times of economic crisis (read EPSU's response http://www.epsu.org/a/8160 ). Public sector unions expect a focus on investment and growth to address high unemployment and rising poverty.
For this reason, from Scotland to Greece and from Portugal to Poland, workers will be saying "Enough is enough!" on 30 November.
"Europe needs to make a credible stand on sustainable development, fair taxation, investment in public services, more equality and less poverty," says EPSU General Secretary Carola Fischbach-Pyttel.
EPSU has sent a letter to the Commission's President ( http://www.epsu.org/a/8159 ) demanding a financial transactions tax be instituted in Europe, as a first step towards achieving a global FTT. EPSU argues for tax justice based on progressive taxation systems.
Europe's public service unions also stand up for the right to collective bargaining and the autonomy of unions and employers. The EC and European Central Bank must stop their interference in industrial relations and collective bargaining.
"This European day of action is the beginning of a process to give European people a real sense of unity; the current policies in Europe will destroy all we have fought for in the last decades. We say no to coordinated austerity madness and yes to a social and democratic Europe," concludes Fischbach-Pyttel.
Posted by seemorerocks at 16:54