The crisis in the euro area is turning into a panic and dragging the zone into recession. The risk that the currency disintegrates within weeks is alarmingly high 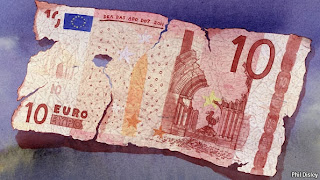 the Economist,
Nov 26th 2011
FIRST Greece; then Ireland and Portugal; then Italy and Spain. Month by month, the crisis in the euro area has crept from the vulnerable periphery of the currency zone towards its core, helped by denial, misdiagnosis and procrastination by the euro-zone’s policymakers. Recently Belgian and French government bonds have been in the financial markets’ bad books. Investors are even sniffy about German bonds: an auction of ten-year Bunds on November 23rd shifted only €3.6 billion-worth ($4.8 billion) of the €6 billion-worth on offer.
Worse, there are signs that the euro zone’s economy is heading for recession, if it is not there already. Industrial orders in the euro zone fell by 6.4% in September, the steepest decline since the dark days of December 2008. A closely watched index of euro-zone sentiment, based on surveys of purchasing managers in manufacturing and services, is also signalling contraction, with a reading of 47.2: anything below 50 suggests activity is shrinking. The European Commission’s index of consumer confidence fell in November for the fifth month in a row.
Now an even bigger calamity is looking likelier. The intensifying financial pressure raises the chances of a disorderly default by a government, a run of retail deposits on banks short of cash, or a revolt against austerity that would mark the start of the break-up of the euro zone.
The German government can probably shrug off a failed auction: it likes to price its bonds as richly as it can, and occasionally cannot sell all it would like, even in untroubled times. Still, the timing is awful, and other governments are not so lucky: the contrast between Germany’s borrowing costs and those of other euro-zone sovereigns is stark (see chart 1). European banks are dumping the bonds of the least creditworthy, and other assets, in an attempt to conserve capital and improve cashflow as a full-blown funding crisis looms. Governments are promising ever more severe budget cuts in the hope of pacifying bond markets. The direct result of these scrambles is a credit crunch and a squeeze on aggregate demand that is forcing Europe into recession. Add the indirect effects on the confidence of consumers and businesses, and the downturn will be deep.

The higher the cost of funding becomes, the more money flows out to foreigners to service these debts. This is why the issue of national solvency goes beyond what governments owe. The euro zone is showing the symptoms of an internal balance-of-payments crisis, with self-fulfilling runs on countries, because at bottom that is the nature of its troubles. And such crises put extraordinary pressure on exchange-rate pegs, no matter how permanent policymakers claim them to be.
One of the initial attractions of euro membership for peripheral countries—access to cheap funds—no longer applies. If a messy default is forced upon a euro-zone country, it might be tempted to reinvent its own currency. Indeed, it may have little option. That way, at least, it could write down the value of its private and public debts, as well as cutting its wages and prices relative to those abroad, improving its competitiveness. The switch would be hugely costly for debtors and creditors alike. But the alternative is scarcely more appealing. Austerity, high unemployment, social unrest, high borrowing costs and banking chaos seem likely either way.
The prospect that one country might break its ties to the euro, voluntarily or not, would cause widespread bank runs in other weak economies. Depositors would rush to get their savings out of the country to pre-empt a forced conversion to a new, weaker currency. Governments would have to impose limits on bank withdrawals or close banks temporarily. Capital controls and even travel restrictions would be needed to stanch the bleeding of money from the economy. Such restrictions would slow the circulation of money around the economy, deepening the recession.
External sources of credit would dry up because foreign investors, banks and companies would fear that their money would be trapped. A government cut off from capital-market funding would need to find other ways of bridging the gap between tax receipts and public spending. It might meet part of its obligations, including public-sector wages, by issuing small-denomination IOUs that could in turn be used to buy goods and pay bills.
When cash is scarce, such scrip is readily accepted by tradesmen. In August 2001 the Argentine province of Buenos Aires issued $90m of small bills, known as patacones, to employees as part of their pay. The bills were soon circulating freely: McDonalds even offered a “Patacombo” menu in exchange for a $5 pata c ón. Argentina broke its supposedly irrevocable currency peg to the dollar a few months later.
Scrip of this kind becomes, in effect, a proto-currency. In a stricken euro-zone country, it would change hands at a discount to the remaining euros in circulation, foreshadowing the devaluation to come. To pre-empt further capital outflows, a government would have to pass a law swiftly to say all financial dealings would henceforth be carried out in a new currency, at a one-for-one exchange rate with the euro. The new currency would then “float” (ie, sink) to a lower level against the abandoned euro. The size of that devaluation would be the extent of the country’s effective default against its creditors.
Market gurus and other students of misaligned stock, bond or home prices often say that although it is easy to spot an asset-price bubble, it is impossible to know the event that finally pricks it. In much the same way, the likeliest trigger for a disintegration of the euro is unknowable. But there are plenty of candidates. One is a failed bond auction that forces a country into default and sends a shock wave through the European banking system. Italy has €33 billion of debt coming due in the final week of January and a further €48 billion in the last week of February (see chart 3). Since bond investors are turning their noses up even at offerings from thrifty Germany, the odds against Italy’s being able to raise the money it needs early next year are uncomfortably short.

Another danger is a disagreement between Greece and its trio of rescuers (the EU, the IMF and the ECB) over the conditions of its bail-out. The risk of a mishap will be greater after the Greek elections in February if the country’s political mood sours yet further. Perhaps the spark will come from another source: the bankruptcy of a bank; fresh trouble in Portugal; or a chain of events that starts with France losing its AAA rating and ends with runs on banks across Europe. The exposure of French banks to Italy and to other countries that have been in bond traders’ sights for longer implies that contagion would quickly spread to the euro’s core (see chart 4). Widespread defaults in the periphery would wipe out a big chunk of Germany’s wealth and begin a chain of bank failures that could turn recession into depression.

The few left in the euro (Germany and perhaps a few other creditor countries) would be at a competitive disadvantage to the new cheaper currencies on their doorstep. As well as imposing capital controls, countries might retreat towards autarky, by raising retaliatory tariffs. The survival of the European single market and of the EU itself would then be under threat.
Such a disaster can still be averted. The ECB might launch a programme of bond-buying on the pretext that a deep recession in the euro area threatens deflation. If done on the scale that the Bank of England has undertaken, it could restore stability to Europe’s panicky bond markets. If bond purchases were made in proportion to the size of each euro member’s economy, that might go some way to overcoming German misgivings that the central bank was being used to provide favourable financing to profligate countries.
Such action by the ECB is an essential short-term palliative. But any lasting stability for the euro must lie with governments, particularly in the degree to which they are willing to give up fiscal sovereignty in return for pooling liabilities. Germany stands firmly at one extreme of this debate. Its chancellor, Angela Merkel, wants big changes to force probity (and wants the EU summit on December 9th to focus on such rule changes), but has opposed the idea of jointly guaranteed “Eurobonds”. German officials have argued that any open-ended commitment to joint liabilities would encourage errant governments to profligacy, violate Germany’s constitution and raise its borrowing costs. Even now, the head of the Bundesbank, Jens Weidmann, appears to believe that the imposition of fiscal rigour will be enough to restore calm to Europe’s bond markets. 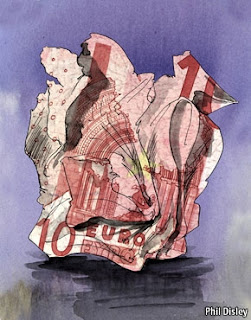 Hanging together
Others think that circumstances demand speedier concentration on ways to pool liabilities. On November 23rd the European Commission laid out three approaches for issuing Eurobonds, two of which imply mutual guarantees.
Another new proposal is intriguing—thanks, in part, to its provenance. Germany’s Council of Economic Experts recently proposed a “European Redemption Pact”. This scheme would place the debt, in excess of 60% of GDP, of all euro-zone governments not already in IMF rescue plans into a jointly guaranteed fund that would be paid off over 25 years. Modelled in part on the federal government’s assumption of the debt of America’s states begun by Alexander Hamilton in 1790, the fund would provide joint liability for these debts under strict conditions.
These would require euro-zone countries to introduce debt brakes into their constitutions, like the one Germany and Spain already have; give priority to paying off the mutualised bonds; set aside a specific tax revenue to do so; and pledge foreign-exchange reserves as collateral.
At its peak, the redemption pact would be huge: the joint liability would amount to €2.3 trillion. But it would technically be temporary. For all these safeguards, Germany’s government has so far poured cold water on the idea. But time is running out. And the scale of the impending catastrophe demands radical answers.
Posted by seemorerocks at 09:47