What will be the role of NZ troops in this duplicitous game?

Totally out of world headlines as America pursues a goal of creating chaos in the Middle East. 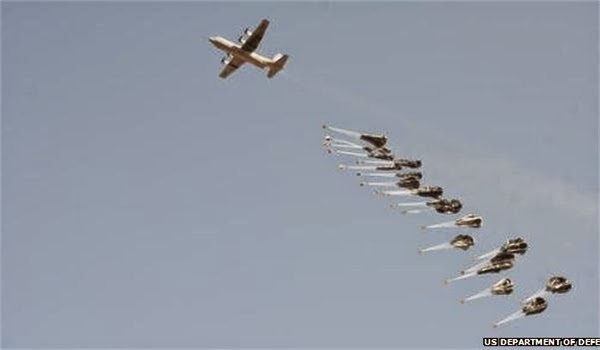 "The Iraqi Parliament's National Security and Defense Committee has access to the photos of both planes that are British and have crashed while they were carrying weapons for the ISIL," Head of the committee Hakem al-Zameli said, according to a Monday report of the Arabic-language information center of the Islamic Supreme Council of Iraq.

He said the Iraqi parliament has asked London for explanations in this regard.

The senior Iraqi legislator further unveiled that the government in Baghdad is receiving daily reports from people and security forces in al-Anbar province on numerous flights by the US-led coalition planes that airdrop weapons and supplies for ISIL in terrorist-held areas.

The Iraqi lawmaker further noted the cause of such western aids to the terrorist group, and explained that the US prefers a chaotic situation in Anbar Province which is near the cities of Karbala and Baghdad as it does not want the ISIL crisis to come to an end.

Earlier today, a senior Iraqi provincial official lashed out at the western countries and their regional allies for supporting Takfiri terrorists in Iraq, revealing that US and Israeli-made weapons have been discovered from the areas purged of ISIL terrorists.

"We have discovered weapons made in the US, European countries and Israel from the areas liberated from ISIL's control in Al-Baqdadi region," the Al-Ahad news website quoted Head of Al-Anbar Provincial Council Khalaf Tarmouz as saying.

He noted that the weapons made by the European countries and Israel were discovered from the terrorists in the Eastern parts of the city of Ramadi.

Al-Zameli had also disclosed in January that the anti-ISIL coalition's planes have dropped weapons and foodstuff for the ISIL in Salahuddin, Al-Anbar and Diyala provinces.

Al-Zameli underlined that the coalition is the main cause of ISIL's survival in Iraq.

"There are proofs and evidence for the US-led coalition's military aid to ISIL terrorists through air(dropped cargoes)," he told FNA in January.

He noted that the members of his committee have already proved that the US planes have dropped advanced weaponry, including anti-aircraft weapons, for the ISIL, and that it has set up an investigation committee to probe into the matter.

"The US drops weapons for the ISIL on the excuse of not knowing about the whereabouts of the ISIL positions and it is trying to distort the reality with its allegations.

He noted that the committee had collected the data and the evidence provided by eyewitnesses, including Iraqi army officers and the popular forces, and said, "These documents are given to the investigation committee ... and the necessary measures will be taken to protect the Iraqi airspace."

Also in January, another senior Iraqi legislator reiterated that the US-led coalition is the main cause of ISIL's survival in Iraq.

"The international coalition is only an excuse for protecting the ISIL and helping the terrorist group with equipment and weapons," Jome Divan, who is member of the al-Sadr bloc in the Iraqi parliament, said.

He said the coalition's support for the ISIL is now evident to everyone, and continued, "The coalition has not targeted ISIL's main positions in Iraq."

In late December, Iraqi Parliamentary Security and Defense Commission MP disclosed that a US plane supplied the ISIL terrorist organization with arms and ammunition in Salahuddin province.

MP Majid al-Gharawi stated that the available information pointed out that US planes are supplying ISIL organization, not only in Salahuddin province, but also other provinces, Iraq TradeLink reported.

He added that the US and the international coalition are "not serious in fighting against the ISIL organization, because they have the technological power to determine the presence of ISIL gunmen and destroy them in one month".

Gharawi added that "the US is trying to expand the time of the war against the ISIL to get guarantees from the Iraqi government to have its bases in Mosul and Anbar provinces."

Also in Late December, a senior Iraqi lawmaker raised doubts about the seriousness of the anti-ISIL coalition led by the US, and said that the terrorist group still received aids dropped by unidentified aircraft.

"The international coalition is not serious about air strikes on ISIL terrorists and is even seeking to take out the popular (voluntary) forces from the battlefield against the Takfiris so that the problem with ISIL remains unsolved in the near future," Nahlah al-Hababi told FNA.

"The ISIL terrorists are still receiving aids from unidentified fighter jets in Iraq and Syria," she added.

Hababi said that the coalition's precise airstrikes are launched only in those areas where the Kurdish Pishmarga forces are present, while military strikes in other regions are not so much precise.

In late December, the US-led coalition dropped aids to the Takfiri militants in an area North of Baghdad.

Field sources in Iraq told al-Manar that the international coalition airplanes dropped aids to the terrorist militants in Balad, an area which lies in Salahuddin province North of Baghdad.

In October, a high-ranking Iranian commander also slammed the US for providing aid supplies to ISIL, adding that the US claims that the weapons were mistakenly airdropped to ISIL were untrue.

“The US and the so-called anti-ISIL coalition claim that they have launched a campaign against this terrorist and criminal group - while supplying them with weapons, food and medicine in Jalawla region (a town in Diyala Governorate, Iraq). This explicitly displays the falsity of the coalition's and the US' claims,” Deputy Chief of Staff of the Iranian Armed Forces Brigadier General Massoud Jazayeri said.

The US claimed that it had airdropped weapons and medical aid to Kurdish fighters confronting the ISIL in Kobani, near the Turkish border in Northern Syria.

The US Defense Department said that it had airdropped 28 bundles of weapons and supplies, but one of them did not make it into the hands of the Kurdish fighters.

Video footage later showed that some of the weapons that the US airdropped were taken by ISIL militants.

The Iranian commander insisted that the US had the necessary intelligence about ISIL's deployment in the region and that their claims to have mistakenly airdropped weapons to them are as unlikely as they are untrue.

“The Iraqi Parliament’s National Security and Defense Committee has access to the photos of both planes that are British and have crashed while they were carrying weapons for the ISIL,” Head of the committee Hakem al-Zameli said, according to the Arabic-language information center of the Islamic Supreme Council of Iraq.

The incident was reported by foreign and alternative media but not mentioned by the establishment media in the U.S. Europe.

Hakem al-Zameli, a senior Iraqi legislator, added that the current government in Baghdad is receiving daily reports from security forces in al-Anbar province about flights airdropping weapons to ISIS.

He said the U.S. wants to promote chaos in Iraq and does this by supporting the Islamic State.

Other Iraqi lawmakers are complaining about the situation.

“We have discovered weapons made in the US, European countries and Israel from the areas liberated from ISIL’s control in Al-Baqdadi region,” the al-Ahad news website quoted the head of the al-Anbar Provincial Council Khalaf Tarmouz as saying.

Weapons made in Europe and Israel were also discovered in Ramadi, Tarmouz said.

“The US drops weapons for the ISIL on the excuse of not knowing about the whereabouts of the ISIL positions and it is trying to distort the reality with its allegations,” he said.

Iraqi volunteers fighting against IS in the Yathrib and Balad districts in Iraq’s Salahuddin Province reported the air drops.

Iraq claims it now has the upper hand in the battle to regain territory from the terrorist group.

In October a purported errant airdrop of weapons fell into the hands Islamic State fighters outside Kobani in Syria.

“The Iraqi intelligence sources reiterated that the US military planes have airdropped several aid cargoes for ISIL terrorists to help them resist the siege laid by the Iraqi army, security and popular forces,” a report stated.

“What is important is that the US sends these weapons to only those that cooperate with the Pentagon and this indicates that the US plays a role in arming the ISIL.”

In July, Infowars.com reported on the large amount of U.S. weapons captured by ISIS.

The acquisition of sophisticated weapons converted ISIS from a terrorist group into an army capable of waging conventional war in Iraq and Syria.