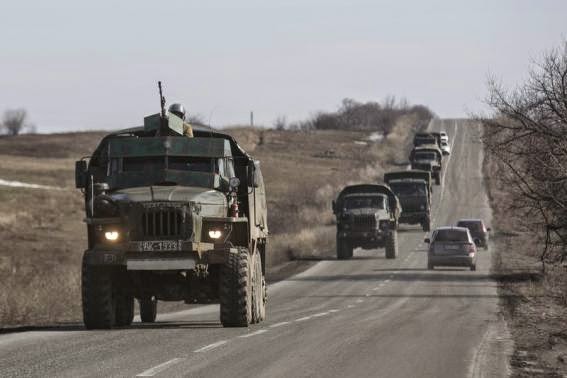 (Reuters) - Kiev accused pro-Russian rebels of opening fire with rockets and artillery at villages in southeastern Ukraine on Monday, all but burying a week-old European-brokered ceasefire deal.

The Ukrainian military said it could not pull weapons from the front as required under the tenuous truce, as long as its troops were still under attack.

Ukraine's currency, nearly in freefall this month, fell a further 10 percent on Monday on fears that the truce could collapse. The central bank said it would tighten currency rules to sustain the hryvnia. The value of Ukrainian debt also fell, with bonds now trading at 40 cents in the dollar.

The reported shooting came closer to killing off the truce, intended to end fighting that has killed more than 5,600 people, which rebels ignored last week to capture the strategic town of Debaltseve in a punishing defeat for Kiev.

Kiev and its Western allies say they fear the rebels, backed by reinforcements of Russian troops, are planning to advance deeper into territory the Kremlin calls "New Russia". Moscow denies aiding the rebels.

Fighting has diminished since Kiev's forces abandoned Debaltseve in defeat last Wednesday, and there were hopeful signs for the truce over the weekend, with an overnight exchange of around 200 prisoners late on Saturday and an agreement on Sunday to begin pulling back artillery from the front.

But Kiev said on Monday that two of its soldiers had been killed and 10 wounded in overnight fighting.

"Given that the positions of Ukrainian servicemen continue to be shelled, there cannot yet be any talk of pulling back weapons," spokesman Vladislav Seleznyov said.

Dmytro Chaly, spokesman for the Ukrainian military in the port of Mariupol, a city of 500,000 people which Kiev fears will be the next target, said rebels opened fire in the afternoon with Grad rockets, artillery and tanks on villages nearby.

Anatoly Stelmakh, another military spokesman, said rebel forces had attacked the village of Shyrokyne on the coast road towards Mariupol overnight.

"The fighters have not stopped their attempts to storm our positions in Shyrokyne, in the direction of Mariupol. At midnight armed groups again attempted unsuccessfully to attack our soldiers. The battle lasted half an hour."

Rebel commander Eduard Basurin denied rebel fighters had launched any such attack, and said the situation was calm. "At the moment all is quiet, there is no shelling," he told Reuters.

The head of the Kiev-controlled Donetsk regional police, Vyacheslav Abroskin, said one police officer was killed and two wounded in Mariupol in a shootout when they stopped a militant "reconnaissance group" carrying explosives in a car. One of the rebels was also killed.

Western countries still hope the truce can be salvaged if the rebels halt, now that they achieved their objective at Debaltseve last week. The foreign ministers of France, Germany, Russia and Ukraine will meet on Tuesday in Paris to try to get the peace deal back on track, a French diplomatic source said.

But Germany, whose Chancellor Angela Merkel was the driving force behind the peace deal, said in unusually strong terms that it was now clear that the ceasefire was not being implemented.

British Prime Minister David Cameron said any further attempt to expand rebel territory would be met with fresh Western sanctions on Moscow: "Far from changing course, Russia’s totally unjustifiable and illegal actions in eastern Ukraine have reached a new level with the separatists’ blatant breach of the ceasefire," he told parliament.

Nevertheless, the U.S. ambassador to NATO Douglas Lute said it was still too early to "give up hope on the ceasefire" and Russian President Vladimir Putin told state television the deal was the right way to resolve the crisis.

There were signs, however, that a deal reached late last year to ensure Ukraine receives gas from Russia was also in jeopardy. Last week, Kiev cut back supplies of gas to rebel-held areas and Moscow said it would supply some gas to the rebels directly. On Monday, Ukraine's gas company said Russia had failed to deliver some supplies Kiev had paid for in advance.

In Debaltseve, now under rebel control, thousands of civilians who were trapped through the storming of the town are still living in cellars in the ruins. No one has tallied the civilian dead from last week's assault.

Nina Shono, 80, one of eight people sheltering in a basement beneath the ruins of their five-storey apartment building, made soup and baked bread on a homemade wood-burning stove in the darkness while a rat scampered in a corner.

"When we were bombed, we were praying and I was crossing myself, everything was collapsing. One explosion. The second explosion, the third. But we are still sitting here," she said.

In the biggest rebel stronghold Donetsk, occasional artillery fire could be heard through the night and on Monday morning, although it was not clear who was firing and it was far less intense than before the truce.

Nearly a million people have been driven from their homes by the war between pro-Moscow separatists in eastern Ukraine and government forces. Rebels say they launched their advance because previous battle lines had left their civilians vulnerable to government shelling.

Donetsk resident Sergei, 52 said he could do no more than hope that the truce would work out. "No one knows what will happen with the way the sides are behaving," he said.

Kiev fears unrest could spread to other parts of the mainly Russian-speaking east, where its troops are in control and most residents are loyal but violent separatist demonstrations have occasionally flared in the past year.

Two people were killed on Sunday in Kharkiv, 200 km (125 miles) from the war zone, in a blast at a pro-Ukrainian rally. Kiev said it had arrested four suspects who had received weapons and instructions in Russia.