How long before we hear a similar warning from Bill English? 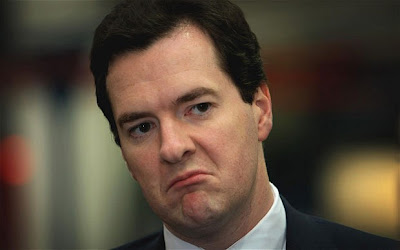 the Telegraph,26 February, 2012
In a stark warning ahead of next month’s Budget, the Chancellor said there was little the Coalition could do to stimulate the economy.
Mr Osborne made it clear that due to the parlous state of the public finances the best hope for economic growth was to encourage businesses to flourish and hire more workers.
“The British Government has run out of money because all the money was spent in the good years,” the Chancellor said. “The money and the investment and the jobs need to come from the private sector.”
Mr Osborne’s bleak assessment echoes that of Liam Byrne, the former chief secretary to the Treasury, who bluntly joked that Labour had left Britain broke when he exited the Government in 2010.
He left David Laws, his successor, a one-line note saying: “Dear Chief Secretary, I’m afraid to tell you there’s no money left”.
Mr Osborne is under severe pressure to boost growth, amid signs the economy is slipping back into a recession.
The Institute of Fiscal Studies has urged him to consider emergency tax cuts in the Budget to reduce the risk of a prolonged economic slump.
But the Chancellor yesterday said he would stand firm on his effort to balance the books by refusing to borrow money. “Any tax cut would have to be paid for,” Mr Osborne told Sky News.
“In other words there would have to be a tax rise somewhere else or a spending reduction.
“In other words what we are not going to do in this Budget is borrow more money to either increase spending or cut taxes.”
The strongest suggestion of help for squeezed family budgets came from the Chancellor’s claim that he was “very seriously and carefully” considering plans to help lower earners by raising the personal allowance for income tax, a proposal that has been championed by Nick Clegg, the Deputy Prime Minister.
But he implied there would be no more help for motorists struggling with record petrol prices this spring. “I have taken action already this year to avoid increases in fuel duty which were planned by the last Labour government,” he said.
The Chancellor’s tough words were echoed by Liberal Democrat Jeremy Browne, the foreign minister, who warned that Britain faced “accelerated decline” without measures to tackle its debt and increase competitiveness.
In an article published today in The Daily Telegraph, he writes that Britain’s market share in the world used to be “dominant” but was now “in freefall” compared with the soaring economies of Asia and South America. “This situation has been becoming more acute for years,” he adds. “It is now staring us in the face. So we need to take action.”
Mr Browne writes that reform of pensions, welfare and defence is essential to stop the departments “collapsing under the weight of their own debt”. “Just because the spending was sometimes on worthy causes does not in itself mean it was affordable,” he says.
“Doing nothing when your prospects are at risk of declining is not the safe option. More of the same may be superficially more popular in the short-term but that does not make it right.”
Amid warnings that Britain urgently needed to adopt a more pro-business outlook, senior Conservatives have urged the Government to get rid of the 50 pence top rate of tax.
Figures from the Treasury last week suggested the policy was not raising the expected amount of revenue and was threatening to drive leading business people and entrepreneurs away from Britain. Dr Liam Fox, the former Conservative Defence Secretary, yesterday argued for the top tax rate to be scrapped, but added that cutting taxes on employment was even more important.
“I would have thought the priority was getting the costs of employers down and therefore I would rather have seen any reductions in taxation on employers’ taxation rather than personal taxation,” he told the BBC’s Sunday Politics show.
Any efforts to scrap the rate this parliament would face severe opposition from within the Coalition.
Simon Hughes, Liberal Democrat deputy leader, said yesterday that keeping the current 50p rate was “the right thing to do”. He told the BBC: “I represent people in a pretty solid working-class community. What they’re concerned about is what happens to ordinary people out of work and where they get jobs.”
Last night, Labour argued Mr Osborne needed to take a more proactive stance on boosting growth by increasing public spending.
Chris Leslie MP, the shadow Treasury minister, said it was wrong of the Chancellor to argue that Britain was broke and to rely on business alone to create economic growth.
“George Osborne can’t complacently wash his hands and claim the lack of jobs and growth in the economy is nothing to do with him,” he said.
“He needs to realise that government has a vital role to play in creating an environment where the private sector can grow and create jobs.”
Harriet Harman, Labour’s deputy leader, urged Mr Osborne to cut VAT.
Meanwhile, the Chancellor made it clear he was resisting pressure to hand over up to another £17.5billion in taxpayers’ money to help bail out struggling European Union countries.
He said Europe had not “shown the colour of its money” by taking measures to help itself tackle its debt problems.
Until that happens, Britain will not give any extra funds to the International Monetary Fund.
The Chancellor was speaking as finance ministers from the world’s 20 most powerful economies met in Mexico.
Mr Osborne said: “While at this G20 conference there are a lot of things to discuss; I don’t think you’re going to see any extra resources committed (to the IMF) here because eurozone countries have not committed additional resources themselves, and I think that quid pro quo will be clearly established here in Mexico City.”
Posted by seemorerocks at 13:35