I remember Australian TV coverage back in 1990 predicting just this.
Australia's surfers mourn disappearing east coast beaches as currents sweep sand out to sea
Hundreds of miles of Australia's most popular beaches are shrinking as ocean currents sweep their sands out to sea, to the dismay of millions of surfers. 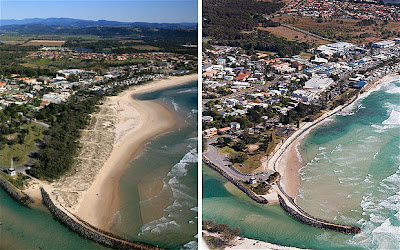 the Telegraph, 25 February, 2012
At Kingscliff Beach on Australia's east coast, home to one of the country's oldest surf clubs, tourists and locals have long spent summers on the lush stretch of golden sand. But now the beach is no longer there.
Instead, the 65-yard-wide stretch of sand – hundreds of thousands of cubic metres of it - has disappeared, swept into waters to the north where it has been carried by the tide to form sandbanks.
And with it have gone some of the classic images of Australia's coast - a surfing mecca that lures more than two million people a year to ride the waves, and many more to swim off the spectacular beaches.
Of 309 regularly frequented stretches of surfing coastline, 38 now have beach areas that have shrunk to 30 feet wide or less. Heavily eroded beaches include Sydney's second-longest, Narrabeen-Collaroy, which has had to have thousands of tons of sand trucked in and dumped along its two-and-a-quarter mile shoreline.
At the resort town of Noosa, on Queensland's Sunshine Coast, beaches have lost up to 50 yards in width over the past three years.
Asked whether the beaches will ever return to their former state, Rodger Tomlinson, one of Australia's leading experts on coastal erosion, said simply: "We don't know."
The rapid disappearance of the sand has puzzled scientists, who are still trying to gauge its varying causes and are examining whether – and to what extent - the beaches will ever be naturally restored by currents bringing new deposits of sand from elsewhere.
The most likely culprit, they believe, is a change in weather conditions, with increasingly frequent storms caused by La Nina, a cyclical cooling in ocean temperatures that seems to be recurring more frequently.
In the past 18 months, Australia has endured one of the fiercest La Nina events in history - leading to its wettest two-year period since instrumental recording began in the 1880s, and causing devastating floods across large areas inland.
Along the coast, powerful storms and strong tides have swept away the sand, while changes in wave direction have dragged it offshore. As a result there is a new threat to coastal properties, with erosion of cliffs accelerated not because of rising tides – the ocean at Kingscliff only has a tidal variation of about five feet - but because the beach that dissipated the power of the waves has been diminished as the sand has gone.
Scientists say it could take a decade or more for these beaches to be naturally restored - if, indeed, they ever are.
"This is a new situation for us - the sand is all gone," said Richard Adams, who runs a holiday park overlooking what used to be the beach at Kingscliff, 50 miles south of Brisbane. "This was all thick fluffy white sand, not this white water you can see now. It used to be one of the best beaches in Australia."
Some 80 per cent of Australians live on or near to the coast, and much of development near the edge of the ocean occurred during a period of relatively mild weather towards the end of the last century.
"We had pretty calm weather throughout the last three decades – now we are moving back into an era of stormy conditions, especially with La Nina," Prof Tomlinson said. "The erosion seems to be triggered by reasonably sized storms and very subtle shifts in wave direction.
"We also think we are having a situation of more energetic wave conditions, possibly caused by warmer waters offshore."
The disappearance of the sand has worried local lifesavers, who stand trained and ready with rescue equipment but have little or no beach to patrol.
"We're a bunch of lifesavers who essentially can't get on to our beach," said a disgruntled team member, Andrew Jones. His beach, Old Bar in northern New South Wales, has lost 75 yards of frontage in the past 18 months. A report commissioned by Surf Life Saving Australia, the organisation responsible for water safety and rescue, found 63 per cent of the country's surf lifesaving clubs were themselves erected in "zones of potential instability".
At Kingscliff, where a hastily built wall has helped save the headquarters from collapse, locals joke that they may have to turn their 90-year-old surf club into a yacht club.
Dot Holdom, a councillor who has lived in the town for 30 years, said the only recent increase in visitors has been from "disaster tourists" who stop by to see the vanished beach.
"It was traumatic watching the beach go," she said. "You're torn between awe at mother nature and dismay at watching something that you love fall away. But it is not the end for the town. It has just changed."
According to Prof Tomlinson, Australians will have to accept that they must either "retreat" from parts of the coast, or just accept that the beaches will increasingly disappear.
"The average person thinks the beach was there last year when they went on their holidays, so it will be there again next year," he said.
"Australians have not really adjusted. We still have that special relationship to the beach; it's our holiday destination, our economy, our relaxation. But in the absence of proper management, we are going to see a long term reduction in our beaches."
Posted by seemorerocks at 10:13