Dmitry Orlov reported that Syrian friends of his had indicated there is 'nothing happening' in Damascus; the events are in other areas of the country - the 'revolution' is fake. 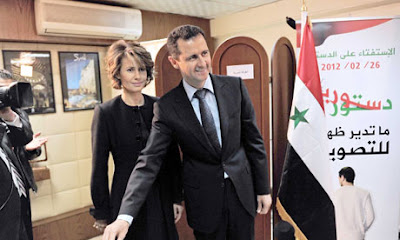 the Guardian,
27 February, 2012
Syria has claimed that a constitutional referendum held on Sunday was approved by close to 90% of voters, even as international reaction to its ongoing crackdown intensified with the European Union announcing fresh sanctions against key regime figures.
Bloodshed continued in restive parts of the country on Monday. Activist groups said 124 people had been killed the day after the ballot, which had been hailed as a showpiece of reform in the rigidly controlled state. The death toll could not be independently verified.
The Baba Amr district of the country's third city, Homs, was again the worst affected, with up to 64 people said to have died while trying to flee the area on Monday. Efforts to evacuate a large number of wounded from the embattled neighbourhood – among them two western reporters injured during a rocket attack that killed the Sunday Times correspondent Marie Colvin and French photographer Rémi Ochlik last Wednesday – continued.
The International Committee for the Red Cross has being trying to negotiate a safe exit from Baba Amr for the past five days, but efforts have been stymied by the ongoing military assault on the area and deep distrust between regime and opposition forces.
Syrian officials said 57% of citizens took part in Sunday's referendum, which aimed to remove the Ba'ath party from its pre-eminent position in Syrian society and open up future elections to multiparty candidates. The referendum also aims to impose a two-term – or 14-year – cap on the term of a president, a change that will not be imposed retrospectively, meaning Bashar al-Assad could remain as the country's leader from an election mooted in 2014 until 2028.
The Council of the European Union said new sanctions would be imposed on Syrian government ministers, denying them entry to the EU and freezing assets of the Syrian Central Bank held in the EU.
The new sanctions also deny Syrian cargo planes access to EU airports and ban trade with Syria involving precious metals and diamonds.
"Today's decisions will put further pressure on those who are responsible for the ruthless campaign of repression in Syria," Catherine Ashton, the EU foreign policy chief, said in a statement on Monday. "The measures target the regime and its ability to conduct the appalling violence against civilians. As long as the repression continues, the EU will keep imposing sanctions."
"We need to get the Assad regime to stop killing the population and we need to find ways in which, for the right reasons, that comes about as swiftly as possible," Ashton said. "In our perspective, it's very straightforward – you cannot lead your people, murder them and remain in leadership."
The Syrian referendum has been described as meaningless by opposition groups, Turkey, the US and European states. All diplomatic efforts to force the regime to stop its relentless crackdown on dissent have failed, most noticeably two high-profile attempts via the United Nations security council, which were vetoed by key allies of Damascus, Russia and China.
A conference, dubbed the Friends of Syria, held in Tunisia over the weekend, partly to bypass the failed UN process, has also failed to bring a halt to the crackdown, which is thought to have killed more than 7,000 citizens as well as more than 2,000 members of the security forces.
The conference called for an urgent ceasefire and the establishment of a humanitarian corridor to allow food and medicines to reach battle-hit areas in the west and north of the country.

RT,
27 February, 2012
The EU has recognized the Syrian National Council, one of the main opposition groups, as a legitimate representative of the Syrian people. The decision came as the EU ministers met in Brussels to slap Syria with its toughest set of sanctions yet.
Although the EU ministers recognized the SNC as the “official opposition”, French Foreign Minister Alain Juppe told journalists that there are other groups opposed to Assad’s regime which should be urged to unite and become more organized.
The EU continues to execute its strategy of putting political and economic pressure on the Syrian regime to force President Bashar al-Assad out of power. Verbally, the West maintains its support of the opposition, at the same time reiterating that a Libya-style scenario will not be repeated in Syria.
Some of the Arab countries, however, advocate a direct military intervention in the country to stop “the bloodshed against the civilians.”
The Qatari Prime Minister voiced his unbounded support of the opposition on Monday, saying that the international community should arm the rebels, since it failed to find a solution to the crisis by the means of United Nations Security Council.
"I think we should do whatever is necessary to help them, including giving them weapons to defend themselves," Sheikh Hamad bin Jassim al-Thani said on Monday during a visit to Norway. “I think we have to try to do something to send enough military help to stop the killing."
Saudi Arabia is also backing the idea of arming the rebels, with Saudi Foreign Minister Saud al-Faisal saying that giving weapons and ammunition to groups fighting the Syrian regime is “an excellent idea” because “they have to defend themselves."
Syria’s Foreign Ministry spokesman Jihad Makdissi said that militarizing the Syrian opposition is a big mistake that will backfire. The West is trying to destabilize Syria for geopolitical reasons, Makdissi said in an interview with the Associated Press.
EU imposes tough new sanctions
Foreign ministers of the European Union have agreed to sanction the country's central bank, freeze assets of several high-ranking Syrian officials, halt purchasing gold and ban cargo flights to Syria from the EU.
This is not the first – or even the second – time the 27-nation bloc has taken such steps. Their effects have yet to be seen, but EU leaders believe that applying as much pressure – both diplomatic and economic – as possible on the Assad regime will lead to positive changes in the conflict-torn nation.
Europe would prefer to have even tougher sanctions in play, from the United Nations, but Russia and China's position as permanent, and therefore veto-wielding, members, has so far prevented UNSC measures.
British Foreign Secretary William Hague expressed the West's continued frustration with Moscow and Beijing for preventing stronger action against Syria at the United Nations.
"I hope that China and Russia will see that it has been a mistake to take this position, that it is damaging their own interests in the Middle East, that it is wrong in the eyes of the world," Hague told reporters.
To both Moscow and Beijing, however, there is a greater wrong – using UN resolutions to justify a military involvement, as happened in Libya.
Posted by seemorerocks at 09:10