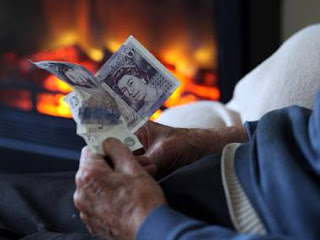 the Independant,
27 February, 2012
More than nine million households will be living in fuel poverty within four years unless the Government directs £4bn a year from carbon taxes to families in greatest need, campaigners warn.
Click here to see the 'Burning money: The rise of fuel poverty' graphic
More Britons die every year from living in a cold home than on the roads, they said, with the situation expected to worsen sharply because of soaring utility bills.
A new study has revealed that there are a million more households already living in fuel poverty compared with previous estimates, taking the total to 6.4 million. The study, by energy efficiency experts Camco, suggests that the total will hit 9.1 million by 2016.
Mike O'Connor, chief executive of Consumer Focus, said: "It is a harsh truth that an effective strategy to transform the energy efficiency of our homes and to tackle growing numbers in fuel poverty will need far greater ambition and resources. Billions of pounds will go directly from our energy bills to the Exchequer as part of schemes to cut carbon emissions. That money could reap a double benefit if it was directed to reduce massively our wasteful consumption of energy."
The campaign, called the Energy Bill Revolution, was created by Transform UK, a not-for-profit organisation.
Ed Matthew, of Transform UK, said: "More people die every year in the UK from living in a cold home than die on our roads. Millions more struggle to make ends meet in the face of high energy bills. This is a national scandal."
Camco reckons that if the Government's annual £4bn revenue were recycled to households to spend on energy efficiency measures, it would be enough to bring nine out of 10 households out of fuel poverty. It could also be used to create 200,000 jobs and quadruple carbon emission cuts compared to the Government's new energy efficiency schemes, it claims.
Mr Matthew said that if carbon revenue – from the EU Emissions Trading Scheme and Carbon Floor Price – were recycled back to households to spend on energy efficiency measures, it could be used to help all households or used to support the most vulnerable.
"It could provide, for example, an average grant of £6,500 to make 600,000 fuel-poor homes highly energy efficient every year," he said.
"This would bring down their energy bills each year by £310 and remove nine out of 10 homes from fuel poverty in 15 years. The rest would have their homes brought up to the energy efficiency standard of a home built today."
A petition is being launched today at www.energybillrevolution.org to raise support for the Energy Bill Revolution campaign. It is already backed by more than 50 charities, unions, consumer groups and businesses, including Save the Children, the National Pensioners' Convention, Consumer Focus and the Co-operative Group.
Paul Monaghan, head of social goals at the Co-operative, said: "The UK can get to grips with fuel poverty and not only keep carbon emissions reducing, but secure increased buy-in from the general public. Right now the elderly and poor suffer the most, but left unchecked this is going to become an issue for everyday families."
Last week the children's charity Barnardo's said rising energy prices have left the poorest families £450 short of being able to adequately heat their homes. Barnardo's chief executive Anne Marie Carrie said: "We need to get serious about tackling fuel poverty. Families should never have to choose between whether to heat their homes or put food on the table for children."
She said poorer families are most hit by energy companies because they use pre-payment meters to pay off debt and to pay for gas and electricity
.
"Effectively these families are being penalised by their payment method at a time when they need the most financial help," she said. "Energy companies have a moral duty to behave responsibly by ensuring that the poorest families are on the lowest tariffs available and that prices for pre-payment meters are brought down to the same rates as online tariffs."
She urged the Government to tackle fuel poverty by bringing forward the requirement on landlords to make their properties energy efficient for tenants.
Case study: 'I worried about the kids' health'
Lesley Perry lives with her husband Matthew and their five children in a large, high-ceilinged property in Bournemouth. It seemed like a "God-send" when they moved in, amid a shortage of council homes, but they were soon crippled with fuel poverty. The family are currently being supported by a Barnardo's children's centre.
I made curtains to try and keep the warm in as the windows didn't have double glazing – only shutters. I bought cold excluders for the doors too, but it was still cold. I started noticing damp patches appearing on the walls. I was worried about the health of the kids and our finances were really dwindling. The children's needs will always be our priority. We won't go out in the car for days because the petrol's too expensive, but that means we stay in and have to have the heating on. It's a vicious circle and we just go without if we have to.
Posted by seemorerocks at 09:36