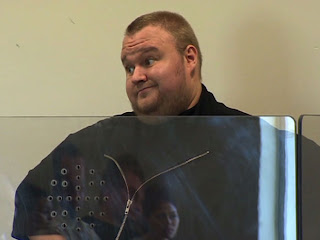 3 News,
28 February, 2012
Megaupload founder Kim Dotcom may find himself back behind bars as early as tomorrow night.
A High Court judge in Auckland is considering whether to revoke his bail, because he might still be a flight risk. The United States government claims Dotcom may still have access to funds – stashed around the world.
He is known for his lavish lifestyle, yet Dotcom arrived in court in black socks and Crocs to face the US government’s attempts to get him back behind bars.
Crown prosecutor Anne Toohey said the judge that gave Dotcom bail last Wednesday mistakenly ruled that all of Dotcom’s assets were frozen and he was no longer a flight risk.
“Any emergency fund that Mr Dotcom has would be better disguised and unlikely to be in New Zealand,” Ms Toohey told the High Court.
America wants to extradite the internet mogul to face charges of racketeering and copyright fraud.
Assets in New Zealand worth $20 million have been seized, another $40 million in funds are frozen around the world.
But prosecutors believe there could be more and Dotcom might flee to Germany, which has no extradition agreement with the US.
“That risk in my submission remains, because there is no guarantee at all given the scale of Mr Dotcom’s companies and investments,” says Ms Toohey.
But Dotcom’s lawyer Paul Davison QC says there are no hidden funds – everything had been spent on Dotcom’s extravagant tastes.
He summed up by saying Dotcom wouldn’t run.
“It would make no logical sense, given he would be abandoning his assets, given disruption to family it would make no personal sense.”
There was no chance of a speedy decision in this complex case. Justice Brewer immediately announcing he would reserve his decision until 4:30 tomorrow.
So the Megaupload mogul left court with his pregnant wife Mona in tow.
He has only been out for a week, and tonight might be his last with his family.
Posted by seemorerocks at 21:05