This is something that Max Keiser has often repeated - up to now I had never really seen anything to back that up
Two Year Reminder For The Fed: How Is That Investigation Into Goldman's Greek Currency Swaps Going? 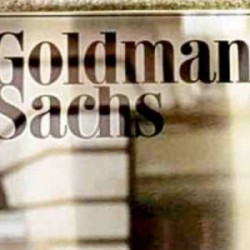 25 February, 2012
There are those who remember that back in February 2010, before the world realized just how broke Greece was, the public's deplorably short attention span was briefly focused on none other than Goldman Sachs, which as so often happens, was at the heart of the scheme enabling Greece to skirt by Maastricht regulations and mask the fact that its debt and deficits were both far worse than represented publicly.

There are also some who remember that back in February 2010, it was none other than the Federal Reserve that tasked itself with uncovering whether Goldman did anything "illegal" by engaging in currency swaps to make the Greek economy appear rosier than it was: "We are looking into a number of questions related to Goldman Sachs and other companies and their derivatives arrangements with Greece," Bernanke said in testimony before the Senate Banking Committee.... Greece in 2001 borrowed billions, with the aid of Goldman Sachs in a deal hidden from public view because it was treated as a currency trade rather than a loan....Goldman Sachs spokesman Michael DuVally declined to comment on the Fed's probe.

"As a matter of policy we don't comment on legal or regulatory matters," DuVally said. Goldman Sachs had defended the transactions in a statement posted on its Website Sunday. The firm said they had a "minimal effect" on Greece's overall fiscal situation." Maybe, just maybe it is time, two years later, for the world to hear something, anything, from the Fed as to what its seemingly quite extensive investigation into Goldman's has yielded.


And as a public service, just to help the Chairman, who very soon will have precisely 15 minutes to prove he can send record Brent prices down by 50% and prevent the European economy from imploding, here is a convenient reminder from the BBC, courtesy of its clip "How Goldman Sachs Helped Mask Greece's Debt.".

You know - just in case someone forgot to hold the Fed accountable for its objective and sincere investigation into the firm, whose former chief economist now runs the New York Fed.

PS: has anyone heard about the whereabouts of friend Christoforos Sardelis recently? The same guy who allowed Greece to engage in the Goldman swaps? Because if one was curious, one would inquire if there were any cross currency swaps that involved Sardelis' Swiss bank account circa 2001 and an offshore Cayman account controlled by a Goldman sub, circa the same time.
Posted by seemorerocks at 13:58