You also have to ask yourself, as did Prof Stephen Cohen recently, who might replace Putin. Most of these people are neo-Liberals or oligarchs who enriched themselves by stripping Russia of its assets.


Why would Putin (or anybody else) build up 'rule-of-law' and democracy when everyone else is dismantling.
Russia will stand up to Putin, says jailed former oligarch Mikhail Khodorkovsky
Opponent confident mass protests and demands for more open democracy will thwart Russian PM's attempts to remain in power 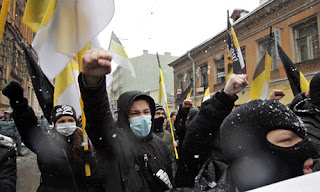 the Guardian,
26 February, 2012
The Arab spring has inspired Russians to stand up to Vladimir Putin, and sweeping political change is possible if voters reject him at the ballot box in next weekend's presidential elections, according to Putin's jailed opponent Mikhail Khodorkovsky.
Writing for the Guardian from his prison cell in the far north of Russia, Khodorkovsky says the leadership around Putin is already quietly caving in to demands for a more open, democratic politics in the wake of the mass protest movement that welled up after questionable elections in early December. He adds that the burgeoning middle class – which will constitute a majority within 10 years – will no longer accept Putin's "managed democracy" as suitable for governing their country.
Khodorkovsky's intervention comes as thousands of protesters turned out in Moscow on Sunday wearing white scarves and ribbons and carrying white balloons and flowers, the colour and symbols of the protest movement calling for Putin's removal from power.
For an hour, they lined the city's Garden Ring, a circular road that encloses the city centre, and held hands to form a human chain. The protesters were joined by thousands of motorists who decorated their cars and honked their horns in support as they circled the eight-lane, 10-mile road.
"They will continue to demand a real seat at the table in a system of democracy and pluralism and they will not take no for an answer," says Khodorkovsky.
A business tycoon who amassed formidable energy assets during the chaotic lurch towards capitalism in the 1990s, Khodorkovsky fell foul of Putin after openly defying his leadership with calls for greater accountability and openness in Russia's increasingly authoritarian body politic. He was arrested in 2003 and jailed two years later for fraud. He has since emerged as a siren voice of freedom and democratic change, though among ordinary Russians who remember him as a billionaire oligarch he is still a divisive figure.
Khodorkovsky said it was clear that the authorities were scrambling to respond to the protests of the past three months, which initially wrong-footed the Kremlin. "The authorities also responded – quietly – with reform, permitting the registration of new political parties for future Duma elections, and election rather than appointment of regional governors. These steps are capable of changing much in Russia, a catalyst, perhaps unintended, for a more fundamental transformation."
Of the presidential elections on 4 March, he said he hoped his compatriots would take "a long hard look" at the alternative candidates. "The last time Putin stood for president he won resoundingly in the first round. We will have to wait to see what happens this time. But let's be clear, if Mr Putin is forced into a run-off, it would be an altogether different situation.
"We have only to reflect on the events in countries swept up in the Arab Spring to recognise the transformation taking place in the compact between the rulers and the ruled." While there are certainly many differences between those countries and Russia, there are some fundamental similarities," the prisoner added.
Khodorkovsky said he hoped a substantial vote against Putin would accelerate the changes that Russia needs: a modernised economy, a genuine civil society, a proper legal code and a more credible assault on corruption.
"Nobody expects this to happen overnight – but next Sunday's vote holds out the chance to end the would-be president's monopoly of power. We should not be afraid. By forcing a second round we will push our country down the path of positive change," he writes.
Posted by seemorerocks at 10:29