About as big as it gets... In the wake of the EU collapse and the unmistakable  collapse-in-progress of the U.S. and the dollar as the world moves quickly to price oil outside of dollars, the Yen is being perceived as a safe-have currency. By "tanking", Zero Hedge means rising in value, another death blow to Japan. For it is only with the yen below about 80:1 (USD) that anybody in the world can buy Japanese exports.
Japan is now (for the first time in thirty years) running a trade surplus. It's manufacturers (the ones that can) hobbled by a lack of electricity  are fleeing the country as the under-acknowledged radiation contamination from Fukushima remains untended and continues to poison all of Japan to the point where crops in far away Okinawa are contaminated.
This is all being coordinated and choreographed according to a timetable. Dmitry Orlov and I will be discussing it on this week's Lifeboat Hour. Europe will go down because of debt, the U.S. will go down over oil and debt, and Japan will all take a huge leap downward at about the same time, which looks to be between March and May of this year.
-- MCR
The Yen Has Been Tanking -- Is This The Start Of Something Big?

Business Insider,
23 February, 2012
Over the past four decades, the Japanese yen has had quite a run.
It used to be that a US dollar got you about 360 yen. Today it gets you about 80. 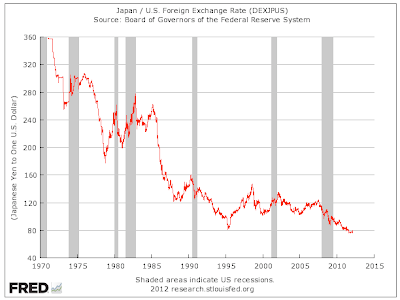 But the at the moment, the yen is in a sharp weakening phase against the dollar.
This chart from JPMorgan's Hajime Kitano notes a real break in a 5-year downtrend of the dollar against the yen. 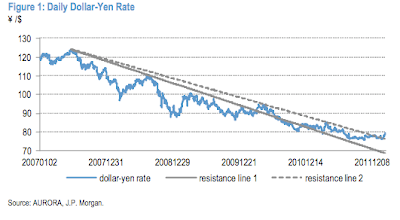 Just to visualize the recent yen weakness a little more vividly, here's a 3-month chart of the dollar against the yen. 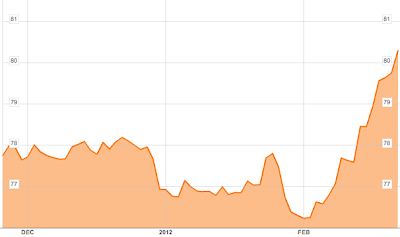 Anyway, because of the country's debt load and weak economy, the yen has been a rather hated currency for awhile, so the recent weakness has prompted some to wonder whether this could be the start of the "big one" -- a real, sustained weakening of the currency.
So is this something, or is it just another brief blip on the road towards more and more strengthening against the dollar?


First of all, part of the weakness is due to the fact that last week, the BOJ joined the world's currency easing game, promising more asset purchases, while announcing an inflation target of 1% (ha!).


But as de Kock and Brown note, this is far from the BoJ's first easing move, and typically they just don't result in much.


Check out all the various moves just in the last 3 years. 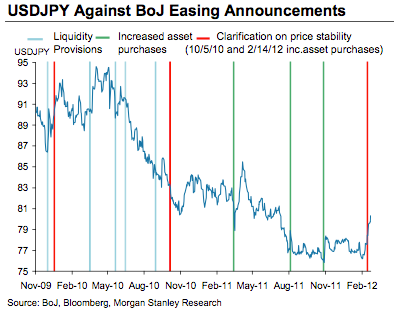 What makes this move somewhat interesting is that it apparently was the result of pressure from anti-deflationists in the Japanese Diet. The fact that there's an anti-deflation lobby in government is interesting, because the knock on Japan is that in a country dominated by old people, nobody can be pro-inflation.


But still, Morgan Stanley isn't buying that this can be sustained:


We believe further political pressure on the BoJ will be needed to sustain the USD/JPY bounce.  Absent such pressure, we think USD/JPY could sink below 80,
disappointing JPY bears yet again.
To date, Prime Minister Noda and Finance Minister Azumi have steered clear of direct vocal support for the anti-deflation coalition in the Diet.  But the appointment of two new BoJ Policy Board members to seats that become vacant on April 4 should clarify their position and the prospects for a more meaningful shift in the BoJ’s policy posture.  Should the Diet appoint aggressive inflation targeters from the roster of candidates proposed by the anti-deflation coalition, more forceful BoJ policies should see USD/JPY well supported at current levels.
However, when all is said and done, we are skeptical that the BoJ could engineer a significant JPY turnaround.  As with the Fed, new BoJ policy initiatives will have little impact on policy rate expectations which are stuck at the effective zero bound.  And even aggressive BoJ balance sheet actions likely will prove ineffectual in raising inflation expectations against a backdrop of persistent deflation.  Thus, with international political constraints in its ability to intervene in the FX market, the BoJ, like the Fed, will have to rely on its policies boosting risky assets and risk sentiment, which could bolster capital.


So in their view, this isn't the start of a big regime change, though it's also worth noting some differences between now and in the past: Japan has been running a trade deficit, and that's theoretically a yen weakener.

Also, surging oil prices don't help a country that's so wildly dependent on foreign fuels. So it's hard to chalk it all up to the BoJ easing or not easing.
Posted by seemorerocks at 14:11