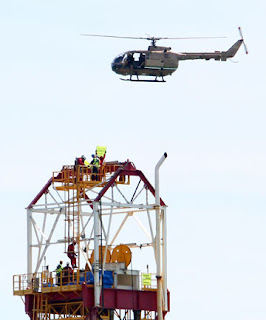 Stuff,
27 February, 2012
Actress Lucy Lawless and five other Greenpeace protesters have been arrested after spending four days on board the Noble Discoverer, which was due to travel to the Arctic in exploration of oil.
Lawless and a group of Greenpeace activists scaled the ship's 53-metre drilling derrick and unfurled banners in Port Taranaki at 7am on Friday.
The ship was scheduled to leave the port yesterday to drill three exploratory oil wells in the Chukchi Sea off the coast of Alaska, but the journey was delayed due to the protesters' actions.
Lawless' involvement drew international attention to their cause.
The police climbed the tower this morning to speak with the protesters, and subsequently arrest them. They did not resist.
Lawless, before being arrested, said the battle to save the Arctic had just begun.
Over the course of the occupation, more than 133,000 people sent an email to Shell executives telling them to cancel their plans to drill in the Arctic, causing Shell email systems to overload repeatedly, Greenpeace claimed.
Police said it was too early to say when the protesters, including Lawless, would appear in court.
Steve Abel, a Greenpeace climate campaigner, who was at the Taranaki port, said it was one of the longest lasting occupations in recent history in New Zealand."
"If there was an oil spill in the Arctic it would be impossible to clean up," Abel said. "This is what this is about."
THE PROTEST SAGA
Shell earlier rejected claims by protesters that it "bombarded" them with loud screams and sounds played over the speakers on the drill-ship Noble Discoverer.
Lawless last night said from the ship that Shell was "going Guantanamo on us".
"They've upped the ante. Shell are getting pretty pissed off, what one could expect."
The protesters were being "bombarded" with the persistent booming sounds from loud speakers, including screams and feedback sounds, she said.
"It's making us howl with laughter. It's going to be a bumpy night."
But a spokeswoman for Shell said the sounds had not been made in response to the protesters, but were just standard procedure.
Normal operations involve work throughout the day and night, she said.
"As part of routine work standard procedure requires the crane's horn to be sounded when the crane moves over the vessel. There was no loud music or other extraneous noise."
Posted by seemorerocks at 14:13