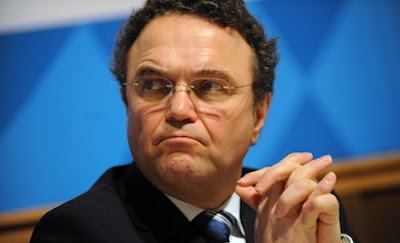 It is possible if not likely we have to suffer through at least 11 more Groundhog days as Greece sets March 8 deadline for investors in bond swap.
Greece has set a March 8 deadline for investors to participate in its unprecedented bond swap aimed at sharply reducing its debt burden, according to a document outlining the offer.
Greece formally launched the bond swap offer to private holders of its bonds on Friday, setting in motion the largest-ever sovereign debt restructuring in the hope of getting its finances back on track.
In the document, Greece said the March 8 deadline could be extended if needed. Athens in the past has said it wants to conclude the transaction by March 12.
Interior Minister Says Greece Should Exit Eurozone
In yet another break in Merkel's ranks, German interior minister Hans-Peter Friedrich says Greece should exit eurozone.


With German Chancellor Angela Merkel facing a parliamentary vote Monday on a second Greek bailout, her interior minister, Hans-Peter Friedrich came out over the weekend in favour of Greece leaving the eurozone.
Friedrich told the news magazine Der Spiegel, “I do not mean that Greece should be kicked out of” the 17-nation eurozone, but he said the bloc should “create incentives for an exit that they cannot turn down.”
Merkel is opposed to Greece leaving the eurozone, and agreed in January with French President Nicolas Sarkozy that Greece should be kept in the monetary union, as long as its government imposes strict budgetary reforms. She expects the Bundestag to approve the second bailout package in a vote Monday.
Friedrich, of the CSU, the Bavarian sister party to Merkel’s Christian Democrats, is the first member of the federal government to have spoken out suggesting a radical change of course in euro crisis policy.
“Outside European monetary union, Greece’s chances of regenerating itself and becoming competitive are definitely better than if it remained inside the eurozone,” Friedrich told Der Spiegel.
Meanwhile, at a meeting of G20 finance ministers and central bankers in Mexico City, German Finance Minister Wolfgang Schäuble said it made “no economic sense” to be “endlessly” pumping money into eurozone rescue funds.
It should have been obvious Germany wanted Greece out of the Eurozone no later than January 27 when Merkel demanded Greece to Cede Sovereignty to Eurozone "Budget Commissioner"


Merkel's Official Denial "I will have no part in forcing Greece out of the euro" Should have made it all the more clear on February 7.
At the same time Schäuble started "Salami Tactics" on German participation (see above link). On February 23, came the Pact With the Devil Over Gold.
Then on February 23 Troika Demands 38 New Changes in Greek Tax, Spending and Wage Policies in Next 6 Days.
Finally, at long last, the German Interior Minister came flat out and stated what previously Finance Minister Wolfgang Schäuble only hinted at, and Merkel herself "officially denied". As I have said many times, Merkel's denial is not plausible. She just not does to be on record as the person causing any country to exit the Eurozone.
Merkel is to be pitied for one of two reasons.
1. She is so amazingly dense that she cannot see that Greece needs to leave the Eurozone
2. She is so concerned about her legacy that she does not have the honesty and decency to say what she knows is true, and she is willing to further destroy Greece in the process.
I vote for door number 2.
Posted by seemorerocks at 13:27