Afghans turn their guns on Anericans

RT,
25 February, 2012
The ISAF commander has recalled all personnel from Afghan ministries after two ISAF members were killed in a shooting inside the Interior Ministry in Kabul. The violence comes as Afghanistan is facing a fifth day of protests over Koran burning.
Gen. John Allen has said that all military advisors are being recalled "for obvious force protection reasons" following the killing in Kabul.
"I have also taken immediate measures to recall all other [Nato coalition] personnel working in ministries in and around Kabul," he said.
NATO is investigating Saturday's shooting, and will find the person responsible for the attack, Allen said.
The UK also responded to the attack in Kabul by temporarily withdrawing all civilian mentors and advisors from Afghan government institutions in the capital. This is according to the British Foreign and Commonwealth Office (FCO).
Meanwhile, the Taliban has claimed responsibility for the deaths in a statement published on their website.
According to AFP, the statement praised “a hero Abdul Rahman" for killing four advisors. However, NATO officials reported two ISAF members have been killed on Saturday.


"After the attack, Rahman informed us by telephone that he was able to kill four high-ranking American advisors," Taliban spokesman Zabiullah Mujahid claimed.
The Taliban representative said the International Security Assistance Force (ISAF) shootings had been carried out in response to the Koran-burning incident.
The International Security Assistance Force (ISAF) confirmed the deaths but has not revealed the nationalities of those killed. However an anonymous US official in Washington said that those killed were Americans.
According to some media, the shooter was wearing Afghan police uniform.
The situation in Afghanistan has seriously escalated since NATO troops burnt copies of the Koran and other sacred texts seized from arrested Afghans in Bagram on Sunday.


Saturday is the fifth days of protests with demonstrations taking place all across the country.
In a separate incident in the northern Afghan city of Kunduz, thousands attempted to storm the UN compound. At least three people have been killed and about 50 injured.


Saturday’s violence has added at least nine victims to the 25 killed in the first four days of protests.

....the attacker was a member of the Afghan military. This is an earth-shattering event for ISAF. Open Season has been declared on U.S. military personnel. This so evokes what happened in Saigon in 1975. This looks as though it will degenerate very quickly. -- MCR
Taliban assainate two U.S. officers outside Interior Ministry 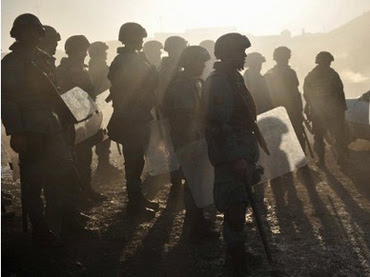 
"This act is unacceptable, and the United States condemns it in the strongest possible terms," Defense Department press secretary George Little said in a statement.


The Taliban claimed responsibility, though NATO and Afghan officials are investigating and have not confirmed involvement by the Islamist militant group. A Taliban spokesman said the attack was in response to the recent burning of Qurans at a U.S. base.


The killing of the officers prompted Gen. John Allen to order all military advisers with the International Security Assistance Force to withdraw from government ministries in the Afghan capital as a precaution.


According to ISAF, initial reports indicated that "an individual" turned his weapon against NATO service members, later confirmed by an Afghan police official to be an American colonel and major.


The two officers were found dead in their office from gunshot wounds to the head, the Afghan police official said. "They were part of the advisory mission there," the official said. "At this stage we can't say why they were killed."


"We welcome President (Hamid) Karzai's statement this morning encouraging peaceful expressions, and his call for dialogue and calm," Obama said in a statement released by the White House. "The United States remains committed to a partnership with the government and people of Afghanistan, as we work to realize our shared goal of disrupting, dismantling and defeating al Qaeda and strengthening the Afghan state."


The investigation into the attack is ongoing, and it was unclear who the shooter was, the Afghan official said. However, it's unlikely that the gunman was an outsider who had infiltrated the ministry, he said.


The attack happened in a separate compound inside the interior ministry where as many as 10 Americans are based, the Afghan official said. Such an attack would have to be planned, he said.


"The perpetrator of this attack is a coward whose actions will not go unanswered," Allen said.
Allen's order for ISAF advisers to withdraw includes the interior and defense ministries, among others, the U.S. official said.


The U.K. Foreign Office announced that British officials working in Afghan ministries in Kabul have also been withdrawn, as a "temporary measure."


ISAF provides advisers in key ministries to help train Afghan officials. It is not clear to what extent ISAF's military training mission was affected by the attack.


Afghan Defense Minister Abdul Rahim Wardak called his American counterpart, Leon Panetta, to offer his condolences and apologized for the attack, Little said. Panetta "urged the Afghan government to take decisive action to protect coalition forces and curtail the violence in Afghanistan after a challenging week in the country," he added.


Zabiullah Mujahid, a Taliban spokesman, said "the attacker is still alive and resisting and a second Mujahid managed to escape the ministry."


"This comes amid our call to all Afghan security forces to turn their guns towards the invading forces who are the real enemies of our country and religion and kill them so they leave our country," Mujahid said in an e-mail.


Saturday's brazen attack at the interior ministry came amid continued protests over the recent burning of Qurans at Bagram Airfield. A military official said the materials burned were removed from a detainee center's library because they had "extremist inscriptions" on them and there was "an appearance that these documents were being used to facilitate extremist communications."


A fifth day of demonstrations over the burning left four civilians dead and 50 injured near the United Nations office in Kunduz, said Saad Mokhtar, head of the city's health department. Twelve police officers were among the wounded Saturday.


Allen addressed the burning issue during a visit to a military base where two U.S. soldiers were killed Thursday by a man wearing an Afghan National Army uniform. A protest over the burning of Qurans was taking place outside the base at the time of the killings.


Allen called on troops to "show the Afghan people that as bad as that act was at Bagram, it was unintentional, and Americans and ISAF soldiers do not stand for this. We stand for something greater than that."


Obama also apologized for the incident.


Muslims believe the Quran is the word of God, so holy that people should wash their hands before touching the sacred book.