Meanwhile, a coalition of Greek businessmen implores global financial and political leaders to support the country with the slogan: 'All we are saying is give Greece a chance' 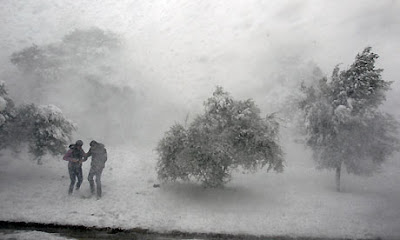 A couple seek shelter during a heavy snowfall on the mountain of Penteli in northern Athens. Photograph: Thanassis Stavrakis/AP
the Guardian,
28 February, 2012
Greece is being battered by a perfect economic storm of recession and debt – and now an unseasonal snowstorm has arrived to add to the country's problems.
As Standard & Poor downgraded Greece's credit rating to "selective default" – the first time an advanced country has been in default since Germany after the second world war – heavy snow and gales closed the main rail line between Athens and Thessaloniki, ships and ferries stayed in port and schools closed.
A coalition of Greek businessmen has invoked the memory of John Lennon and Yoko Ono's famous "bed-in", with a campaign imploring global business and political leaders to support the country as its politicians voted through another round of drastic pay cuts. "All we are saying", says the campaign, "is give Greece a chance".
The campaign is backed by several of Greece's biggest companies, including Aegean airlines, Hellenic Petroleum, Piraeus Bank and a dozen other Greek companies.
It is aiming to win back support from the eurozone to "ensure that the sacrifices made by every Greek under the toughest austerity package in modern history do not go in vain".
The Greece is Changing campaign was launched online as the Greek cabinet met to approve swingeing private sector pay cuts and prepared to vote on Tuesday night on a fresh round of public spending cuts to meet tough demands set by the European Union. The Greek government must vote through more than 80 fresh austerity and reform measures over the next few weeks to secure ongoing support to prevent the country's economy from collapsing.
The launch of the campaign comes a day after Germany approved Greece's second €130bn (£110bn) emergency bailout and the S&P default ruling. Greece is expected to remain in selective default until its debt swap offer as part of a €206bn closes on 12 March.
Nobel prize-winning economist Paul Krugman warned that Greece is "very close to running out of alternatives" to being forced to leave the eurozone.
The new business lobby group warned that "careless rhetoric" about the country could have a "catastrophic effect" on the country's future.
"As we enter our fifth year of recession we want to rebalance the agenda [and] inject some more facts into a debate sometimes overrun by fiction," the lobby group said as it launched its internet campaign. "[Greeks] have already made sacrifices and are ready to do more and just need a chance to change Greece.
The campaign group said Greece has already made good progress in reducing its vast public spending budget. It said more than 85,000 public sector jobs have been axed since 2009, wages have been cut by 30%, pensions reduced by 10% and are due to fall by a further 4% since year.
VAT has been increased on all goods and services, with taxes on fuel, cigarettes and alcohol increased by 33%.
The minimum wage has been cut by 22%, and by 32% for those under 25. Official unemployment stands at 21%, up from 8% in 2010. The real rate of unemployment is likely to be far higher, because only people that have previously been employed are able to claim benefit.
The businessmen implored Europeans to "see through the stereotypes and realise that there is another Greece which believes in modernity, in the stability that being part of Europe brings, that is fighting a battle for change that can be won".
Greek police, firefighters and harbour police staged a rally in Athens on Tuesday night and the country's two biggest unions have called for a demonstration on Wednesday. 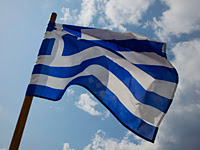