It's Official: S&P Cuts Greece To (Selective) Default From CC 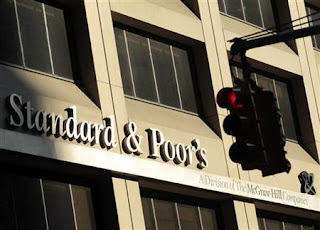 Zero Hedge, 27 February, 2012
Translation: Greece better have that PSI in the bag or else the "Selective" goes away and "Greece would face an imminent outright payment default." Our question for former Goldmanite and current ECB head Mario Dragi: does the ECB allow defaulted bonds to be pledged as collateral within the Euro System?
From S&P
Greece Ratings Lowered To 'SD’ (Selective Default)
Rating Action
On Feb. 27, 2012, Standard & Poor's Ratings Services lowered its 'CC'  long-term and 'C' short-term sovereign credit ratings on the Hellenic Republic  (Greece) to 'SD' (selective default).
Our recovery rating of '4' on Greece's foreign-currency issue ratings is  unchanged. Our country transfer and convertibility (T&C) assessment for  Greece, as for all other eurozone members, remains 'AAA'.
Rationale
We lowered our sovereign credit ratings on Greece to 'SD' following the Greek government's retroactive insertion of collective action clauses (CACs) in the documentation of certain series of its sovereign debt on Feb. 23, 2012. The effect of a CAC is to bind all bondholders of a particular series to amended bond payment terms in the event that a predefined quorum of creditors has agreed to do so. In our opinion, Greece's retroactive insertion of CACs materially changes the original terms of the affected debt and constitutes the launch of what we consider to be a distressed debt restructuring. Under our criteria, either condition is grounds for us to lower our sovereign credit rating on Greece to 'SD' and our ratings on the affected debt issues to 'D'.
As we have previously stated, we may view an issuer's unilateral change of the original terms and conditions of an obligation as a de facto restructuring and thus a default by Standard & Poor's published definition (see "Retroactive Application Of Collective Action Clauses Would Constitute A Selective Default By Greece," Feb. 10, 2012, and "Rating Implications Of Exchange Offers And Similar Restructurings, Update," May 12, 2009). Under our criteria, the definition of restructuring includes exchange offers featuring the issuance of new debt with less-favorable terms than those of the original issue without what we view to be adequate offsetting compensation. Such less-favorable terms could include a reduced principal amount, extended maturities, a lower coupon,  different payment currency, different legal characteristics that affect debt service, or effective subordination.
We do not generally view CACs (to the extent that they are included in an original issuance) as changing a government's incentive to pay its obligations in full and on time. However, we believe that the retroactive insertion of CACs will diminish bondholders' bargaining power in an upcoming debt exchange. Indeed, Greece launched such an exchange offer on Feb. 24, 2012.
If the exchange is consummated (which we understand is scheduled to occur on or about March 12, 2012), we will likely consider the selective default to be cured and raise the sovereign credit rating on Greece to the 'CCC' category, reflecting our forward-looking assessment of Greece's creditworthiness. In this context, any potential upgrade to the 'CCC' category rating would inter alia reflect our view of Greece's uncertain economic growth prospects and still large government debt, even after the debt restructuring is concluded.
If a sufficient number of bondholders do not accept the exchange offer, we believe that Greece would face an imminent outright payment default. This is because of its lack of access to market funding and the likely unavailability of additional official financing. The revised financial assistance program provided by most of the eurozone governments and the Stand-By Credit Arrangement with the International Monetary Fund are predicated on a successful exchange offer.
Our T&C assessment for Greece, as for all other eurozone members, is 'AAA'. A T&C assessment reflects our view of the likelihood of a sovereign restricting nonsovereign access to foreign exchange needed to satisfy the nonsovereign's debt-service obligations. Our T&C assessment for Greece expresses our view of the low likelihood of the European Central Bank restricting nonsovereign access to foreign currency needed for debt servicing.
If Greece were to withdraw from eurozone membership (which is not our base-case assumption) and introduce a new local currency, we would reevaluate our T&C assessment on Greece to reflect our view of the likelihood of the Greek sovereign and its central bank restricting nonsovereign access to foreign exchange needed for debt service. Contrary to the current case, in this scenario, the euro would be a foreign currency, and the Bank of Greece would no longer be part of the European System of Central Banks. As a result, under our criteria, the T&C assessment can be at most three notches above the foreign-currency sovereign credit rating.
Posted by seemorerocks at 01:16