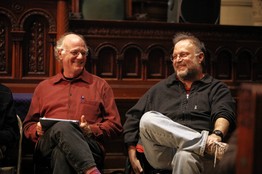 Wall Street Journal, 28 February, 2012
A group of business leaders—including Ben Cohen and Jerry Greenfield of Ben & Jerry's ice cream and former Nirvana manager Danny Goldberg—are planning to pour substantial funds into the Occupy Wall Street movement in hopes of sustaining the protests and fostering political change.
Their goal is to provide some ballast to an amorphous movement that captured the world's attention with nonstop, overnight protests in dozens of cities but has had trouble regaining momentum since most of those encampments were broken up by police in the past few months.
The latest Occupy supporters call themselves the Movement Resource Group and have raised about $300,000 so far to parcel out in grants to protesters, said Mr. Cohen. Their goal is to raise $1.8 million.
A little more than two-thirds was donated by the Ben & Jerry's Foundation and members of the group's steering committee, which includes Dal Lamagna, founder of the company Tweezerman, entertainment-industry executive Richard Foos and Judy Wicks, founder of the White Dog Café in Philadelphia, along with Messrs. Cohen, Greenfield and Goldberg.
The remainder—about $60,000—came from individual donors, including Norman Lear, a television producer and philanthropist, and Terri Gardner, former president and chief executive of Soft Sheen hair products.
"Many of us have been working for progressive social change," Mr. Cohen, a prominent supporter of liberal causes, said Monday. "There's been a critical ingredient missing."
Since its beginning, the grass-roots movement has drawn criticism in some circles of its ambiguous message. Also, some tent cities have had episodes of violence and raised issues of sanitation and public safety.
"I don't think the Occupy movement has put forward a specific agenda. What it hasn't been is a force that can unite," said Josh Barro, 27 years old and a senior fellow at the Manhattan Institute, a New York government policy think tank that promotes free markets.
The group will give grants of as much as $25,000 to protesters across the country after undergoing an application process that begins in March. The group, along with five Occupy activists, will review applications.
Of the money raised so far, $150,000 will pay for rent and equipment for an office in New York for the national Occupy movement. An additional $100,000 has been set aside for individual project proposals, and a small portion of the money has been set aside to provide stipends for people Mr. Cohen describes as "core activists."
Mr. Cohen and other members of the group met with protesters in a Manhattan church Sunday night to pitch the idea to dedicated activists. Not all were impressed, on the theory it would only add bureaucracy.
"Essentially this is a group of very wealthy people who have picked a handler to deal with Occupy Wall Street," said Ravi Ahmed, 34 years old, a protester who works as an academic administrator. "They've re-created what's wrong with nonprofits and philanthropy structures."
Mr. Goldberg, 61, said he agrees with the message of the movement.
"We will try to grow with you and work with you," he said.
Posted by seemorerocks at 12:02